The YMCA in Greenville, S.C. relied on Katazoom to create eye-catching graphics. 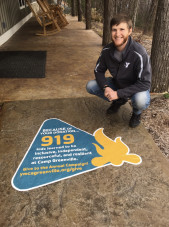 When Andrew Long, business development manager at Katazoom in Greer, S.C., came across the Alumagraphics GRIP material, he saw the potential for a wide range of creative applications. He decided to bring it to a connection he had at the YMCA of Greenville, which runs six locations throughout the area. It was well received, and the rest, as the cliché goes, is history.

“This material is a really neat way to get in front of someone,” notes Long. “It’s a foil material with a printable surface, and then silicon microbeads so it has a grip. I went by and showed [the YMCA], and they said it was ‘cool.’ They were looking for something to put on the ground for a promotion they were doing.”

That graphic designer Long connected with was Almar Flotildes, who notes that the YMCA was in the process of putting together its annual campaign.

“Many of our members don’t realize the scope of what the Y does or even that it’s a mission-based nonprofit,” says Flotildes. “So we wanted our members to quickly understand the impact of giving to our annual campaign to provide scholarships, as well as highlight the wide gamut of our programming — from Exercise is Medicine Greenville, which helps people reverse chronic illnesses, to our Youth in Government program, which organizes model legislatures and United Nations for students across the entire state of South Carolina.” 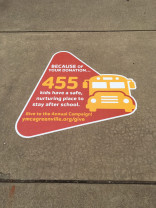 Flotildes went on to note that sometimes, the messaging gets lost with all the various signs, banners, flyers and other marketing materials placed in and around the entry way to the YMCA locations. So the ability to present floor decals in high-traffic areas where they are difficult to ignore was a strong positive. The plan is to keep those decals in place for the short term to get the most impact, then move them to areas that will blend in with the rest of the signage to help reinforce the messaging and free up the high-traffic locations for other campaigns down the road.

“This is really durable outdoor material,” notes Long. “You can walk over it, ride bikes across it, push a stroller over it, etc. We put it in the main thoroughfares of each location.”

Because each location needed its own unique set of pieces, while all being part of the same campaign, Long notes that there ended up being 19 different pieces of artwork. Each of the six locations got 4-5 different versions of the art that were installed around all the high-traffic locations. Flotildes designed and provided the final art to Katazoom, who then printed, cut and installed everything.

Long worked with the executive director at each location to identify the best locations at each individual YMCA. “We were a link in the chain,” he notes. “They needed a partner to get it printed and installed, and we could do that. This was a new opportunity for us — I had never worked with [Flotildes], although I had worked with other YMCA locations in South Carolina. So this was a big deal — we had never produced a project of this scale for the YMCA before.”

Overall, the project took several months from concept to installation, and Flotildes says that throughout the entire process, he trusted Long and the Katazoom team. “As a designer who’s mostly working and creating collateral that is 2D, working in a more interactive medium like clings and decals is fun because it’s a learning process. I heavily relied on Katazoom to recommend the right materials for our purposes to make that learning process a bit smoother. And so far, we’re pretty happy with how the graphics turned out.”

In fact, the YMCA is so pleased with the results of the project, Flotildes says he is already thinking up ideas for the next project they can do with Katazoom. The chance to work with new materials, and to collaborate with the print shop as a full partner, he notes, will likely mean “even better and more innovative pieces that not only look good, but are informative, interactive and impactful.”

Katazoom was founded five years ago by Tom Hyll, selling custom cut vinyl wall decals on Amazon. The company then expanded into signage and vehicle graphics, and Long notes that when he joined the team, they began to focus more on fleet graphics, environmental branding and interior graphics. It is an HP Latex shop, and the YMCA project also made use of the company’s Graphtec router to cut the custom shapes and designs.

#RyansRemarks: Leadership Matters to Everyone