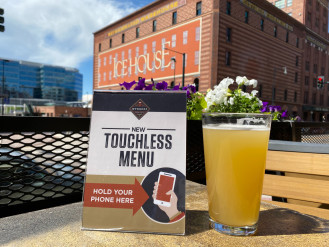 The Denver-based Breckenridge-Wynkoop Restaurant Group has started using InfoLnkx in Wynkoop Brewing and both locations of the Cherry Cricket restaurant. | Credit: SpeedPro

An interactive graphics technology that SpeedPro developed to improve customer experiences is helping re-opened restaurants and breweries deliver menus to patrons via their smartphones. The NFC-based InfoLnkx technology eliminates the need for restaurants to create disposable, single-use paper menus to prevent the spread of viruses.

The InfoLnkx-enabled posters, decals, wraps, and tabletop graphics could support post-COVID public-health functions and customer-experience innovations in other venues. For example, it could reduce long lines at stadium concession stands. Fans could use their smartphones to order food and drink from their seats and either pick it up from a counter or have it delivered to their seats.

Or, museum visitors wouldn’t have to touch an interactive digital kiosk that has already been touched by hundreds of other people to get information about an exhibit. By holding their smartphones near a poster that includes a pre-programmed NFC tag, information about that exhibit would pop-up on the screen they carry with them at all times.

All of the information needed to use InfoLnkx would be provided by colorful graphics in high-traffic entryways, exhibit spaces, or at individual seats.

The system uses programmable NFC (Near Field Communications) tags which are applied with stickers to a printed graphic. The tags could be used with all types of graphics, including posters at the entrance to a facility or graphics on a seat or tabletop. Most visitors to restaurants and stadiums wouldn’t need to download an app to interact with the printed graphics because newer-model phones already include the ability to read NFC tags for contactless payment systems.

With the InfoLnkx system, users simply place their phone near a designated portion of the graphic to activate the on-screen messaging that the client has programmed.

“We like NFC technology far better than a QR code,” said Speed Pro CEO Larry Oberly. “Because even with a QR code, you still have to open your phone’s camera app.” It’s also more efficient for applications such a in-seat ordering in a stadium. Instead of printing and applying stickers with individual QR codes for a 5,000-seat stadium, the client would simply program the NFC chips for specific seats in the stadium.”

In addition to menus, the mobile-device content could include discounts, wayfinding directions, or updates. For example, breweries could use the technology to inform customers when a specific craft beer or other menu item was temporarily unavailable and recommend an alternative.

According to Oberly, the InfoLnkx technology has been in development since SpeedPro launched an innovation study and project in March of 2019. The goal was to enable SpeedPro large-format printing studios throughout the U.S. to offer clients products beyond large, impactful color graphics.  By putting some technology behind their printed graphics, they could help clients improve direct engagement with each customer.

One SpeedPro studio owner, Lauren Ziegler of SpeedPro Innovations in Reading, Pennsylvania, had already started investigating smart signage options. She says, “I saw a similar communications technology in a different application and thought it might be something that could easily be implemented in our wide-format printing techniques.” 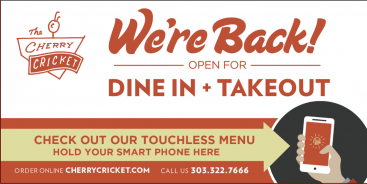 To help move the nationwide project forward, Oberly hired EdgeDweller, a business-growth consultancy that advises businesses seeking “Intentional Innovation.®” Creative technologists at EdgeDweller helped SpeedPro work out some of the details of planning and executing the InfoLnkx system.

Ziegler helped make sure the project team purchased NFC technology that would best serve the wide-format graphics workflows of SpeedPro studio owners like herself.

The Denver-based Breckenridge-Wynkoop Restaurant Group has started using InfoLnkx in Wynkoop Brewing and both locations of the Cherry Cricket restaurant. This initial activation is enabling SpeedPro and the restaurant group to fine-tune how and where the usage messaging should be conveyed.

“Smart signage is a way to improve the user experience” says Oberly. Although it can be used in all types of hospitality settings, events, and retail stores, “Right now we are focusing on restaurants, because the touchless menu technology helps them prove they are serious about the health and safety of their guests. There is a pent-up demand among customers to get back into restaurants and we want to help them be as safe as they can.”

SpeedPro studios in several cities have started suggesting innovative applications to their clients. For example, Ziegler has shown museum clients how it might be used to provide exhibit information in art galleries. And she is showing how an agency that advocates for the disabled could use an InfoLnkx-enabled elevator wrap in a stadium to build a platform for connection and communication among people with disabilities.

According to Ziegler, the technology is simple to use once you understand the building blocks of how to interact with the tags: “We use tools that allow us to get a sophisticated experience” from the NFC tags. Then, all it takes is some problem solving in order to integrate the chip into the signage.

“InfoLnkx allows for a nearly limitless outlet to engage the public,” said Ziegler. “Having an easy way to access digital content allows my customers (and their customers) flexibility and an increase in available information. “Like me, my fellow SpeedPro owners are using InfoLnkx to add a uniquely flexible element to our already robust wide-format offerings.”

Eileen Fritsch is a Cincinnati-based freelance journalist who has covered the evolution of wide-format digital printing for more than 20 years. Contact her at eileen@eileenfritsch.com.

What You Should Know About Wearables

Printed Electronics is the Technology of Tomorrow