Kelly and Matt Kettler, owners of SpeedPro of Fort Collins, didn’t come to their business from sign and graphics backgrounds. She worked as a registered nurse, he worked in marketing and brand management, and they came to own their business with the help of a business consultant. Their goal initially was to move from small-town Sidney, Nebraska to small-city, Fort Collins, Colorado. Investing in a sign and graphics franchise, which took place back in 2014, is what got them there. 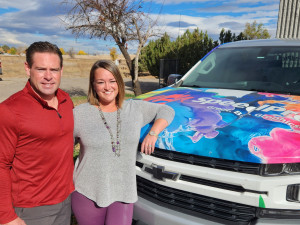 Matt and Kelly Kettler, owners of SpeedPro of Fort Collins, a Colorado-based sign and graphics producer.

SpeedPro of Fort Collins provides a wide range of sign and graphics products, a majority of which are produced in its production space, which includes a bay for the installation of vehicle graphics. Dye-sublimation work, says Kelly Kettler, is farmed out to another producer. The shop’s production area includes an HP 560 Latex latex-based printer, a Roland XR640 solvent-based printer, a laminator, and other tools common to sign and graphics businesses.

The disruptions and challenges brought about by COVID-19, the Kettlers say, are lessening. For instance, Matt Kettler says, the company is ramping back up with its production of trade-show displays, an indication of the return of public events. Further, they’re seeing more vehicles coming in for graphics, requests for more banner-stand displays, and, Kelly says, “more interior branding for employee engagement.”

Like many business owners in the graphics segment, they find they are spending more time locating materials. This reality, in some cases, led to them buying what they needed when it was available, as opposed to when they needed it. They are also experiencing higher prices on materials. Matt says wrap kits now cost “30 to 40% more,” and it may take an extra week to get them. He says delays have, in some cases, caused the company to shift its brand alliances for materials. Customers, Kelly says, have been understanding about supply-related delays.

Though they have been reluctant to do so, the Kettlers raised prices early this year, but not to a degree that matches recent increases in production costs. “We’ve done two price increases in eight years,” Kelly says.

Business survival during the pandemic took both creativity and flexibility. One phenomenon the Kettlers noticed during COVID was bartering. Kelly related the story of a local brewery that bartered beer for signage. Similarly, Kelly says, restaurants bartered with gift cards. Another development they saw was increased involvement in real-estate signage during the robust sales environment of 2021. This included not only the production of signage – often on Coroplast – but also in warehousing it and placing it when a house went up for sale.

Even in a small city, Matt says, there is plenty of competition for work, though he notes that each graphics company serving Fort Collins, “has a niche. We even get some work sent to us from the competition.” In the Northern Colorado market, he says, it is not uncommon for employees to have also worked for other companies in the area.

SpeedPro of Fort Collins also possesses a charitable side. It is a strong supporter of Realities for Children, a local charity that provides emergency and ongoing support for children who have been abused, neglected, abandoned, or are at-risk. In recognition of its strong support of the charity, SpeedPro of Fort Collins was named its 2022 Business Member of the Year. Realities for Children currently has 260 business members, who offset operational costs, says Kelly, “so all donations can go directly to the kids.” Among the efforts undertaken for the charity is providing prints for events and auctions.

Looking forward, the Kettlers would like to grow the business to the point where they could focus on its strategic direction, and to have others focus on the day to day. “We would like to unplug,” Kelly says, “but we always want to be client-facing.”

Inspire Your Team to Be Their Best

The Opportunity of Applications, Part 2

Strategic Factory: ‘Can do. Will do. Happy to!’
Comments
Subscribe
PRINTING United Expo