Most people in the wide-format space would agree the work they do is creative, and it is. For most companies, the creative piece — for graphics producers — comes from the deep knowledge of the capabilities of materials, prowess in finishing, and selecting the right imaging technology for the job. It is a creative step within a broader process, and it is something successful companies in this space must understand. For those operating at the top end of the segment, the creative partnership is often “cranked up to ten” through inspiring, innovative print applications placed in locations of the highest levels of visibility. 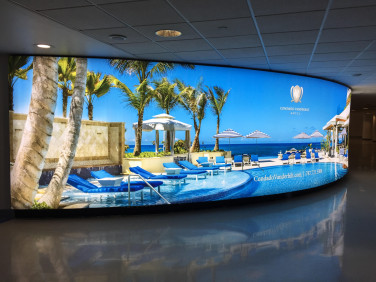 Backlit displays, like the one shown here, add "pop" to retail and other settings. | Credit: Duggal Visual Solutions

Duggal Visual Solutions, located in New York City (with locations in Manhattan, Brooklyn, and Long Island) — with facilities in Portland, Ore., and Los Angeles — is one of those companies. Since being incorporated in 1963, it has become a globally renowned supplier of top-notch printed visuals, custom displays, and multimedia solutions. In addition to serving a broad range of global retailers and Fortune 500 companies, it also works extensively with museums and galleries, as well as direct collaboration with visual artists, photographers, and designers. Current CEO Michael Duggal joined the company in 1995 and took over operations as CEO in 2002. He refers to the company as a “full service visual communications company, from concept to production to installation, with all in-house.”

Duggal says that operating in New York City has its challenges and opportunities. As a native New Yorker, he is familiar with the city and how it works. While New York City is well-known for expensive real estate, taxes, and labor costs, he speaks positively, stating that the company is surrounded by creativity in every form: museums, galleries, design firms, architects, innovative flagship retail, and a clientele of talented people who “appreciate the difference between something done well, versus something that is just completed.”

The company is divided between three main segments. The core produces high-quality visuals and fixtures for a clientele that is extremely image conscious, in jobs of all sizes. The company is as adept at producing unique pieces for art galleries and museums as it is at handling rollouts to 1000+ stores. It operates more than 30 wide-format devices, allowing maximum flexibility via technology choice. The Duggal Retail Center, located in Manhattan’s Chelsea neighborhood, is a space where artists and photographers can gain access to technologies that assist them in expressing their creativity in new and exciting ways. Finally, Duggal’s Innovation Lab hosts an experienced team of designers and technologists who serve as consultants to help customers realize their ideas and vision by helping them maximize Duggal’s technical and technological skill sets.

While the innovation team at Duggal Visual Solutions works regularly with customers to make their visions reality, they also work to minimize production costs and maximize customer satisfaction. As an example, Duggal mentioned that by making one product just slightly smaller, the company was able to avoid seams, which would complicate fabrication and minimize visual appeal. Further, he shares that the company utilizes a wide range of materials, and has more than 30 different production departments under its roof. The result is an impressive number of combinations that can be used to ensure a “right fit” for every customer.

While, within our industry, Duggal Visual Solutions can be generalized as a “signage and display company,” the company goes much deeper than that. It’s services include a CGI motion and digital studio, 3D printing and the creation of packaging comps, digital signage, and multimedia production, as well as exhibition and event production and management. This approach helps the company to meet its customers where their need is greatest, and allows them to explore new technologies and applications with a trusted partner. The Duggal Greenhouse was repurposed for the assembly of more than 2.5 million face shields for medical teams and first responders. | Credit: Duggal Visual Solutions

In addition to operating its design and production facilities, Duggal Visual Solutions also operates the Duggal Big Picture Foundation, a 501(c)3 nonprofit corporation that both supports charitable organizations and is a patron to the art world. Further, the company launched the Duggal Greenhouse in 2012, a 35,000 sq. ft. event space located in the Brooklyn Navy Yard. The Duggal Greenhouse, which has been utilized for private functions, fashion shows, live events, and television/movie production, has also served as a venue into which the company could design and produce event graphics. During much of 2020, the company used this location to produce and distribute more than 2.5 million face shields, and more than a half million medical aprons for first responders and health care workers battling the COVID-19 pandemic.

Asked to reflect on the company and its future, Duggal proudly states that the company is “creative first.” He speaks of the passion of the company, its culture, and its team; of how it is a creative company run by creative people. Part of the beauty of the wide-format segment, Duggal says, is that there is constant change. By working at the leading edge of that change, the company has, for instance, found itself ahead of the adoption curve, and also ahead of those who approach change more cautiously. Duggal says that while others are working to figure out new technologies, his company has often already established credibility in that space.

This approach, he adds, is not for the faint of heart, stating the company “breaks things early” and experiences heavy up-front costs that, while painful, help them not miss out on emerging technologies, opportunities, or applications.