The Creation of a 2D Restaurant with Wide-format Graphics

Vegan Junk Food Bar, based in Amsterdam, is a bright, bold colorful brand with food that literally seems to pop off the plate. To help make that food the true star, they worked with Canon Solutions America to create a unique 2D restaurant concept that became as much of a draw for patrons as the delicious items on the menu.

Kris Walewijns, Global Strategy & New Business Development Manager at Canon Production Printing, notes that the partnership with the restaurant, which has six locations, began with a marketing push for the latest Canon printers.

“We approached a creative agency and gave them the task to create something colorful and cool. It couldn’t be boring — everyone was bored sitting at home, so it needed to be spicy and young. That was the brief. And they came back and said, we have friends in Amsterdam with a restaurant chain.” 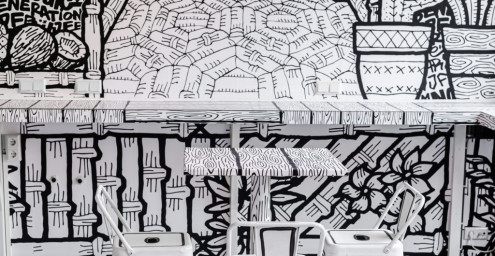 Vegan Junk Food Bar’s graphics are bright and bold, and they ultimately agreed to allow Canon to use their imagery in the rollout for the latest UVgel printers. While the marketing push didn’t use the restaurant’s exact photos, they did base the entire campaign around bright and colorful fast food, and the result, notes Walewijns, was that everyone was happy.

“And then, two months later, they came back and said, ‘we did you a favor, now you can return it,’” Walewijns says.

The chain, he points out, wanted to experiment with its graphics a bit, and had an idea for a bold black-and-white design that it hoped would make the colorful food really stand out. “They called it a 2D restaurant, and the idea was a whole background in black-and-white, almost like a cartoon drawing,” says Walewijns.

The result was a truly unique concept, that drew in fans from all over who didn’t just want to taste the food, but wanted to interact with the brand, taking and posting photos on social media platforms around the world.

Part of what makes the concept so striking is that nothing was left out. “Everything up to the toilets is in the theme,” says Walewijns. “From the ceiling to the floors, to the tables and to the fridge, everything is in black-and-white linework without any depth. The effect is ultra-cool.”

It might seem like simple black-and-white linework would be the work of nothing to create and install, but Walewijns notes that the simplicity is incredibly deceptive. “If you’re just a millimeter off, you notice,” he says.

The Canon Colorado 1650 with UVgel technology was used to print everything for the project, which Walewijns notes was possible because the material doesn’t shrink or expand during printing on the machine because it uses no heat, allowing them to create highly precise graphics that would line up correctly when it came time for the installation.

But the challenge of ensuring an entire restaurant of linework was correctly aligned wasn’t the only obstacle the project had to overcome. Walewijns notes that the entire thing was printed and prepared by Canon in a day, and then a local company had just a single day to get it all installed.

“They were only prepared to close the restaurant for a single day,” he notes, “we it was all installed in just under eight hours. The professional installers came in the morning, and by late afternoon it was all done, and the next day the restaurant was open again.” 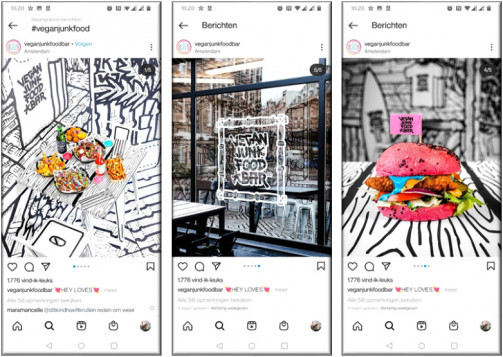 Vegan Junk Food Bar had intentionally chosen one of its smallest locations, which is more along the lines of a burger joint, for this test of the new concept, but already they are planning to roll it out to additional locations after it proved to be incredibly popular with everyone who visits. The next location they are planning to open is in Cologne, Germany, which will have a third of the restaurant dedicated to the new black-and-white graphics, with the rest remaining the bold and colorful graphics the brand is known for.

“The black-and-white attracts a lot of people in, but once they eat the food they want to leave. So, it is great to encourage traffic, but the one opening in Cologne they also want to have a lounge area,” says Walewijns. “Since it lacks any depth of vision, after a few hours you start to get a headache,” he explains, so having a location that takes the best of both concepts and combines them will allow the location to draw in foot traffic, while still being a fun place to hang out for those who want to stay longer.

Since the initial installation in September, Vegan Junk Food Bar has only had to replace the floor graphics, which Walewijns notes is because the graphics weren’t laminated because the inks are very scratch resistant, but being in a restaurant with food and beverages, the while portions got dirty. He notes that he isn’t sure if the replacements were laminated for durability or not, since a local PSP has taken over the account “since we don’t want to be in competition with our customers,” he says.

The result is a very unique restaurant concept that has been so well received it is being carried into more locations as Vegan Junk Food Bar looks to expand. The food truly does seem to jump off the table, giving visitors the feeling they are stepping into a comic book. It is a great example of just how much of an impact graphics can have on a business, and how making bold changes like this can help a brand truly stand out.

How Did COVID-19 Impact Catalogs?
END_OF_DOCUMENT_TOKEN_TO_BE_REPLACED