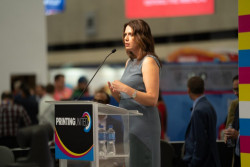 “People, power, technology, and innovation are driving what we are doing today,” said Jordan-Smith. “It doesn’t matter what the channel is, the value is carried forward through partnerships and alliances. It’s about inspiring the customer to do more.”

To that end, Jordan-Smith brought three customers with very different paths to share their success stories.

Brad Books, managing partner, Capitol Blue Print, explained that his family-owned business started off in the engineering and architectural printing market, but that it quickly morphed. Blueprints are now only about 5% of his total revenue, he said. The company replaced two competitor monochrome machines with one RICOH Pro 8200, and added a RICOH Pro C720e Graphics Arts Edition color press to its lineup.

“Customers want quick turnaround,” said Books. “They want their jobs done in 2-4 hours. And they want it for a reasonable price, and top-notch quality. We say we can deliver on two of the three, but since we added the Ricohs, we’re now closing in on 2.5 out of three.” He noted that they also saw an immediate reduction in running costs and expenses that helped boost profitability.

Andy Chagan, account executive, Tri-Win Direct, said that Ricoh technology allows them to process high-volume direct mail jobs faster and more efficiently than they ever could before. He gave one example of a 50,000-piece job that would take around 40 hours to produce, and can now be completed in just 6-8 hours on one of the two RICOH Pro VC60000s the company operates. “This allows me to compete now with much higher volumes, and much larger runs,” said Chagan. “It has generated significant revenue for us. It’s been a game-changer.”

For Mark Cohen, CEO and founder, MAC Specialties — which recently installed the first RICOH Pro TF6250 flatbed press in the U.S. — Ricoh has allowed the promotional products and POP display manufacturer to stay ahead of the technology curve. “We are dealing with a generation that thinks the world is like a Star Trek replicator — everything is push-button,” said Cohen. “We’ve gone all digital over the years, and we invest in faster turnarounds to meet demand. Push a button, and out comes product — little by little, we’re getting there.”