Retail Signage in a Post-COVID World

As of mid-March, 20% of the U.S. population has had at least one dose of the COVID-19 vaccine. President Biden has publicly said his administration is pushing to have the vaccine available to every adult in the country by May, with production ramping up and distribution being streamlined. And with this comes a slow relaxing of restrictions that will, hopefully, mean that by summer we will start to see a return of something akin to “normal.”

But what does that mean for retail, and how will that impact the wide-format and signage printers who serve them?

The past 12 months have been marked by a number of changes, and retail was one of the industries hardest hit by closures and quarantines. Overall spending dropped by 10%-15%, in general, according to a number of surveys, although some of that was made up in massive spikes of e-commerce sales — but not all. Some categories, such as housewares, consumer electronics, and toys were the strongest, reflecting a need to try and entertain at home, and make life more comfortable. Other categories, like fashion, saw steep drops as people held off investing in items that would languish in closets while waiting for the world to open up again. But there is a glimmer of hope — as the latest round of stimulus payments begin to roll out at the same time stores are starting to toe the line of reopening, the pent up demand for retail shopping will likely increase.

That said, nearly every study done thus far has shown that vaccines and stimulus payments aren’t going to be enough to completely overturn the changes COVID has wrought on retail. Across the board, consumers have said that while they are looking forward to being able to shop in person again, they aren’t going to give up e-commerce. It was a growing trend before the pandemic hit, and the past 12 months have broken down nearly all of the barriers that held online shopping back as a platform. This means retail stores will have to provide something unique and different to entice shoppers through the doors, rather than just interacting via a website. 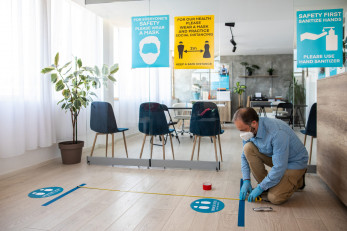 One of the primary tools retail locations will have in their arsenal for getting customers back through the doors is to create unique and engaging experiences. Experiential marketing isn’t new, but it will take center stage as the world reopens, seeking to give consumers a reason to overcome the wariness of public spaces that COVID has instilled in us all.

5 Questions to Ask Before Adding POD to Your Shop

How Did COVID-19 Impact Catalogs?
END_OF_DOCUMENT_TOKEN_TO_BE_REPLACED