The challenges of producing a live event in the midst of a pandemic.

Print service provider bluemedia isn’t a stranger to the Super Bowl. They have worked with the NFL since 2014 on the event, producing and installing graphics for the stadiums, hotels, parties, and other events that surround the league’s biggest annual game. But 2021 wasn’t an ordinary year, and while the game did go on, it wasn’t business as usual, requiring creativity and innovation throughout the process. 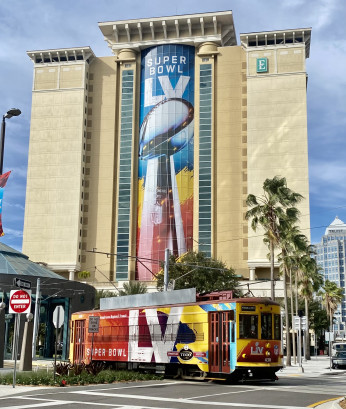 R.J. Orr, bluemedia’s executive vice president and partner, notes that one of the biggest changes in 2021 from a usual year “was the fact that there wasn’t a lot of ancillary events or parties.” Usually, he notes, after the stadium graphics everyone sees on the live television broadcast, one of the next biggest pieces of the print puzzle is on-location experiences — everything from exclusive hospitality centers for the high-end ticket holders, to spaces for the teams and their guests to relax and have fun around the game.

“This year,” he notes, “they limited fans, so the high-end ticket percentage was drastically reduced and a lot of those parties didn’t happen.” The private on-location team experiences didn’t happen at all, he says, and the big activation events that typically happen around the city in the week leading up to the game by sponsors were all either not held or scaled way back.

One of the bright spots? The Tampa Bay Buccaneers were one of the teams playing, and the event was at their home city, in Raymond James Stadium, so the city, and the team, did have some smaller celebrations. “With the Bucs in the Super Bowl, it helped,” says Orr. “There was a lot of buzz surrounding that, and hoopla versus if two other teams had gotten in. We ended up missing out of a lot because of COVID, but there was still some opportunity to make up for it.”

Like many sporting events in 2020 and into 2021, the Super Bowl decided that since fans couldn’t be there in person, it would offer an alternative. There were limited tickets sold, and local first responders and healthcare workers who have been vaccinated were given tickets, but that still left a lot of empty seats. The solution? Cutouts. 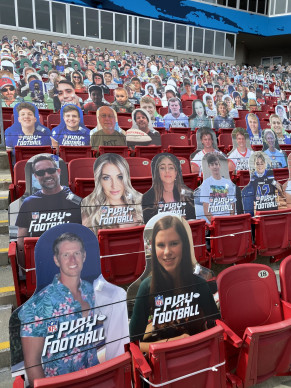 To ensure the stands looked full when viewed on television, bluemedia produced, Orr notes, 30,000 fan cutouts for the big game. The NFL purchased a large block of them to donate to the community — 20,000 went to cancer survivors, those in the military, and youth groups, among others. A small number were curated celebrities. And then 10,000 were sold to fans of the Bucs and the Kansas City Chiefs. “It ended up looking like a full stadium,” says Orr. “If there wasn’t a live body in the 100 or 200 level, it was a cutout, and there was 75-80% coverage of the rest of the seats.”

In fact, he laughs, the NFL got calls after the game from those complaining that they had allowed a packed stadium during a pandemic. He credits the work his team did to make the cutouts look as real as possible for that illusion, and considers that a success. He notes that bluemedia choose not to do them with a white, uniform border, but rather to ensure the photo was full bleed to the edges, with a lot of color variations that lent itself to a more realistic final product. In addition, he notes that they were printed on coroplast, and after the game was done, bluemedia and the NFL worked with a local company that takes in waste and uses it to produce energy, so none of the cutouts ended up in landfills.

Printing and installing graphics for the Super Bowl is never a leisurely project, notes Orr. But this year had additional challenges, since they weren’t even entirely sure certain elements, such as the cutouts, would even happen until the end of the 2020. “We worked with the NFL in late November, and made the decision to move forward in December,” he says.

“We launched the first community site a couple of days before Christmas and went out to the community groups, and then kept the pedal to the metal. We started producing on January 4, but we still had a lot of work reserved for the teams. We didn’t find out the final teams until January 24, and then had just two weeks to get those done.”

To get the job done, Orr says his team worked around the clock, with a 24-hour cycle to print everything, get it shipped to Tampa, and get it all installed before the big game. bluemedia doesn’t just do the printing, he notes, the company also handles all of the installation and teardown after the fact, which is an extra challenge. And to add to the stress, the morning of the game, he notes, it rained heavily until 7pm — if the graphics, such as the cutouts, had been made from cardboard or another non-waterproof material, “it would have been a nightmare.” 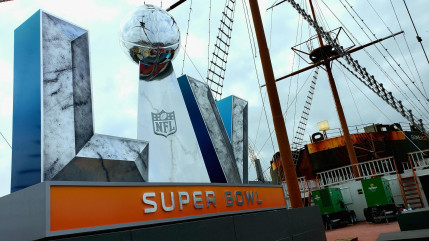 The job encompassed more than just cutouts, however. One big challenge for a Super Bowl is always transforming a stadium from a team’s branding to the NFL and Super Bowl branding, made more difficult this year because it is the home stadium for one of the teams. “Some older venues are cleaner, and don’t have a lot of team-specific branding,” says Orr. “Raymond James Stadium is the opposite — there is Tampa stuff literally everywhere, down to the logos on trash cans.”

Since the NFL didn’t want to give the appearance of an unfair branding advantage to one team, even if it is their stadium, bluemedia had to ensure every single Tampa logo was covered, and the entire venue was turned into a Super Bowl 55 stadium for the duration. That includes all the interior and exterior signage, and requires working with outside vendors as well to ensure the entire campus is converted before the teams and guests start to arrive. It also meant covering up the team’s local sponsorship elements in favor of the NFL and Super Bowl sponsors — for example, Raymond James is a Coke stadium, says Orr, but Pepsi is the official Super Bowl sponsor. So thousands of logos had to be covered.

Another big printed element is the perimeter fence, a temporary structure put up for security during the game. This year, says Orr, the fence was about six miles long, and stood eight feet tall, making for a large, and impressive, printed project.

In the end, says Orr, the full installation started on January 12, and was completed for the game on February 7, with the only day off for the team on the day of the AFC and NFC championship games, where the final two teams were decided. The base install team, he says, is around 40 people, with 20-25 coming from bluemedia, and the rest coming from a crew of subcontractors the PSP always uses for the Super Bowl project. Then, he says, they hire around 50 temporary laborers from the local market to fill in any additional gaps — this year that included getting all of those cutouts into place.

Even with COVID impacting every element of the game and installation, there were still some graphics that needed to be produced and installed outside of the stadium itself, which bluemedia also handled. That included a décor package at the airport, three sky bridges in Tampa, a trolley, 1,000 light pole banners, and a full building wrap. The PSP also produced a banner for the convention center and a city décor package that included a 4.5 minute video that was projected onto the side of the Rivergate Tower building every night leading up to the game, and a congratulations message that night right after the game ended. 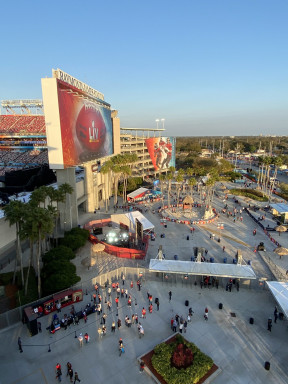 “That was about 150 feet wide by 200 feet tall — it was pretty cool,” says Orr. “We also did a big performance piece. Tampa has a pirate ship, the Gasparilla, that they use for a lot of events. We built a huge sculpture of the trophy that was 16 feet tall on it, and had 150 flags, with a nightly laser light show with fireworks and music.”

In fact, Orr notes, multimedia isn’t new to bluemedia. The company has a full tech division to handle big activations like the Super Bowl, and offer unique experiences to go along with all of the printed elements, including building projections and 3D domes.

The NFL also had bluemedia handle the graphics for the headquarters hotel where the staff and sponsors stay, along with both team hotels. The Tampa Bay Convention Center served as the media center for this year’s game, where the press goes to get their accreditation and pick up their passes to attend the game — bluemedia ensured that space was completely branded for the NFL and Super Bowl 55 as well.

Overall, Orr says that bluemedia produced a staggering 60,000 individual pieces for the Super Bowl this year, totaling more than a million square feet of material. It was all printed in the company’s main facility in Phoenix, on a wide range of equipment including large-format presses from Durst, EFI, and even some old Scitex machines, says Orr.

“I’ll use partners here and there for local stuff or last minute stuff, but the majority of everything is produced in Phoenix and shipped out,” he says. “We have an amazing shipping department — they were working almost 24 hours a day. In your average sign shop, they probably do around $1 million per year in work — we were doing that in a month. Granted, there’s a lot of buildup that goes into it, but we don’t start producing until December for the non team-specific stuff.”

For the team-specific elements, he notes that they have the graphics ready to go for all four of the teams in the playoffs, so they are ready to start printing as soon as the winner is declared, and they start installing just a few days after those games are decided. It makes for a fast-paced and challenging environment, with a well-coordinated team both in the print shop and on site to ensure no detail is overlooked.

Now that the game is over and Raymond James is once more a Tampa Bay Buccaneers stadium, bluemedia took a few moments to breathe before starting to work on Super Bowl 56. Orr notes that work on that will begin in early April, with the 2022 Super Bowl scheduled to happen in California. And while he notes that it’s still too early to know how COVID might impact that game, he is hopeful that by then, we’ll be back to more of a normal event.

The Super Bowl is an American institution, and for decades now, bluemedia has helped the NFL ensure every printed detail is perfect. It is a job the shop and its employees love to work on, with every year bringing its own unique elements and new challenges to overcome. Despite a global pandemic, Orr is proud of the work his team did to ensure the 2021 event looked as great as every other year, and is already looking forward to what next year will bring.

How Did COVID-19 Impact Catalogs?
END_OF_DOCUMENT_TOKEN_TO_BE_REPLACED