Travel and tourism bureaus use out-of-home (OOH) advertising as part of holistic, multi-channel marketing campaigns because big, enchanting images of uncrowded beaches, powdery ski slopes or serene forests are hard to miss when you’re stuck in traffic after a stressful day at work. 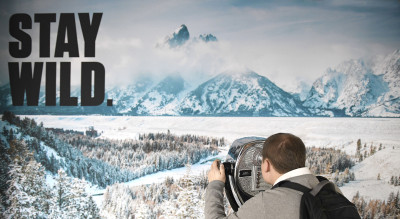 But OOH campaigns today aren’t just about creative on digital signs or classic billboards, says Adam Cadwallader, of oOH!media in Australia. “Today, data can be used to plan fully integrated advertising campaigns that can engage viewers in locations that are contextually relevant. Printed and digital signage can amplify the reach and messaging of digital and social media.” The goal was to help boost year-round tourism. Attracting visitors is easy in the summer because Jackson Hole is about 60 miles from Yellowstone National Park. Summer visitors enjoy fishing , hiking, bicycling and viewing wildlife such as elk, moose, bison, bears and eagles. Over 97% of the Jackson Hole area is federally owned or state managed, including the Grand Teton National Park, the Bridger-Teton National Forest and the National Elk Refuge.

But tourism levels dip during the winter even though Jackson Hole offers world-class skiing and isn’t as difficult to get to as people imagine. Non-stop flights to Jackson Hole are available from 12 major U.S. cities.

“We chose the slogan ‘Stay Wild’ to speak to people who wanted to go to wild places,” explains Dustin Black, the Colle McVoy creative director who led the project. “We also wanted to speak to Jackson Hole residents who want to preserve the wildness and beauty of the surroundings.” Specially designed posters, hats and T-shirts encouraged locals to honor the raw, rugged nature of the Jackson Hole region.

To tap into the authenticity and rustic spirit of Jackson Hole, the two outdoor wallscapes on buildings in San Francisco and New York were painted by artists from Colossal Media, a firm dedicated to preserving the art of hand-painted outdoor advertising.

Colle McVoy opted not to use technologies such as grand-format digital printing and geo-fencing for mobile connections because they didn’t want the wall murals to seem too slick. “Jackson Hole is not about being slick,” Black says. 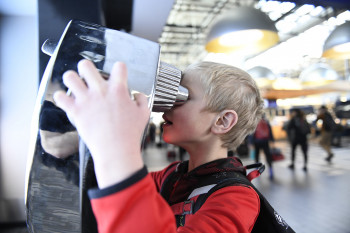 Even the VR experiential installation looked simple and natural. Instead of asking visitors to wear VR headsets, the agency took an iconic viewfinder (the kind you find at tourist sites with sweeping vistas), hacked it open and tricked it out on the inside to showcase 360-degree videos of Jackson Hole’s natural wonders. Viewers peering through the “VR-noculars” could visualize what they might see if they were standing atop a mountain, skiing at Snow King Resort or hiking in Grand Teton National Park.

The 360-degree virtual reality videos were produced by New Thought Digital, a Jackson Hole-based company whose videographers could quickly get to the chosen locations when shooting conditions were ideal.

To entice airport visitors to use the VR-noculars to get a closer look at the Jackson Hole experience, a 40x15-ft. backlit mural showcased stunning Jackson Hole scenery. Placed in a busy airport concourse in Minneapolis during Super Bowl week in February 2018, the VR installation generated more than 30 times the average engagement with OOH advertising. To view the Jackson Hole videos, visit https://www.collemcvoy.com/work/jackson-hole/jackson-hole-vr-noculars

The Fall Colors campaign for the Wisconsin Department of Tourism won a 2018 Silver OBIE Award in the Experiential, Travel & Tourism category. Created by Laughlin Constable, the integrated marketing campaign urged Chicago residents to view the breathtaking fall colors of Wisconsin before the trees were bare. 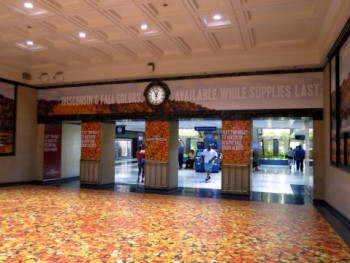 Station takeovers, such as this one in Chicago’s Union Station, provide an immersive experience for commuters. This experience for the Wisconsin Department of Tourism included floor graphics, window graphics, column and wall wraps and an 8-ft.-tall hourglass filled with leaves.

“Fall is the most beautiful time in Wisconsin, but it is also a condensed, unpredictable season,” explains Pat Laughlin, creative director Laughlin Constable. The campaign encouraged Chicagoans to plan a short getaway to Wisconsin during the five weeks of peak fall-color viewing. The messaging was delivered through TV spots, print ads, digital marketing, PR efforts and an experiential marketing installation in one of the highest-trafficked walkways in Chicago’s Union Station.

“The centerpiece of our campaign was the targeted effort to reach the 650,000+ weekly commuters in Chicago’s Union Station,” Laughlin says. “Here, we created a completely immersive fall-color experience featuring floor graphics, window graphics, column and wall wraps and an 8-ft.-tall hourglass filled with leaves.” The immersive experience couldn’t be ignored and was constantly changing.

Every 10 minutes, for five weeks, a batch of synthetic leaves dropped from the top of the hourglass to the bottom, providing a visual countdown-clock for prime fall color viewing. Window-film graphics on the upper half of the hourglass urged visitors to “See the fall leaves before the leaves fall” and directed them to visit the Fall Color Report on the TravelWisconsin website. The hourglass was created in partnership with Design Phase, a Waukegan, Ill.-based manufacturer of custom point-of-purchase displays and interactive kiosks.

The images for the window, wall and floor graphics were supplied by Laughlin Constable and retouched by the Hac Job creative imaging studio in the Milwaukee area. Printing and installation services were provided by Daxam Inc., a wide-format graphics company in Elgin, Ill. 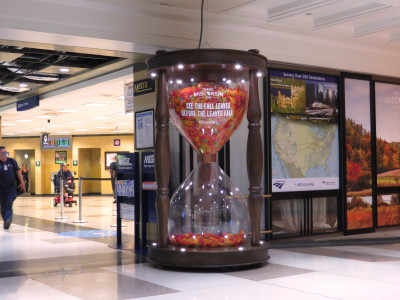 To encourage fall visitors to post images of the Wisconsin trees, Laughlin Constable commissioned the construction and placement of “Selfie Stands” at 10 Wisconsin State Parks. Each “Selfie Stand” featured a smartphone holder, so travelers could shoot selfies in front of the changing foliage. The signs were designed to be unobtrusive to the natural surroundings, yet still capture a visitor’s imagination. The Selfie Stands generated more than 50,000 impressions and received an average of 4,600 engagements per month.

The Fall Colors campaign resulted in a double-digit increase in traffic to Travel Wisconsin’s Fall Color Report and a significantly higher number of visits to Wisconsin during the fall-colors period.

“OOH is a critical component of our tourism media plans,” Laughlin says. “It is a wonderful medium for stopping people in their tracks to take notice of the message. And it lends itself to a high frequency of exposure, which is invaluable when reminding people to take action within a short window of opportunity.”

For more information about the campaign, visit: https://www.laughlin.com/work/travel-wisconsin

With the 2018 Feed Your Curious campaign for Tourism Tasmania, the oOH!media company in Australia and New Zealand demonstrated the effectiveness of integrating experiential marketing, TV and cinema advertising, online marketing and OOH advertising. 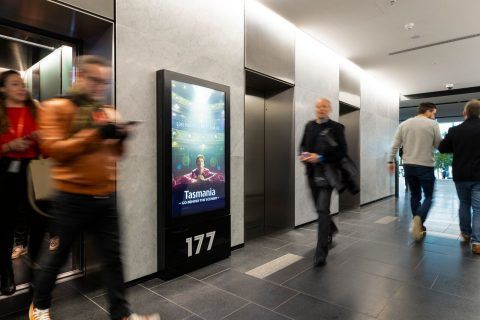 High-traffic spaces in office buildings can now display a series of videos or motion graphics on digital screens.

oOH!media is an innovative company that can post advertising and editorial messages at more than 20,000 sites in shopping malls, central business districts and along highways. For example, using oOH!media’s Upsider lifestyle content platform, advertisers can deliver ad messages and editorial content to a network of more than 4,000 digital screens in the lobbies, elevators and cafés of buildings in cities throughout Australia.

According to Adam Cadwallader, group director of Locate by oOh!, the firm’s investment in technology, content development, and data and analytics enable advertisers to reach the right audiences at the right time with the right message.

All elements of the Feed Your Curious campaign were designed to engage consumers, spark their curiosity and build an emotional connection.

“The creative story invites the curious to go on a journey of discovery around Tasmania, seeing stunning and surreal sights and encountering quirky characters,” Cadwallader says. “Once the audience was inspired, it was about driving action – in this case to visit Tasmania during the cooler months.” 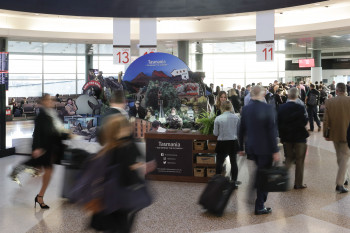 The experiential component of the campaign was an immersive, life-size Tasmania “pop-up story book.” It showcased Tasmania’s attractions such as the Museum of Old and New Art (MONA), spectacular scenery, oyster bars and gin distilleries and enabled passersby to get samples from storybook characters, such as the chocolate raspberry producer and gin distiller. As visitors explored the life-size cut-outs in the 2D layered display, they were encouraged to shoot and post selfies.

The collapsible, re-usable pop-up display was conceived and built by oOH!’s in-house creative and production team. It was installed in “high-dwell” environments, such as Qantas terminal in the Sydney airport, as well as popular shopping centers and eight major office towers in Sydney and Melbourne. 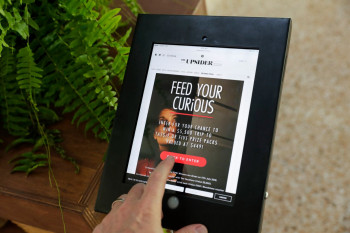 At some locations, oOH Media! deployed fully interactive EXCITE panels that featured multi-touch screens, a web-cam and gesture control and voice recognition technologies. For the Feed Your Curious campaign, the panels featured a digital map of Tasmania and came to life with sound and video when touched. Users were encouraged to register to win prizes.

“Out of Home has always been highly desirable advertising for the travel and tourism industry,” Cadwallader says. “Now it is even a more powerful medium, as it is backed by rich data and insights that allow brands to more accurately plan and measure campaigns.”

Eileen Fritsch is a Cincinnati-based freelance journalist who has covered the evolution of wide-format digital printing for more than 20 years. Contact her at eileen@eileenfritsch.com.

How Did COVID-19 Impact Catalogs?
END_OF_DOCUMENT_TOKEN_TO_BE_REPLACED