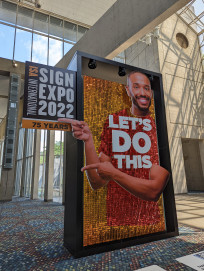 The ISA Sign Expo opened this week, May 4, with great success. The show floor on the first day of the event were promising, with some booths seeing attendees three or four deep, and across the board everyone was engaged. It was an exciting return to in-person trade events for the print industry, and while the square footage might be smaller than the pre-pandemic years, it still felt like a solid event.

One of the highlights was the launch of STS Inks' DTF - Direct-to-Film - bundle, with an exclusive printer designed for the purpose from Mutoh and only available through the STS bundle. The hardware is joined by software from SAi, as well as the ink and powder consumables from STS itself. The entire package has been designed to work together as a seamless whole, producing transfer film that can either be immediately applied to almost any fabric material, or even sold direct to consumer. Curt Fisher, VP Global Operation for STS Ink, noted that the final products cost around 50 cents - and can be sold for $4 or more. The system isn't designed to replace large-scale screen printing operations; rather, it is a system designed for the smaller runs and custom pieces, making it a great option for those looking to compliment their existing operations.

During a press conference, Vanguard Digital unveiled three new Flatbed UV LED Printers - the VK300D-HS, the VR6D-HS, and the VKH900-HS. The VK300D-HS is a part of the VK300D Series. It is a fully-featured printer with speeds up to 1.8 m per second and can produce up to 60 boards per hour. The VR6D-HS is a 4’x8’ flatbed that combines the latest Ricoh Gen 6 print head technology and high-speed magnetic drive with unparalleled speed, resolution, and quality. The VKH900-HS combines the VK300D-HS flatbed printer with the capabilities of the VKR3200-HS roll-to-roll printer. 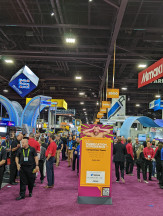 Roland DGA had a booth full of new products, many of which were released during the past two years of the pandemic. Of special note was the recently launched third-generation TrueVIS VG3 and SG3 wide-format printer/cutters. Building upon the capabilities of the VG2 and SG2 series, the new VG3 and SG3 models continue to benefit from core TrueVIS technology and functionality, plus new user-focused enhancements to features and industrial design. The TrueVIS VG3 Series offer high productivity, color control, efficiency, and convenience, while the SG3 models make the TrueVIS technology accessible to those who are just starting out.

Attendees also had the opportunity to check out the new VersaUV LEC2 S-Series UV flatbed printer, and new VersaUV LEC2 Series roll-to-roll UV printer/cutters. And for the crafter and maker markets — or those looking to start a home-based business, or for existing shops that want to expand by adding print-and-cut applications — the new VersaSTUDIO BN-20A desktop printer/cutter. The BN-20A delivers the same ease of use, print quality and versatility of the original BN-20, but by removing the recirculating specialty color channel for White and Metallic inks, Roland DGA is able to offer this value-packed “business in a box” for just $4,995 (MSRP).

The Show Must Go On