H&H Group: Finding a Niche and Running With It

At the H&H Group in Lancaster, Pennsylvania, ADA signage is more than just an afterthought — it has become a growing niche helping buildings and businesses transform spaces to not only make them more compliant, but also more beautiful.

Getting into ADA signage was originally just an extension of the fact that the company — which started out as a Sir Speedy in 1973, and went independent in 2019 — had added wide-format and signage to its roster of services.

“A company would be building a new place and doing their interior signage, and ADA signs were a big part of that,” says Nate Heisey, COO and partner at H&H Group. “Most went to Home Depot to get a standard black-and-white sign, but going with our niche of custom work, we were able to create ADA signage that matches an interior designer’s vision.”

Originally, Heisey notes that when the first requests for ADA signage alongside other interior graphics came from a customer, they didn’t have the equipment or expertise to produce them, so they started off outsourcing that part of the project. But eventually, a job came up that required them to reevaluate that model.

“One really eye-opening job was when we had a customer we had already gotten as a sign client, and they had a building already, complete with ADA signage. They put an addition on, and needed more ADA signs, and for whatever reason they came to us with one of the old ones and asked if we could match it. They needed 50 more, and they wanted them the same. We had to deconstruct it to make the same thing, and sending something like that out to a vendor was impractical. So it was an easy decision to get our own equipment and start dabbling.”

He notes that, at first, it was just a few pieces here and there, but as H&H got comfortable with it, they started actively pursuing the work, letting signage clients know they could also produce custom ADA signage.

Today, ADA signage is still just a small portion of the business — but it’s a growing segment, especially in the local area, where not many can produce these types of signs. Heisey notes that wide-format and signage in general makes up about 40% of the business today, and ADA signage is only 10% of that. “But it is growing rapidly, and just this year, while we might not double the business, we will be up at least 50%. In fact, we just invested in a second, larger machine to do [ADA signage].” 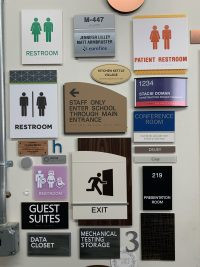 Because they produce them entirely in house, H&H Group can create custom pieces that fit perfectly into the décor of a building, and help complete a designer’s visio

While ADA signage started out as an unplanned addition to signage jobs, H&H now has a sales person who is dedicated to growing this part of the business. “We have a sales person who has really taken wayfinding and building-type customers and is actively pursuing them,” Heisey says. But at the same time, the company is also building a reputation for their work in this area, with “significant customers in the community” who the shop is handling all of their ADA signage needs, and in turn getting referrals. “Others are starting to call us to ask about ADA signage, so our name is starting to get out there for this type of work,” he notes. “What we are doing is higher-end and custom work as far as ADA goes.”

While shops certainly can print braille directly onto a substrate, H&H has gone all in, and invested in the additional equipment to do it via engraving, which, Heisey says, creates a “higher-end product.” They use two machines from Vision Engraving and Routing Systems, one smaller unit they started out with, and the new 2x8-in. they added to accommodate the growing segment. They also have a laser engraver that allows them to create straight lines and different effects. “It really depends on the sign, and the look they’re trying to achieve,” he says.

He also notes that because these are custom ADA signs, many of them are multilayered, with the shop printing custom artwork on the acrylic, with the ADA portion then mounted to the front. “It can turn out to be a fairly significant piece,” Heisey notes, “but we absolutely do the printing on the back to get a layered sign. Then it’s more than a sign — it’s functional ADA, but it’s also a custom sign in the building that is almost a decoration piece as well.”

That doesn’t mean, however, that branching out into a niche like ADA signage has been without challenges. Starting out, he notes, coming from the commercial print world — which is still 60% of the business — they had to learn signs in general, and then the nuances of ADA signs on top of that. First and foremost, Heisey says, there are a lot of regulations when it comes to this type of signage, including things like the fonts used and how the sign is made, and even the placement of the signage in the building during installation.

“We have to make sure the signs are not only made for the rooms that need it, but that they’re at the proper height, on the proper side of the door, etc. And a lot of that goes from making it, to installing it, to making sure they’re fully compliant. We do the installations too — for big jobs we’ll outsource some of it and get help, but even then we manage it. We have our own installers and do the vast majority of the work.”

Like with the signs themselves, H&H started out with outsourcing the installation process, but as business grew, they realized they needed to bring that in house as well. “It didn’t make sense to keep paying someone to do it, so we hired someone with experience, and then sent them for additional training. So now we’re able to do the majority of sign installations ourselves. We don’t have a bucket truck, so large external signage we’ll still sub out, but all the interior and lower signage we’ll do.”

The installation team, in fact, has grown to several dedicated installers now for the signage portion of the business, and Heisey notes that even he has been known to go out and help with installs on really big jobs that need all hands on deck to finish in the timeframes needed. “It’s easier to serve customers with our own people, and not worry about the presentation of a contractor we use. It also gives us more control and flexibility for our customers,” he says.

But in the end, ADA signage is proving to be a rewarding niche for H&H Group. “Seeing how something as unnoticeable as an ADA sign taken to the level of an interior design-type work, turning a very boring thing into an intricate sign in a building where it stands out as a focal point is huge,” Heisey says. “That is definitely the biggest reward, just seeing how far we can bring a lot of spaces, and turn a boring office space into a really custom design.”

In the end, he notes, “It’s a great challenge for our designers and production folks, being able to design and produce these really multi-faceted pieces with multiple layers and materials. It’s one thing to make one, but when you’re doing a building and need 100, it is rewarding to be able to make these signs. And it’s great for the employees — each sign is a little different. Being able to assemble and make these signs has been a pretty cool piece of our business, and everyone really enjoys making them.”