Go Behind the Curtain

But for every high-quality copy an attendee or exhibitor picked up, carried around, or brought home with them, there is a story to be told. The Show Daily was printed by local Dallas-based shop Nieman Printing, while the Experience Zone Guide was printed by Brodnax 21C Printers, also based in Dallas. And for both projects, additional obstacles had to be overcome to ensure the job was done before opening day began.

Eye of the Storm 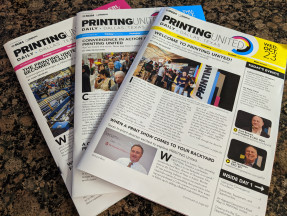 On October 20, just days before PRINTING United was set to open its doors for the first time, and right in the middle of the final push to get the Day One edition of the Show Daily printed, as well as the Experience Zone guide, a major storm moved through the city of Dallas. According to city documentation after the fact, more than 900 buildings sustained damage, with more than 100 homes and businesses completely destroyed when tornadoes touched down in two separate parts of the city.

The storm missed the Brodnax plant by about a mile, said Jim Singer, managing partner and 50% owner along with Mike Campbell. “We did have some power outage period and surges, but it came back up pretty quickly,” he said. “My house was destroyed, however. I was at home Sunday night, and the tornado directly hit my house and neighborhood. It was a total loss, but everyone was unharmed.”

Singer noted that stuff can be replaced, and the house can be rebuilt, he’s just thankful that everyone in his family, including his wife and two teenage children, were all safe. He plans to rebuild in the same location, and similar to what was there before, with an estimated 16-18 months before it will be ready for his family again.

Over at Nieman Printing, said COO Matt Nieman, things were both better, and worse. Where Brodnax didn’t have any issues with their plant beyond the initial power outages, at Nieman, while nothing was outright destroyed, there were a few more challenges to overcome.

“The pressmen working Sunday evening called and said they’re having a lot of water coming into the plant from the roof,” said Nieman. “There were three places where the AC units had blown over on the roof, which made quite a problem, and shortly after that we lost power.”

He noted that those pressmen then spent the rest of the night using the recycle bins usually used for their scrap paper to collect the leaking water. In total, he said, they ended up filling and emptying those bins around 10 times throughout the night, with the property manager in trying to do enough repair work to prevent any additional damage from a line of storms that were set to move through early Monday morning. “Sunday night into Monday morning was just about limiting the damage,” Nieman said. And the effort paid off, with the damage ending up being confined to mostly the roof.

That said, Nieman also lost power for several days, which caused additional challenges beyond the leaks. While the pressmen were fast enough to get the machines covered with tarps, and to keep water away from them so they sustained no damages to their press equipment, working equipment doesn’t do much good if it can’t be powered.

“That was a tough deal,” said Nieman. “Come Monday morning, we were calling to see when we could get power, and discovered that some places around the area were hit hard.” Originally, the power company estimated that service would be restored in hours, but that quickly turned in several days. “It got pretty exciting around here about how to get the jobs out,” said Nieman. Fortunately, none of the pre-printed or previously completed work was damaged, meaning at least they didn’t have to re-print any work on top of everything else.

In the end, Nieman reached out to partners and other local printers in the area, who were all more than happy to pitch in, lending their excess capacity to Nieman until the shop could get power again. “There were two days we had to outsource,” said Nieman — including the first two days of the PRINTING United Show Daily. “We were there doing the work, but we had two days of having to use equipment offsite. The third day we got power back just in time to do it ourselves and finish the job out.” 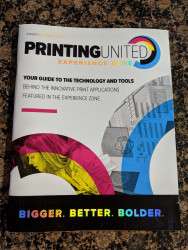 For both shops, and both projects, it wasn’t just getting the jobs completed that was a challenge. The storms didn’t just damage buildings, but created a 15-mile path across the city, making it difficult at times just to get around. A delivery that would have taken just a few minutes on Saturday, could take hours after the storms passed on Monday until the roads were clear again. “Moving around Dallas became difficult,” said Singer. “But printers are resilient. We’re survivors, and we bounce back.”

The community effort to pitch in and allow shops that would normally be competitors to come in and use their equipment to finish jobs, with the entire Dallas print community coming together in those few days after the skies cleared was a testament to how true that statement is.

PRINTING United was a celebration of all things print, with attendees from around the world converging on Dallas for the event. Print is and will remain an incredibly vibrant industry, and the above-and-beyond efforts these two local shops had to endure to ensure PRINTING United’s Show Daily and Experience Zone Guide were ready when the doors opened is the perfect illustration of that fighting spirit in action.

Mactac Gives Back to Local Communities

6 Ways to Create a Solid Business Plan for 2021