Exploring the Art and Science of Museum Graphics

For many, the idea of a museum conjures images rooted in the past: buckle-shoed men and corseted women stare back at us from paintings, mummies prolong their eternal rest, taxidermized animals in staid dioramas wait, ever-alert. In truth, museums have become dynamic places that have transcended collections based on wealth or plunder, offering instead interaction, analysis, and in some cases, multi-sensory experiences that help us understand the world we live in. 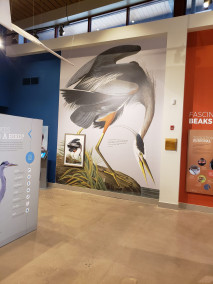 These large wall murals, produced by Berry & Homer, provide a visual punch in this display at the John James Audubon Center.

The tools used to create either permanent or temporary exhibitions in today’s museums are many of the same tools used in commercial sign and graphics shops. While the equipment and materials are familiar, the expectations and applications may be different. This article examines the museum graphics market, and includes input from two exhibit graphics professionals currently working within the cluster of museums under the umbrella of the Smithsonian Institution. It also provides input from a company that works to supply graphic elements that the museums’ in-house graphics shops are unable to produce.

Grace Lopez was in the Smithsonian American Art Museum (SAAM) frequently during the long, COVID-19 shutdown of Washington D.C.’s many museums. As Exhibit Graphics Designer at the museum — a position she’s held since 2007 — one of her roles was to perform routine maintenance on equipment in the in-house graphics shop. The museum, which houses works by American-born artists, or those who spent their careers mostly in the U.S., spans the American experience.

The output of the museum’s in-house shop focuses specifically on graphics for exhibitions, as well as signage for wayfinding and the museum’s public program. While a majority of the exhibit graphics are printed in-house, other applications such as floor graphics and elevator graphics are produced by Smithsonian Exhibits, a facility that feeds graphic and display elements to all the Smithsonian museums. Further, Smithsonian Institution Exhibits has capabilities such as flatbed inkjet printing that the smaller graphics shops have neither the space nor the throughput to justify.

“When I got to SAAM in 2007, we didn’t even have a vinyl cutter,” Lopez says, noting that introduction graphics — the paragraph or two that provides context for the work within an exhibit — were still being screen printed to the wall. In a successful effort to both modernize that step and access other graphics opportunities, she quickly added a Roland DG vinyl cutter to complement an existing wide-format inkjet device and laminator. As the shops’ capabilities expanded, an Epson printer was also installed. Lopez reports the shop does a lot of face-mounted graphics, consisting of self-adhesive vinyl mounted to Lexan or Sintra. 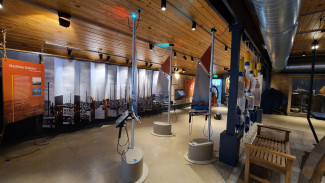 Berry & Homer produced this display for the Annapolis Maritime Museum that features wall murals and printed fabric elements that look like sails.

Regarding the durability of graphics produced for the museum, Lopez says SAAM’s requirements are minimal. Cut vinyl elements stay in place, she says, and wall labels for the museum’s permanent collection go unlaminated because they are rarely touched. This is in stark contrast to the National Zoo, where Lopez worked from 1993 to 2007. The graphics in that setting needed high durability due to sun, rain, snow, spilled soft drinks, and constant human contact. Lopez calls it “heavy use.” During her time at the National Zoo, many graphics migrated to fiberglass embedded signage, which offered needed durability.

While most of SAAM’s graphic applications are produced in-house, certain elements are produced by outside vendors. One particular example is large outdoor banners, which are often festooned between the columns of the museum’s stately entryway. Given the size of the print, the rigging needed, and considerations for a historic structure, this application is better handled by outside experts. The museum also contracts out for metal graphics and sidewalk case signs.

Asked about an exhibit that was challenging to produce and successfully done, Lopez mentions “¡Printing the Revolution! The Rise and Impact of Chicano Graphics, 1965 to Now,” which follows the history of printmaking among artists who came of age during the civil rights, labor, anti-war, feminist, and LGBTQ+ movements. A unique challenge related to this exhibit was that much of the production and installation was done during heavy COVID restrictions — a complicating factor.

As Chief, Exhibition Production, at the Smithsonian Institution’s National Museum of American History, Stephen Walczak has seen much change in the way exhibits are made. The museum, which Walczak describes as the largest history museum in the country, houses priceless artifacts from American history, along with multitudes of other items reflecting the country’s diverse culture. 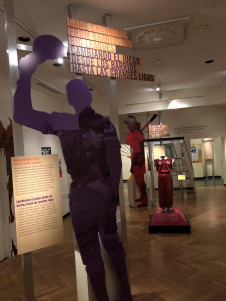 The museum’s graphics production shop is larger and more technologically diverse than that of SAAM, and the exhibit elements — more likely to be cases than walls — require different production steps. The shop, Walczak reports, has various models of Epson wide-format printers, as it produces a lot of face-mounted graphics. While most graphics are currently mounted to Sintra, he is seeing growing interest in wall-mounted graphics. Cut vinyl, using a cutter by Graphtec, is also widely used. In the last few years, the museum’s graphics shop acquired an SEG sewing machine, which allows it to produce front-lit silicone edge graphics.

Continuing with SEG, Walczak says he and his team are investigating backlit SEG applications as well. The shop also takes significant advantage of a CNC router, which has expanded production capabilities into new areas.

When Walczak started at the museum in 2003, the in-house shop was very different than it is today. Much of its output was screen printed. He, like Lopez, sought to access the benefits of digital printing — his first purchase was an Encad NovaJet (#oldschool). Walczak came to the museum from a graphics service provider, and he worked to bring the museum shop up to the turnaround times and quality standards of a commercial graphics shop. He brought in color management, measurement, and consistency; as well as new applications: wraps, concrete graphics, window films, and textured finishes.

One recent, challenging to produce, exhibit was the museum’s “Elephants and Us: Considering Extinction.” That exhibit, says Walczak, featured a lot of backlit graphics and unique exhibition furniture (the name for museum display cases and other structural elements). “It couldn’t have been done without the CNC router,” he says.

Though the shop has a great deal of capability, there are some elements that must come from outside — some from Smithsonian Exhibits, others, like large-outdoor banners, from commercial graphics providers.

Berry & Homer is a company focused on large-format graphic production and installation. According to Jared Selles, general manager of the company’s District of Columbia/Maryland location, its core clients are “corporations, stadiums, events, and lots of museums.” Museum-focused work comprises about 30% of the company’s annual revenue, and is concentrated on museums in both the Washington D.C., and Philadelphia areas. In D.C., this includes the National Museum of Natural History, Smithsonian American Art Museum, National Museum of the American Indian, the United States Holocaust Memorial Museum, and the National Children’s Museum. Philadelphia museums include the Museum of the American Revolution, the Franklin Institute, and the child-focused Please Touch Museum. For these museum clients and others, Berry & Homer offers a strong focus on quality, as well as a useful mix of printing and fabrication. 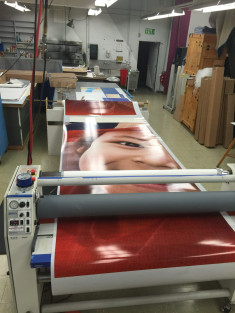 Many of the applications Berry & Homer produces for its museum clients are first- and second-surface applications to acrylic and MDF. Recently, the company has seen a lot of interest in direct printing on wood, which is sometimes acquired by the company, and other times supplied by the museum; and digitally-printed wallpaper, which offers a more elegant look than many wall graphics. Other common applications include wall murals, large-scale banners, and window films. Among the in-house museum shops Berry & Homer works with, says Joe Manley, account executive in its Philadelphia office, most have not really expanded their capabilities in the past several years.

As a supplier of printed graphics to museums, the company most commonly works with exhibit designers, and in-house production staff to a lesser degree. In the experience of both Selles and Manley, museum clients are often more particular than its more commercially-focused clients, and they always benefit from learning about new technologies, capabilities, and applications. For graphics producers looking toward museums as potential customers, Selles and Manley offer that producers must bring a high level of quality and consistency to the table, along with the ability to create a true, consultative partnership with the museum team. In so doing, they say, graphics producers can work with designers to get them as close to their wishes as possible, within the constraints of size, feasibility, and budget.

The inherent capabilities of digitally printed graphics are a perfect fit with museum graphics applications, which often require quantities of one, and which benefit from color, customization, and application flexibility. For those like Grace Lopez and Stephen Walczak, knowledge of trends and capabilities helps them push the possibilities for graphics in their institutions. For graphics providers like Berry & Homer, success in the museum segment requires a commitment to helping those who design and produce exhibitions achieve their unique visions.

Editorial: Hot Fun in the Summertime

How Did COVID-19 Impact Catalogs?
END_OF_DOCUMENT_TOKEN_TO_BE_REPLACED