While many companies in the graphics segment pride themselves on serving their communities — and they should be applauded for doing so — some operate on a slightly higher level: taking a role in building the community, serving as a center for jobs and training, and practicing environmental stewardship both locally and globally. Empire Screen Printing has had a profound benefit on its community of Onalaska, Wisconsin, a town located just north of La Crosse, Wisconsin. The company proudly identifies as a full-service producer for the OEM and POP markets, using screen, digital, and flexographic printing to produce or embellish a wide range of products. 2020 marked the company’s 60th year
in business.

Right Tool(s) for the Job(s)

According to Doug Billings, who served as the company’s VP of sales and marketing, and who served on its leadership team for almost 20 years, the production area at Empire Screen Printing features a wide variety of printing equipment, ranging from the screen printing presses that feature into the company’s name, to inkjet technologies including roll-to-roll and flatbed inkjet devices, a wet-toner system from HP Indigo, and a Fujifilm Graphium flexo/digital hybrid press. This array of equipment is supplemented by a great deal of diecutting, for which Empire manufactures its dies in-house. 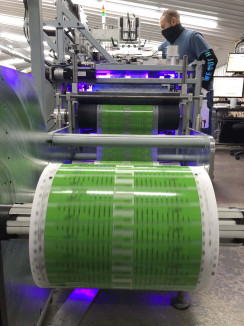 For Empire Screen Printing, the drive to find the equipment needed to do the job most effectively has led the company to innovate internally. According to John Freismuth, Empire’s president, the company has used the ability of its full-service machine shop to design and build printing equipment from scratch, or to redesign or retrofit existing equipment. The reason for this, says Freismuth, goes back to 1992, when the machine shop was founded as a way to access tools that were needed, but not available. In some cases, these tools, if used, would help Empire better achieve its lean manufacturing goals, which focused on cell manufacturing and production flow. One early innovation was a screen printing registration system which proved so useful it was also added to all the company’s screen presses.

Among the internal equipment development activities the company has undertaken is the integration of robots as a way to further automate its screen printing process; the building of a fleet of custom, three-color carousel screen presses; conversion of a six-color carousel press into a 12-color unit; and, currently, designing and building a roll-to-roll screen printing press. The roll-to-roll press, says Freismuth, will enable Empire to produce labels on material between 15 and 30 mils in thickness — a label-segment niche he sees as possessing significant opportunity. Further, the new roll-to-roll line requires two dedicated workers as opposed to the previous production approach, which required seven.

Among the innovative projects Freismuth has been most passionate about is moving the company’s UV curing to LED. While this type of curing technology is common in UV curable inkjet, it is thornier in screen printing, where ink opacity is high and ink laydown can be thick. At first, Freismuth was drawn to UV curables as a way to improve safety in the facility (by removing solvents), but also found significant reductions in electricity use. Since switching to UV-LED, the company has also gained access to certain substrates that could not by used under the hot mercury-vapor lights of traditional UV curing. While this broader move was spearheaded in safety and environmental performance, says Freismuth, the benefits can be measured on the bottom line. 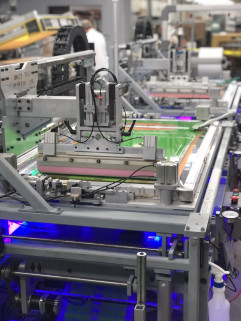 Empire Screen Printing has undertaken an extensive effort to convert its screen printing presses to LED UV and has reaped strong benefits from doing so.

In 2009, a successful effort by Empire Screen Printing to bring its sales team together for a meeting resulted in what has become a large, identity-defining event for the company. Since that first meeting, where Empire invited a couple of its vendors to set up informational tables, the meeting has scaled up into a regionally-focused trade show. Fast forward to 2021, and the result is Partners in Printing, an event that featured 75 vendor displays that focus on suppliers to the screen and functional/industrial printing segments, educational sessions, a celebrity golf tournament, and a concert — open to the community — that featured Grammy Award winning artists, and was attended my more than 1,000 attendees. The goal of the event, says Doug Billings, is to, “educate the community about what Empire Screen Printing is, and to let people know that we are a big employer doing nationally-focused work. It’s open to printers, suppliers, and the public.” Further, Billings says the company feels an obligation to protect the industry and keep printing strong. For Freismuth, Partners in Printing provided two great benefits. The first was to demonstrate the benefits of UV technology to the company’s competitors, the second was that because of these demonstrations, some competitors have become customers.

About Freismuth, who served as both his boss and his mentor, Billings speaks to his strengths. “John has a vision, and a passion for the industry. I came up with some crazy ideas, and John supported me and others in trying to do new things. Even if we failed, it was then about evaluating the results and taking the idea in a new direction.” In so doing, says Billings, Freismuth and Empire Screen Printing are now making a difference on a national level, bolstering connections both inside and outside the industry. Empire’s commitment to innovation, to partnerships, and to the advancement and general health of the printing industry, truly makes this company unique.  Asked what makes Empire Screen Printing great, Freismuth says, “We’re family owned, so making decisions is based on what we think, not just on the bottom line. We’ve invested a lot of money to make sure we’re doing things the right way. When we put our people first, the benefits are tremendous.”

How Did COVID-19 Impact Catalogs?
END_OF_DOCUMENT_TOKEN_TO_BE_REPLACED