The PRINTING United Inside Track
October 15, 2019

Next week the industry is uniting in Dallas for PRINTING United. Will you be there?

The day is almost upon us. Crates have been packed and sent. The Expo team is ready to board planes to Dallas to assist with set-up. This is the final blog post leading up to the inaugural PRINTING United show in Dallas, opening its doors on October 23.

After this, it’s time for the rest of the team to pack up and join the industry as it unites in Dallas at the Kay Bailey Hutchison Convention Center.

The feedback and sentiment we’ve received counting down to this event has been overwhelming. Thank you to all who are supporting this event, and who have helped build it to what it has become. This is just the first year, so we are extra excited for the years to come.

To get you even more pumped up for PRINTING United and its opening day, we wanted to share a few exciting events that will take place on Wednesday October 23.

Hear more about the inaugural year of PRINTING United from the show’s executive team, learn about SGIA’s acquisition of NAPCO Media, see the latest industry trends and research, and get a glimpse of what’s to come. RSVP for the event to SGIA’s VP of PR, Amanda Kliegl: 407-346-9800/akliegl@sgia.org.

At PRINTING United this year, one special guest in attendance is Joe Everson, an artist and performer known around the world for his talent at painting and singing. Celebrities, corporations, sports teams, and more are all counted among his client list — and now the attendees of PRINTING United will be among them as well.

Known as the Singing Painter, Everson creates works of art painted upside down — the subject not revealed until the end when he turns the canvas around — while singing a related song, such as a jingle or the national anthem, which is his most popular request. While he is usually booked for corporate events, or at large sporting venues, at PRINTING United, attendees will have the chance to see him in action.

Come to the show floor in the Hall C Lobby area — across from Ballroom C, where everyone will have the chance to see Everson produce one of his more famous combinations, painting his version of “Raising of the Flag on Iwo Jima” while singing the national anthem. 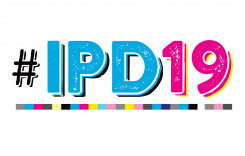 The 6th annual International Print Day (IPD) coincides with the opening day of PRINTING United. On this day each year, the global print community comes together on social media to network, exchange knowledge and information, and proclaim their love for print and the people that make it possible by following and sharing using the hashtag #IPD19.

The party starts at 6 p.m EDT in the United States on October 22nd (9 a.m. in AEDT in Australia / 11 a.m. NZDT in New Zealand on Oct 23rd) and finishes 24 hours later in the United States at 6 p.m. EDT on October 23rd. Print fans can support this year’s theme by also including the hashtag #Print2Gether, which celebrates partnerships within the industry and all the relationships from idea to execution that enhance the creativity, quality, and vitality of print.

Join us as we celebrate the kickoff of the greatest event in printing. Attendance at Gilley’s Dallas (yes, this is the place that was featured in the 1980 movie Urban Cowboy) is free with your PRINTING United badge, and includes drinks, finger food, live entertainment, and more. Come early and join the celebration!

Thanks for following along our weekly updates counting down to PRINTING United.

Reunited, and it Feels so Good