It’s no secret that a firm’s main objective is to cultivate an environment that not only creates a profit, but is built for growth.  Creating profit for a short period of time is one thing, but establishing yourself as a consistent profit leader in the industry is much more difficult.  Only a handful are able to reach this peak, but fortunately for everyone else, there are lessons to be learned and strategies that can be replicated.  There are quite a few ways to learn from these industry leaders, but perhaps the easiest and most accessible way is to benchmark against them.

Benchmarking is the process in which a firm takes a collection of quantitative metrics and compares theirs to others within the same industry in order to see how they stack up.  These comparisons can include financial ratios, measures of efficiency, customer satisfaction, and product quality, as well as many others.  From this comparison, the firm is then able to evaluate which portions of their operations are lagging or leading in regards to industry norms.  This gives them real data to support their decision making process.

Some argue that it is more important to focus on an innovative culture that ignores the norms and pushes new ideas to increase efficiency and growth.  While this is a valid opinion, it is important to observe history, especially in a mature industry.  In print, the best practices have been evolving for years across a diverse group of segments and there are plenty of lessons to be learned.  Benchmarking against industry leaders and the average companies provides invaluable insight and can set a struggling company on a new strategic path or even take an average firm to the next level of profitability.

When benchmarking, one of the first steps is to decide the scope of comparison.  Depending on the data available, firms can choose to benchmark against those in the industry with similar revenues, clientele, processes or even geographic location.  The narrower the breadth of comparison, the easier it is to find problem areas or strong points.

Why is Benchmarking Important?

The profit gap for industry challengers (bottom 25%), profit leaders (top 25%) and the average printer is millions of dollars which is obviously nothing to scoff at, so it is critical to understand ways in which the gap can be closed.  Figure 1 shows the range of profit rates for these three groups using data collected from those who have participated in PRINTING United Alliance’s Performance Ratios. 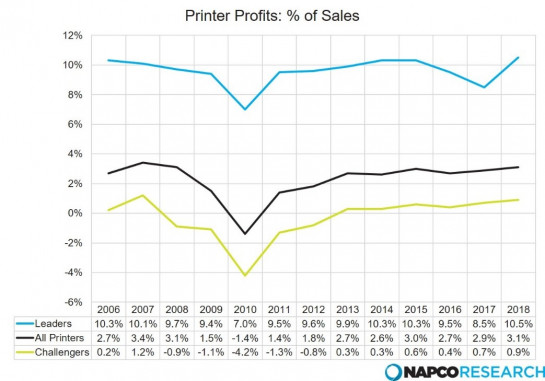 Using the Performance Ratios to Understand Past Recessions

An unprecedented economic environment has resulted from Covid-19.  Although all recessions are different, they are similar in nature at the core and we can still look back and learn lessons from how leaders persevered through them in the past.  Leaders’ profits obviously took a dip following the financial collapse in 2009 but profit rates near 7% were still lightyears above what the rest of the industry was seeing.  By understanding how different financial ratios reacted to the last economic downturn, we can anticipate what will happen this time around and learn to emulate the actions of profit leaders.

During a downturn, sharp declines in sales coupled with an uncertain future can wreak havoc on a firm’s balance sheet.  Having a strategy to become more liquid can prove to be very beneficial from a cash flow standpoint.  Looking back on past Performance Ratio data, we can see how all printers, leaders and challengers adjusted their asset allocations in order to push through the tough times.  We can also see what these balance sheets look like during expansionary periods.  Figure 2 shows the allocation of current and fixed assets for these different types of firms immediately following the onset of the Great Recession and years later when the economy was growing steadily. 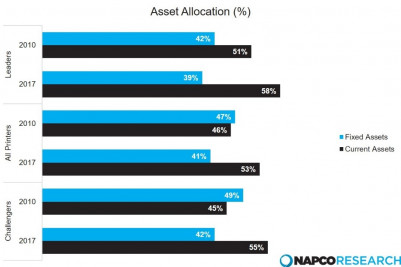 Above, figure 2 shows that the average printer was operating with a slightly lower percentage of current assets in the period immediately following the recession while the same goes for challengers during this time. One glance at profit leader allocations tell a completely different story.  They were operating with around 10% more current assets than fixed assets during the same period.  So why does this matter?  When comparing figures 1 and 2, the only instances of negative profit were associated with the period in which there was a greater share of fixed assets as compared to current.  In 2017, all types of firms were more liquid and were profitable which may shed some light on a potential strategy and actions that can be taken now to ease the effects of COVID-19.

With benchmarking, we can dive even deeper into the balance sheet to see why this may be the case. It is often said that ‘cash is king’ during economic downturns because firms want to be as liquid as possible in order to weather the storm and have flexibility.  Figure 3 shows cash as a percent of current assets for the two different periods. 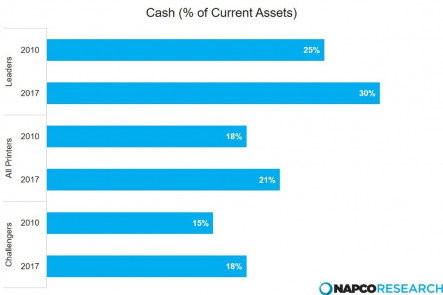 Once again, profit leaders showed their ability to stay liquid and this only improved over the course of the recovery period.  All printers and challengers were able to increase their share of cash, but not quite at the level of industry leaders.

The examples shown above are only a portion of the insight that can be gained from benchmarking against industry peers.  These metrics are also able to be used in good times instead of bad.  In fact, most companies tend to make major operational decisions and changes when they are flourishing.  PRINTING United Alliance’s Performance Ratios include more than 150 key performance indicators that can help to identify inefficiencies and highlight strong areas.  The program dives deeper into balance sheet metrics like the ones shown above but it doesn’t stop there.  There is a detailed report on operations as well as many financial, liquidity and employee ratios.  Visit www.performanceratios.com to see pricing details and to learn about all of the features that the program has to offer.  Please feel free to reach out to PRINTING United Alliance economist David Wilaj (dwilaj@printing.org) with any questions or to schedule a demo of the product.

How Did COVID-19 Impact Catalogs?
END_OF_DOCUMENT_TOKEN_TO_BE_REPLACED