After Drastic Falls, Print Production and Employment Level Out

When looking at certain economic and industry indicators, it is easy to see exactly when the COVID-19 pandemic began to debilitate business. Fortunately, industries were able to adjust and although we remain far from pre-pandemic levels, these same indicators have already shown plenty of recovery progress. 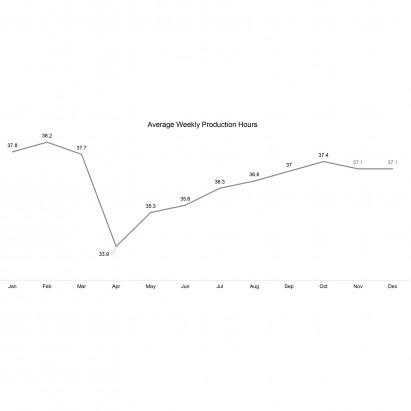 One example of recovery can be seen by looking at print production hours, which are tracked by the Bureau of Labor Statistics (BLS). In February, prior to the pandemic, the average print production employee was contributing nearly 38 hours of labor per week, which was around the average for the previous five years. While the number of production hours does rise and fall slightly on a monthly basis, it is a rare sight for the number to rise above 39 or drop below 37. It did just that after the onset of the COVID-19 pandemic as in just a month, average production hours dropped to 33.9 hours per week, the lowest level seen in at least the last 15 years. Soon after this dramatic drop, recovery began, and people were able to return to work at a consistent pace. This rise was driven by the availability of PPP loans, reduced shutdowns and printer foresight to pivot to producing both COVID-related and higher demanded products. Since April, the number of production hours improved until it took a slight dip as winter began and uncertainty continued to mount around election season and virus cases continued to rise. PPP funds have also run out for many firms, which could’ve also contributed to this slight drop-off.

Data collected in the COVID-19 Print Business Indicators Research mirrors the recovery of production hours as more printers have reported production increases in each iteration of the report since the research began in April. When average weekly production hours were at their low point, 87.0% of printers surveyed by PRINTING United Alliance and NAPCO Research indicated that their own production was falling. That number has consistently dropped in each iteration of the report as well, although it has dropped less drastically in the latest version, which is to be released in the next couple of weeks.

Although production hours have risen, it is important to understand that they have done so with less employees total in the industry. The graph below shows a similar, dramatic drop followed by a consistent recovery that leveled out in the latter months of the year, mostly driven by the same factors listed above. Overall, the industry has lost around 30,000 employees and it is still uncertain as to exactly how many will eventually return. It will likely take years if we were ever to return to pre-pandemic levels. 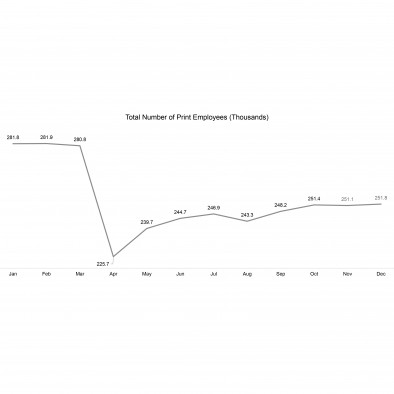 Data gathered from the COVID-19 Print Business Indicators Research also mirrored the movement of this BLS measurement. More than half of all firms (57.7%) reported that employment was decreasing in the early months of COVID-19 and since then, this number has continued to fall and those reporting increases has continued to rise, although not at monumental levels. The main focus point here is the number of firms reporting that employment has stayed the same.  This can clearly be seen in the graph above as employment has leveled off to a slower growth rate. This will likely continue as well until firms are fully able to reopen or are able to bring employees back with more PPP funds.

PPP Contributed to Recovery Before and Will Likely Do So Again

As mentioned earlier, Payroll Protection Program loans contributed to the resumption of production hours and the rise in employment throughout the spring and summer as many printers required these funds to keep employees on the production floor for a full work week. As loan funds withered away, so too did some of our production and employment growth. That is why another round of PPP funding is so integral and the funds so sought after. This time around, these loans can potentially aid printers until we are on the other side of this crisis.

So, how do we know that more PPP funding will help out businesses across the country? The answer is simple - because businesses are telling us that they need it. According to the Census Bureau, 33% of small business surveyed between January 4th and 10th said that they would need financial assistance or additional capital within the next six months. It appears that the print industry may need it even more as 55.0% of respondents to the COVID-19 Print Business Indicators Research said that they would take out another PPP loan when it became available, while another 26.6% were still unsure and could possibly try to get in on the next round of funding as well.

Luckily for small business, another round of funding became available on January 11, when more than $284 billion dollars became available through another round of the PPP. The application process should be much easier this time around and it is not anticipated that funds will run out quickly. Past respondents also indicated that they had much more success working with smaller, local banks rather than large financial institutions when trying to secure these loans. For more information on the program, visit SBA.gov.

This article includes information that will be released in the most recent COVID-19 Print Indicators Research.  Keep and eye out as the report (available for free to PRINTING United Alliance members) and an executive summary (free to all) will soon be available for download. This upcoming report is the fourth in a series by the PRINITNG United Alliance and NAPCO Research that has been studying the impact of COVID-19 on this industry since the pandemic struck in early spring. If you are interested in joining the panel to participate in this research in the future, please click here.

Read This Before You Invest in New Equipment

How Did COVID-19 Impact Catalogs?
END_OF_DOCUMENT_TOKEN_TO_BE_REPLACED