Since the earliest days of digital wide-format printing, technical graphics shops have seen the technology as a way to offer their products differently, though expanded use of color; and more efficiently, with systems that operate with a shorter process, at a lower cost. Since that time, the lines between technical graphics and other graphics production — signs, for instance — have blurred. The new HP Pagewide XL Pro printers, the XL Pro 5200 MFP and Pro 8200 MFP, have features that add clarity within that blur, awarding users with greater capability, exceptional ease of use, and top-shelf reliability at a low cost of operation.

According to Steve Newton, HP’s Pagewide Product Manager, Americas, the difference in the new Pagewide XL systems, when compared to previous iterations, is profound. Pagewide XL was introduced to the segment in 2015. At that time, HP was a new player in the reprographic/technical graphics space. Since then, Newton says, the HP technology has become the “go to” solution in the space by mixing the accuracy of technical printing with the image quality required for short-term signage. The systems, Newton says, fulfill the great desire for short run solutions in the architectural engineering space, and create a bridge between technical and marketing solutions. Addressing system productivity, Newton says the new Pagewide XL systems can produce up to 30 D-size (24”x34”) prints per minute. “Comparably,” he says, “there is nothing else on the market that comes close.”

One significant change brought by HP Pagewide XL technology is the move toward inkjet. “HP Large Format has always been an inkjet-centric company,” Newton says. “Prior to Pagewide XL, the technical space was dominated by toner.” At that time, he says, toner offered a significantly lower cost per print, but that has changed over time. Pagewide XL is a proven technology, he says, noting that because HP has eliminated previous obstacles to adoption: color quality, print cost, and productivity, from the technical space, the technology has moved to another level. 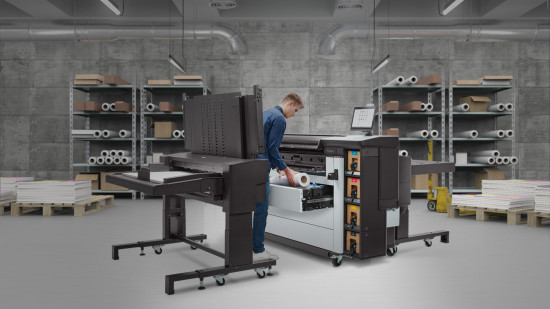 The new HP Pagewide XL Pro printers, the XL Pro 5200 MFP and Pro 8200 MFP, have features that add clarity within that blur, awarding users with greater capability, exceptional ease of use, and top-shelf reliability at a low cost of operation. | Credit: HP

Demonstrating HP’s commitment to technologies that promote sustainability, and to systems that run sustainably, Newton describes how plastics used in the systems are recycled and many components – system consumables – are either recyclable or reusable, such as three-liter eco-carton-based ink cartridges. The cartridges are made with more than 60% recycled materials, and with 80% less plastic than previous ink cartridges. With correct maintenance, he says, the Pagewide XL print systems, “will do millions of square feet of printing and remain fully functional. They are not built for obsolescence.” Part of this reality stems from Pagewide’s single-pass inkjet technology, which has almost no moving parts. “This helps make the systems extremely reliable,“ he says. Newton says the systems have proven to be exceptionally robust, and that there is no specific printhead life for the units.

In describing the Pagewide XL systems, Newton says one ongoing priority for HP has been to create a well-designed, common user interface that eliminates confusion between different HP printing systems. The advantage here, he says, is that “there is an easier transition and no additional learning curve – it all has the same interface.” This approach, he says, has also been integrated into software to ensure easy movement of files from workstation to printer. “Most people in the technical graphics space don’t come from print production,” Newton says, “so submission of prints must be as easy as possible.” Conversely, with HP SmartStream, a production software solution, the full production capabilities of the Pagewide XL systems can be used with dazzling, repeatable results. SmartStream is a production tool that helps users add key efficiencies to print jobs, including pre-flighting and color checking, and to save time by at least 50%. SmartStream serves as a valuable, unifying link between Pagewide XL and other HP wide-format systems.

Value on Many Levels

For reprographic and technical graphics shops, the use of Pagewide XL enables the capability to create production graphics – a secondary capability or revenue stream. For Pagewide XL users approaching the technology from the graphics side of the industry, the technology gives them the ability to expand opportunity and reach by cost-effectively accessing additional vertical markets. By effectively blurring the line between the technical and graphics spaces, HP Pagewide XL expands growth potential for all users. 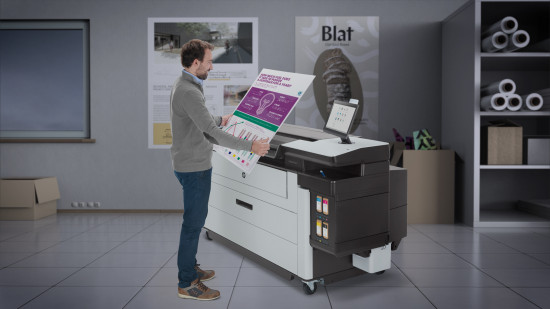 HP technology has become the “go to” solution in the space by mixing the accuracy of technical printing with the image quality required for short-term signage. | Credit: HP

Beyond the printing-related advantage of the HP Pagewide XL systems is a thoughtful approach to print finishing. For companies working in technical graphics, Newton says, folding can be a big part of the business. To address this often-essential finishing step, HP offers a folding system to work with the new Pagewide XL systems. Further, HP has worked with a third-party vendor, Fotoba, to create a cutting system that not only trims print edges, thus creating a print with full bleed, but also allows for routine and novel production cutting – a strong value-add. Also available for Pagewide XL, says Newton, is a take-up reel that enables roll-to-roll printing. Using this system, Pagewide XL printers are capable of producing prints up to 650 feet long. The ability for long-linear-length prints has opened opportunities for expansion into new product areas. For example, Newton says that some companies have used HP Pagewide XL to produce short-run custom gift-wrap (partially thanks to a special gift-wrap media product, produced by HP).

Newton is a firm believer that the need for reprographic shops to reinvent themselves has been ongoing, and that Pagewide XL is a strong tool for differentiation. “Some have predicted the end of technical printing in the last few years,” he says. “Every repro company I’ve looked at has moved toward graphic printing.” While the first generation of Pagewide XL systems allowed access into the poster and temporary signage space, he says, the new Pro 5200 MFP and Pro 8200 MFP systems raise the bar, making higher-quality, higher-durability applications possible. The new systems, he adds, can even handle rigid substrates (such as foamboard) up to 3/8” thick.

As a company, Newton says, “HP is constantly learning and feeding that knowledge back into research and development to create products driven by the end users.” In so doing, he says, HP has developed improved systems that not only expand the abilities of those serving the technical graphics space, but also provide the opportunity to offer a wider array of choices, enable differentiation, and foster greater profitability.

Learn more about HP Pagewide XL and how it can benefit your business, visit HP.com.

Masters of the Art