The Evolution of the Circular Economy, and Its Influence on Print

The modern sustainability movement has ebbed and flowed over the past several decades, beginning with a report titled “Our Common Future” — also known as the “Brundtland Report” — in 1987 by the UN’s World Commission for Environment and Development, chaired by former Norwegian Prime Minister Gro Harlem Brundtland. The report defined the principle of sustainable development as, “development that meets the needs of the present without compromising the ability of future generations to meet their own needs.”

In recent years, two events brought attention to sustainability in the printing industry. First, National Geographic launched a campaign to reduce waste from plastic products, such as single-use bags and straws, called "Planet or Plastics?" The National Geographic initiative included both an awareness campaign about plastics pollution, as well as investments in research programs and partnerships to address the issue.

The second action, and perhaps the one that had the greatest impact, is China’s implementation of its Blue Sky program that set strict regulations about scrap material imported into their country. To combat the overwhelming amount of waste that could not be recycled, China outright prohibited certain materials from being imported, and for those they were willing to accept, they set a very low contamination rate of 0.5%. The targeted materials for ban included plastics, scrap paper, certain metals, and textile materials. China continued to set bans around additional materials, and may completely ban all materials.

Push for a Circular Economy

The actions taken by China and other countries highlight the limitations of a linear economy, characterized by the take-make-dispose approach. This tends to consume finite resources to produce products which end up in landfills or incinerators. The result? The launch of a new model: the circular economy.

The circular approach, as envisioned by the Ellen Macarthur Foundation, entails gradually decoupling economic activity from the consumption of finite resources, and designing waste out of the system. The circular economy incorporates renewable energy, and is based on three principles: designing out waste and pollution, keeping products and materials in use, and regenerating natural systems.

The following offers a clear illustration of the differences in material flows between linear, reuse, and circular economic models. (Source: Government of the Netherlands, https://www.government.nl/topics/circular-economy/from-a-linear-to-a-circular-economy) 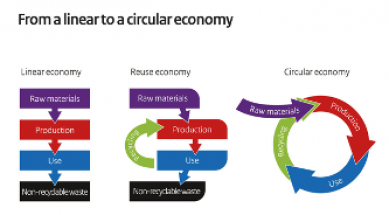 Achieving a circular economy is not an easy path to take, as it is difficult to fully eliminate waste. Some products, such as those made from renewable resources, are readily adapted to the circular economy model, while others are more challenging. Even though there are many practical barriers to establishing a closed-loop economy, changes toward closed-loop or circular economy operations are achievable within specific sectors, companies, or product categories.

For those facilities involved in packaging and labels, the sustainability and circular economy movement is real.  Companies, such as Wal-Mart, Target, and Unilever have adopted sustainability goals related to the reduction of packaging materials. The effect is hitting both the products being produced for customers, as well as the manufacturing operations. Another good example is several large hotel brands eliminating the use of individually packed toiletries such as shampoo, conditioner, etc. in guest rooms.

The pressure on brands to address the waste associated with their products has been growing, and will only continue to increase. Another, possibly most important, impact of China’s Blue Sky program is felt around the country as municipalities have stopped or suspended local recycling programs. With the approaches that many brands and other companies are taking to address these issues, those who are producing products, packaging, labels, and other supporting material need to understand they could have their business severely interrupted and threatened. Imagine the impact if your primary business was producing packaging or labels, and your number one customer decided to offer their products as “package free.”

The solid waste management problems being experienced by municipalities has gotten the attention of federal and state legislators. Approaches under consideration involve the imposition of mandates to use a specified amount of recycled materials in products, banning the use of certain products, and implementation of Extended Producer Responsibility (EPR) programs. EPR programs are designed to shift the waste management cost or physical collection partially or fully from local governments to producers by charging a fee or tax on products that will be used to subsidize their disposal.

The building of a circular economy is not going to be easy. There are many factors that need to be considered as the linear model will be difficult to transform. Nevertheless, the physical realities of the linear model have reached a tipping point as the world has, quite simply, run out of places to put the waste generated by a modern society. The key to expanding the circular economy is the engagement of consumers, business, academia, and government to provide the demand and proper incentives to find solutions. Landfilling waste is not a solution as it is just long-term storage, and more eloquent solutions are mandatory. This means printing operations need to become more cost efficient, incorporate renewable technologies and resources, partner with like-minded suppliers, and engage with emerging approaches to remain relevant and competitive.

Gary A. Jones is the director of environmental, health and safety (EHS) affairs at PRINTING United Alliance in Fairfax, VA. His primary responsibility is to monitor and analyze EHS regulatory activities at all domestic and some international government levels. He provides representation on behalf of the printing and specialty graphic imaging industry.  In doing so, Mr. Jones works closely with the federal and state-level Environmental Protection Agencies (EPA), Occupational Safety and Health Agency (OSHA), Department of Transportation (DOT), and other agencies.  He also provides membership assistance on EHS compliance and sustainability programs through a variety of approaches including responding to inquiries, presentations, writing, and consulting services.

He holds a BS in biology from LaRoche College and an MS in chemistry from the University of Pittsburgh.

How Did COVID-19 Impact Catalogs?
END_OF_DOCUMENT_TOKEN_TO_BE_REPLACED