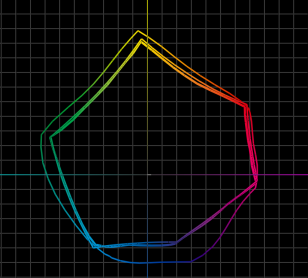 As UV ink chemistry has evolved, the color gamuts these inks can achieve have expanded greatly. | Credit: Roland DG

UV printers have come a long way from the days when they were strictly flatbed printers using very rigid inks. Back then, the rigidity of the ink was usually considered a bonus, not a detriment. The old mercury vapor lamps used to cure the UV ink generated a lot of heat, and were not conducive to printing on certain substrates like flexible films that would melt, so rigid substrates like Coroplast, Sintra, acrylic, wood, and some metals were the materials of choice.

Fast forward to today, and most devices are now using UV-LED lamps to cure their inks. LED lamps are more costly, however they last so much longer than mercury vapor lamps. Heat is not an issue, so the world of available substrates has widened dramatically.

Today you’ll see UV-LED being used not only in flatbed printing applications, but also in roll-to-roll devices such as Mimaki’s UCJV, which is a print-and-cut device with inks that meet the 3M MCS warranty standards. And they aren’t the only ones; EFI has a super stretch UV ink that is also 3M certified. Now UV inks are certified for five to seven years outdoors (with lamination). That’s a big difference from the early days of UV inks when a year or two outdoors was all you could expect.

It’s important when selecting a print device to work with the manufacturer to make sure you have it inked up with the UV ink type (rigid, semi-rigid, flexible, etc.) that matches the application you expect to produce. Many manufacturers will have multiple UV inks available for different applications.

When talking about ink types, it’s good to touch base on primers or adhesion promoters. In the past, these primers would be applied manually to the surface you were planning to print. The challenge you are trying to overcome with primers is surface energy, which is best expressed with a dyne level.

Take a waxed car: the wax brings the surface energy/tension of the car to a dyne level of 23 (low number) and rain-water has a surface energy/tension closer to a dyne level of 72 (high number). So, water beads up and just runs off a waxed car. UV inks have a surface tension in the 25-35 dyne range, which means the material being printing on should have a dyne level in the 35-45 range (that’s a good start). If the material doesn’t have that (and you can test by using a dyne pen), then you need to get it to that range by using a primer. Alternately, some plastics are corona treated to raise their surface energy.

As a quick side note, when a substrate has been corona treated, that treatment will degrade over time. Have a testing process in place for material that’s been corona-treated so you are not surprised by ink not adhering as you expect. Testing is critical when printing on new surfaces, and many manufacturers will have data sheets to let you know what surface will need what type of primer.

This is why you will notice that a number of flatbed manufacturers have reserved an ink channel for a primer or adhesion promoter. You can then set up the artwork to jet the primer while printing to save the time and effort of applying it manually.

Be mindful of one other challenge when printing on a substrate that will need finishing. There have been cases where ink will sometimes chip at the edge of a graphic that is being cut (either manually with a blade, or even with a flatbed cutter). Testing is critical to determine if primer is needed, or if it makes sense to cut the substrate first and then allow the print to bleed to the edge to avoid this chipping.

Another exciting development with UV inks and printers is the ability to create prints that have dimensionality to them. Because UV inks sit on the surface of the substrate, you have the ability to create topography with the inks. Some manufacturers have either developed software that works with their RIP – such as Canon’s Touchstone – or have a RIP that allows for properly prepared files to create this topographical effect (e.g., LogoJet and the Kothari RIP). You can now take a flat print of a painting and, with a little file manipulation, create brush strokes to make the painting jump off the page.

Roland UV printers have a palette of dimensional textures that can be added to artwork with the Roland DG Texture System Library. | Credit: Roland DG

Canon’s UVgel 460 inks arrived in 2019 with the Colorado 1650 printer. The user can select a flat matte or high gloss finish for any single print — and both can be used within the same image. The UVgel ink technology is unique in that the printhead and the UV-LED lamps operate independently from each other. Other manufacturers have a clear coat that can be inkjet printed as a layer either on top of other inks or as a standalone on the substrate to create a number of effects. Depending on how this ink is cured, the user can create a gloss or matte finish. Roland UV printers even have a palette of textures you can add to your artwork with their Roland DG Texture System Library. (See the figure on page 38 for just a few of the available textures.)

That leads me to another advancement in UV inks. When first introduced, most UV inks had a smaller gamut (range of color) than any of the eco-solvent printers. Because they were primarily used in flatbed printers and allowed the user to print on rigid materials, this wasn’t a big drawback at first.

As UV ink chemistry advanced, and as the type of substrates the ink was used to print on expanded, the gamuts for these devices have grown significantly. Now when you compare the gamut for some of these newer flexible inks to other devices, the difference is hardly noticeable. Check out the figure provided that shows three gamut maps. The largest of these is a Fujifilm Acuity 1600 LED printer and the two inside gamuts are the industry specification GRACol 2013 and an Inca Onset (notice how these two are just about the same).  UV inks are just as capable as other technologies at hitting industry targets.

The number of applications continues to grow with UV printers. Most of these new applications are in the flatbed printer category, and include items such as leather (e.g., wallets and belts), acrylic, glass (e.g., vases and artwork), ceramic tiles, promotional products, wood, metal (e.g., jewelry and giftware), and even bottles and cans (for some devices this requires a separate attachment to hold the bottle and rotate it as it is printed).

UV inks have come a long way in the past 10 years. It will be interesting to see new developments as they come about. These are definitely not your old UV inkjet printers.

Ray assists association members with information on digital printing as well as digital equipment, materials, and vendor referrals. He oversees training and certification workshops at PRINTING United Alliance. Ray is project manager for both the PDAA Certification program and the PRINTING United Alliance Digital Color Professional Certification program and is an instructor for the Color Management Boot Camps as well as a G7 expert. Ray regularly contributes to the Association's Journal and won the 2016 Swormstedt Award for Best in Class writing in the Digital Printing category. Ray was inducted into the Academy of Screen and Digital Printing Technologies (ASDPT) in 2020. He also works with SkillsUSA to conduct the National Competition for Graphics Imaging Sublimation. Outside of work, Ray enjoys biking, international cuisine and spending time with his three fantastic grandkids.

How Did COVID-19 Impact Catalogs?
END_OF_DOCUMENT_TOKEN_TO_BE_REPLACED