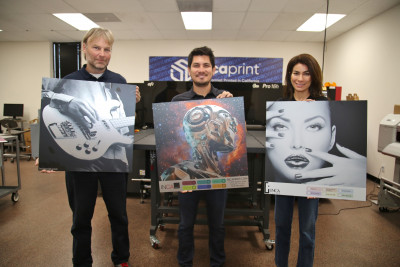 LOS ANGELES, Calif. — March 4, 2019 — Giovanni Ortega is not afraid of taking a big risk — it is something the California entrepreneur has done before in the real estate industry, the transportation market and more. But last year he took what may be his biggest plunge yet, jumping in with both feet to become a wide-format graphics printer. Ortega, who has no background in printing but plenty of motivation, invested in the EFI Pro 16h wide-format UV LED printer, and his newest business, Inca Print, was born.

Founded in 2017, Inca Print is a Los Angeles printing and design firm specializing in wide-format prints and cuts. With its state-of-the-art new equipment, the company can take care of nearly any project that any designer can think of, from high-resolution fine art to high volume production, on nearly any roll or rigid substrate, including acrylic, aluminum, metal, tile, wood, plastic, canvas and clings. Inca Print can also handle rushed jobs and 24-hour turnarounds for any signs and wall graphics, billboards/out-of-home signage, event graphics, large banners and much more. Inca Print’ capabilities also include full routing, assembled 3D graphics and very accurate cutting.

Ortega was in the transportation business when he gathered an interest in printing. His company had a contract with an offset print house to transport paper from paper mills to various subcontracted print vendors hired to produce political campaign materials. His work also involved delivering the printed materials to mail houses and post offices in California and other states.

Ortega spoke with his client — and now his mentor and dear friend — letting him know he wanted to get into the printing business. His client, the owner of the offset printing house, let Ortega know that if he wanted to get into print, digital was the way to go because many analog offset print companies have gone out of business after losing business to more nimble digital print competitors.

“But he also told me to do my research, which I did, and one thing I noticed is that in the digital world, wide-format was growing year after year,” Ortega says. “So, I chose that route to stand out from the competition. There are a lot of companies that can print roll-to-roll or print limited to size on rigid substrates, but they don’t have the white color capability and/or the rigid substrate capability of going wider and longer than most true flatbeds.”

Ortega knew his next step was to choose and purchase a printer, which required more homework. He started talking to other printers and spent a lot of time on Google. Initially, he looked at used machines that were one or two years old but decided their unknowns wouldn’t be worth it given how big an investment he was about to make.

“Buying used equipment would mean not knowing how the machine had been treated or how many hours of work it had output. I needed something that would be reliable and come with a warranty, especially as someone new to the industry,” he says, adding that he also wanted the latest technology.

Capabilities to Stand Out From the Competition

To see what was on the market, Ortega, who also considered a dedicated flatbed, attended a tradeshow and went to the Ricoh booth where EFI’s H1625 LED — one of the machines on Ortega’s wish list — and the Pro 16h wide-format printers were being shown.

“I started talking with the engineer who was running the demonstration, and the thing that sold me on the Pro 16h was the fact that it’s faster and had more capabilities than the H1625,” Ortega says. “I wanted to stand out from the crowd, so I had to go straight for it.”

As a newcomer, Ortega had his challenges getting started with the printer. Ricoh, Ortega says, was a tremendous help — especially given the fact that he initially ordered the machine from another vendor that had promised a 30-day delivery. When that vendor ultimately was unable to honor that commitment, he explained the situation to Ricoh, and “they handled it.” He also purchased a CNC cutter from the company.

Ortega and his printer operator had to learn — sometimes through trial and error — some of the basics about setting up files. It was one of the hardest parts about getting started as a newcomer, but before long Inca Print was able to master producing high-quality work on a broad range of media. Ortega put the quality he’s able to produce up against other print devices, and he has seen his company win competitive jobs that that he might not have been considered for were it not for the output quality he can now deliver.

The printer’s white ink capability, for example, has also been a strong competitive advantage and selling factor that has led to new jobs. “Clients have come to me because their other vendors couldn’t do what we do with white ink,” Ortega says.

The white ink also played a major role in Inca's landing a big project from a broker to produce Star Wars display graphics for Disney. The big win confirmed for Ortega that purchasing the Pro 16h had been the absolute right decision.

“I’ll be honest. When I got the job for Disney, it was very exciting because of the brand recognition. We did a lot of canvas pieces and a lot of stuff on acrylic and UltraBoard,” Ortega says. “And the files were pretty amazing — images of Luke Skywalker and Darth Vader from the first Star Wars movie release. I was really amazed by the final product, and we got permission to frame a couple of the canvas pieces in our office.”

Inca has also done some packaging work with its new CNC cutter, and, again, white ink was the key to printing the job — a display piece printed direct to board with white print under the color inks. In general, Ortega says, the quality Inca Print produces with the Pro 16h has been the key to several brokers sending work to a new, fairly unknown company. Recent jobs include new display pieces produced for Rotten Tomatoes and Fandango; in each case, the Pro 16h has been more than up to the task of meeting critical corporate colors on a range of different substrates.

Even though Inca Print has had some success with brokers, the printer is giving Ortega the opportunity to successfully sell his company’s print offerings on his own. For now, he’s honing his sales pitch as well as developing the company’s website and a catalog to provide a visual of Inca’s capabilities. Ortega and his designer also are testing what the machine can do to help them develop ideas for challenging projects they can pitch to prospective clients. 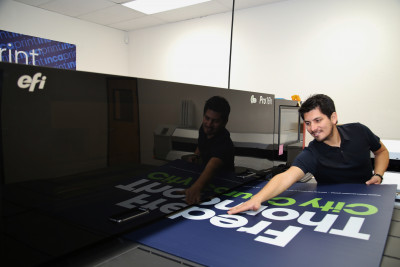 Ortega’s talking points to new prospects not only focus on selling the company but also educating them about the very broad range of applications possible with a high-quality LED hybrid device. Once a customer sends work to Inca Print, the company’s focus on customers and its commitment to execution with the Pro 16h makes even skeptical first-time clients true believers. “We try to over-deliver. Once we get a client, we want to keep them happy. When everyone else is saying a job will take 72 hours, we commit to 48 and try to deliver it in 24,” Ortega says.

Should sales keep growing based on his own direct sales activities in year two of the business, Ortega says he’ll definitely be in the market for a second EFI Pro 16h printer.