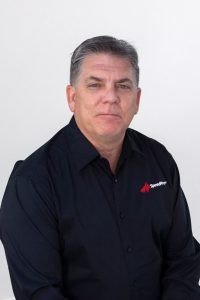 SpeedPro, a large-format printing franchisor with 122 locations in the U.S., announced the promotion of Paul Brewster to serve as President, as well as the promotion of Lori Morris to serve as CFO. They are joined in executive leadership of SpeedPro by franchising veteran and CEO and Chairman Larry Oberly, and VP of Marketing Danielle Yuthas.

In his new role, Brewster will expand his leadership to oversee all departments at SpeedPro. Previously, as the COO he was charged with franchise development, business consulting for franchise owners, sales, training and production. Accounting and marketing will now be added to his responsibilities.

Brewster joined SpeedPro in 2019 and continues to grow as an accomplished senior-level executive. Alongside Oberly, he coached the network through the Covid-19 pandemic and their impressive recovery, fueled by high network sales, with eight of the top 12 record-breaking sales months occurring in 2021.

“With his vast franchising experience and knowledge of the SpeedPro network, Brewster is poised to take SpeedPro to new heights in 2022 and beyond,” said Oberly.

Brewster’s experience includes 14 years of franchising, working with Clockwork Brands, Authority Brands and RE/MAX, and a total of 30 years of experience in operations where he started his career at Children’s Hospital Colorado followed by St. Anthony Health Foundation in Denver. He holds both a B.S., and an M.S. degree from Regis University, and a Franchise Management Certificate from Georgetown University. Paul also attained the Certified Franchise Executive (CFE) designation.

In Morris’ new role as CFO, she will expand her leadership to the overall financial health and growth of the SpeedPro franchise network and will continue to educate owners on financial management in order to achieve financial success.

Morris joined SpeedPro in 2020 as Vice President Controller. She helped SpeedPro with financials through the Covid-19 pandemic and also through their impressive recovery.

“Morris is a tremendous asset to the system, and she has helped the organization thrive since joining the Company,” said Oberly.

Prior to joining SpeedPro, Morris was a partner at Haynie and Company and has 35 years of experience in public accounting.

How Did COVID-19 Impact Catalogs?
END_OF_DOCUMENT_TOKEN_TO_BE_REPLACED