In December of 2010, Dave Higgins took a giant leap of faith when he purchased the Harrisburg, PA, SpeedPro franchise after years spent running a veterinarian distribution company.

Today, SpeedPro Harrisburg — which has five full-time employees, a couple of part-time workers, and some contractors — offers a vast range of services, including signage, vehicle wraps, graphics, displays, ad specialty items, and more. His customer base was initially made up of advertising agencies, architects, interior designers, and other print businesses, but has expanded to include a wide range of traditional commercial businesses across the nation.

The diverse customer base requires versatile print equipment. “You name it, we can pretty much do anything. And pretty much everything is printed on our EFI (Booth C8107) Pro 16h printers,” Higgins says. His company’s hybrid flatbed/roll-to-roll UV LED inkjet printers generate high-quality results on a wide range of applications.

The EFI Pro 16h prints flexible and rigid substrates up to 65" wide and 2" thick, with four colors plus standard white inks. It delivers resolutions up to 1,200 x 1,200 dpi. SpeedPro Harrisburg keeps throughput high thanks to the printer’s ability to deliver production-quality at speeds up to 311 sqft/hr. 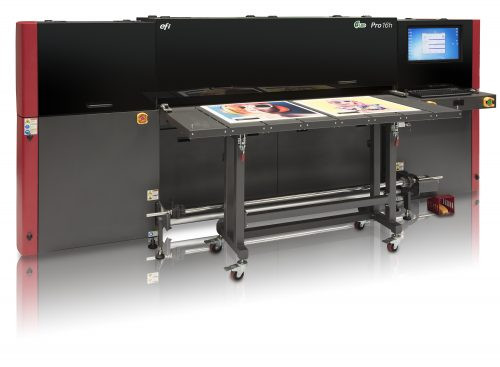 Higgins invested in his first Pro 16h printer a few years ago to supplement an older UV inkjet printer. The difference in quality and speed was both immediate and remarkable.

By using EFI - 3M ProGraphics UV inks, SpeedPro Harrisburg has become much more efficient in producing vehicle wraps as well — jobs the company previously produced on a slower roll-fed device. Having that capability, says Higgins, “has been a very big advantage for us.”

Higgins bought his second Pro 16h in 2021; print industry supplier Nazdar (Booth C6425) sold him both of his UV LED systems, and it is his trust in them that largely influenced Higgins’ decision to purchase it. Higgins considered many other manufacturers before deciding to stick with EFI — the other printers just didn’t have as strong an offering, particularly when it came to running costs. Plus, with redundancy on his production floor, SpeedPro Harrisburg can run jobs on both printers at the same time.

“EFI and Nazdar together are a win-win combo for me. I trust it and I understand it,” Higgins says. If something goes wrong, he notes, Robinson is on top of it and gets it fixed. “That’s what I was looking for,” Higgins says. “Again, it’s that partnership.”

The printer comes with a Fiery digital front end (DFE), which Higgins considers another advantage in terms of efficiency and cost. SpeedPro Harrisburg was forced to switch from the DFE it originally used when the company bought a UV printer. Understandably, Higgins really disliked the fact that he was not told about the need to purchase a new DFE — one that required costly updates — when adding the UV device. By contrast, having the Fiery DFE system included in the Pro 16h purchase has been the better option.

SpeedPro Harrisburg customers have been wowed by the speed with which their orders are produced.

“That’s what we’re known for: high quality and really good speed,” says Higgins. “We had a guy who called last night and said, ‘Hey, I need this job in the morning,’ and it’s been sitting here waiting for him to pick it up. So, we not only just met expectations, but exceeded them, that’s where we’ve shined.”

Higgins expects to see his business continue to grow and has certain targets that he wants to hit, including expanding into new markets. “I have a sales figure in my head of where I want to be in next two to three years,” he says, and that future may include another EFI printer. Higgins is considering adding a 126"-wide EFI Pro 30h UV LED hybrid and keeping one of his Pro 16h printers as a backup.