MELVILLE, N.Y. — August 24, 2017 — Canon U.S.A, a leader in digital imaging solutions, is proud to announce that four of its industry-leading large-format products received the Specialty Graphic Imaging Association’s (SGIA) Product of the Year Award — a coveted accolade from one of the industry’s most revered communities.

The Océ series printers won Product of the Year in the following categories:

More than 70 companies competed in the 2017 Product of the Year Awards, submitting 222 entries over the competition’s 49 categories — the largest field of competitors in the awards program’s history. All entries will be displayed in the Golden Image Gallery at the 2017 SGIA Expo (New Orleans, October 10–12). Ray Weiss, SGIA’s Digital Imaging Specialist, coordinated the yearly awards program and said competition was tight.

“The judges struggled to choose winners in the output device categories, because the print quality was so good and so close from entry to entry. That’s great news for the printing industry,” said Weiss. “Canon’s awards were each well earned.”

Sustained Excellence
The Océ Arizona series UV flatbed printers have been consistently honored by the SGIA organization. This year’s honors mark the eleventh year in a row that an Océ Arizona Series printer has been honored since the internationally recognized product line began shipping in 2007. The dynamic product line has now received over 50 industry awards, including 19 SGIA

Product of the Year recognitions. All Océ Arizona series UV flatbed printers share the same award-winning image quality and robust architecture, offering Canon values of quality, reliability, productivity, and user-friendliness. As further proof of its sustained success, earlier this year marked the 6,000th sale of an Océ Arizona Series printer, which now has a truly global footprint helping customers in almost 70 countries on six continents. In only a decade, the Océ Arizona Series of flatbed printers has been adopted by more customers than any other flatbed series, from any other manufacturer.

“Any recognition from SGIA is impactful to our business, but on the tenth anniversary of the Océ Arizona Series, this year’s award feels more important than ever, as once again our flagship product line is recognized by an industry community that understands trends and technology as good as any,” said Toyotsugu Kuwamura, executive vice president and general manager, Business Imaging Solutions Group, Canon U.S.A., Inc., and president and CEO, Canon Solutions America, Inc. “It goes without saying that we are honored to be amongst a group of industry leaders that continue to push the realm of what is possible in the large format printing arena.”

New to the Market. Here to Stay.
Equally significant to this year’s announcement is recognition of first-time SGIA award recipients: The Océ Colorado 1640 and both the Océ Arizona 6160 XTS with High Flow Vacuum and Océ Arizona 6170 XTS with High Flow Vacuum capabilities. Already receiving a PRINT 17 Must See 'Ems Award, the Océ Colorado 1640 Printer, the world’s fastest 64” roll-to-roll printer, was designed to transform sign and display printing with its ability to deliver breakthrough productivity with high-quality output for both indoor and outdoor applications. With the radically new Canon UVgel curable ink that gels instantly on contact with the media, resulting in precise dot placement and area control for consistent high-quality images at high speed, the Océ Colorado 1640 is set to redefine the possibilities and business opportunities associated with large format graphics printing. 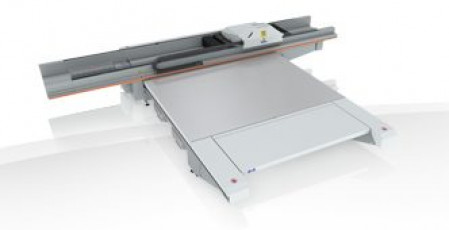 Announced in May of this year, Canon introduced new media handling capabilities for both the six color Océ Arizona 6160 XTS and seven color Océ Arizona 6170 models. The new High Flow Vacuum configuration is an extension of the award-winning printing capacity of the Océ Arizona models, and helps enable users to produce corrugated packaging and temporary POP applications traditionally served by screen printing or lithographic lamination. Using a new Océ-patented airflow management system, this enables plywood, MDF, and other fiberboard and wood printing applications that would otherwise require mechanical constraint of the media to handle effectively.

“It is great to see our newest technologies earning accolades and helping both new and existing customers expand their offerings,” added Kuwamura. “We are committed to advancing our technology with the advancement of the industry, as proven by this year’s SGIA recognition.”

The coveted Product of the Year jewel awards will be presented in a special ceremony Monday, October 9, in conjunction with the 2017 SGIA Expo, and exhibitors will be able to display them in their booths. To see the award-winning products in action, visit Canon Solutions America, a wholly owned subsidiary of Canon U.S.A., Inc., at booth # 2525.

†Based on weekly patent counts issued by United States Patent and Trademark Office.

How Did COVID-19 Impact Catalogs?
END_OF_DOCUMENT_TOKEN_TO_BE_REPLACED