Productivity Up Over 30% with SpencerMetrics CONNECT

The SpencerMetrics (Booth 9351) CONNECT system was installed in a busy pressroom, running two to three shifts depending on demand.

Production data was being manually gathered to estimate a few key performance metrics. Manual data collection was time consuming, requiring multiple steps by multiple people, and was subject to human error. And by the time the data was analyzed and metrics available, much of it was operationally obsolete, and limited analytics did not identify root causes.

Manual estimates of task durations are typically far from reality, and in the rush to maintain production targets, some may not be recorded at all. Ultimately, press uptime may not even match with operational downtime.

In this shop, the CONNECT system was installed on a half-dozen color digital cut-sheet presses. CONNECT’s large, real-time shopfloor dashboard display enabled the production staff to see the progress of each press at a glance. Each operator could monitor their performance throughout each shift, and could see their progress toward hitting production targets. Management used CONNECT’s up-to-the-minute analytics to identify opportunities to improve productivity by reducing the unnecessary downtime on each press. With email alerts, management was also kept abreast of press issues, assisting in the timely reconciliation of any problems. 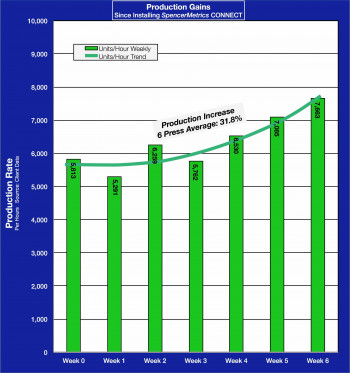 Real-time analytics for each press helped monitor progress and confirm that actions were achieving their desired results. In some cases, improvements depended upon workflow changes; in other cases, operator training was needed; in still others, enhanced operator engagement boosted bottom line results.

Over the following six weeks, management was able to identify best practices, and further find the root causes of excessive downtime.

During the first six weeks’ use of CONNECT, management increased the average press production rate from 5,813 units to 7,663 units an hour — a 31.8% production gain.

As previously noted: a shop running two shifts a day, 5.5 days a week, could eliminate 2.5 shifts a week and still maintain the original production rate. Or, if additional production could be sold at 2 cents profit, monthly profit would increase $14,000 per press.

Streamline Your Business with the Right ERP System

The Outlook for Print in 2021
END_OF_DOCUMENT_TOKEN_TO_BE_REPLACED