Printing Goes Into the Deep at Monterey Bay Aquarium Exhibit

Wide-format printing has helped bring this exhibit to life at the Monterey Bay Aquarium.

Into the Deep, which opened this April at the Monterey Bay Aquarium, is one of the most ambitious exhibitions undertaken at the facility. Five years in the making, the show brings together research from the Aquarium’s partner institution, the Monterey Bay Aquarium Research Institute (MBARI), situated alongside Monterey Canyon, one of the deepest undersea canyons on the West Coast. Researchers study creatures and habitats in the largest living space on earth.

Deep sea creatures live in extremes of pressure, temperature, and lack of light and oxygen. Displaying animals under these conditions requires innovation to bring them to visitors, and the signage to go with it was no exception. For this exhibition, all of the signage is primarily backlit, as the graphics need to be dark enough not to compete with live animal experiences, and vibrant and eye-catching to interpret these seldom-seen creatures.

Capturing the Magic in Print

In-house graphic production is one of the things that sets Monterey Bay Aquarium apart as one of the nation’s finest aquariums. The ability to produce graphics in-house allows for quick updates, repair of damaged graphics, and consistency for optimal visitor experience. The Exhibit Production team operates a variety of wide-format printers, CNC routers, and laser cutters for producing signage and interactive elements.

The team operates a range of Epson eco-solvent, aqueous photo, and HP latex printers. Most graphics are printed and laminated second-surface under acrylic or polycarbonate Lexan. For Into the Deep, the team purchased an Epson S80 eco-solvent printer, with white and silver ink capabilities. It offered a richer color gamut than the older 4-color Epson S30. IT Supplies provided on-site color management service with the sale of the printer. 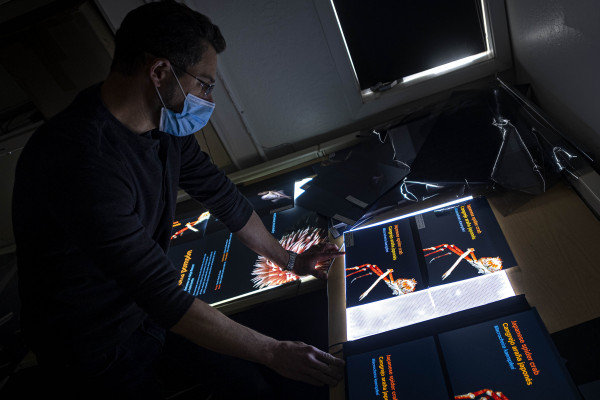 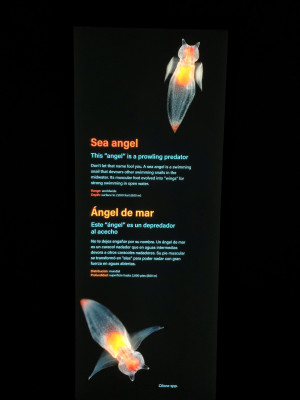 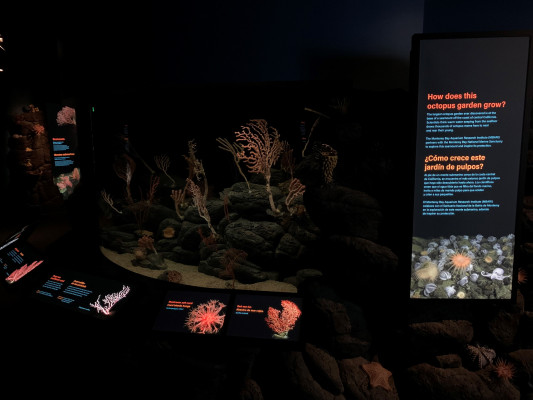 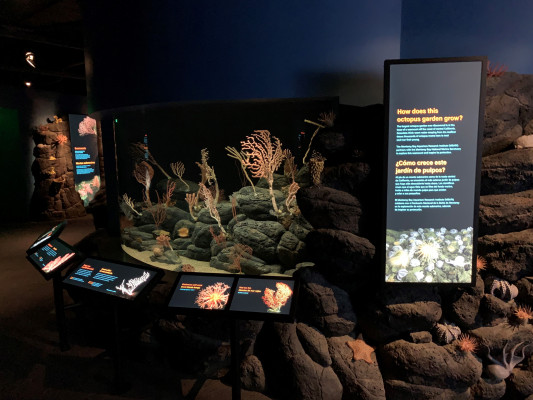 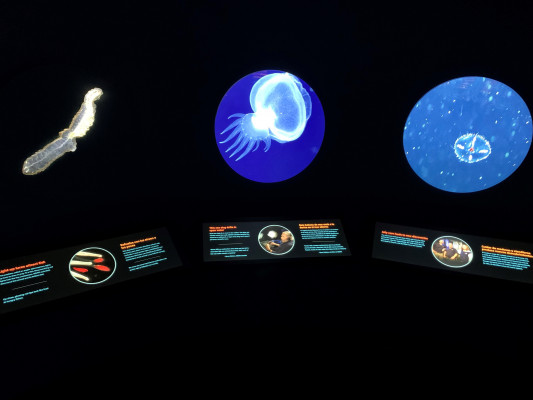 Prior to this exhibition, to produce backlit prints with rich color density, the graphics team relied on laminating multiple prints together in tight registration. The process was time consuming and not always accurate. The white ink capabilities of the S80 printer, however, allowed the team to achieve the desired color density in a single print.

For the backlit graphics, a white ink spot channel was created in Photoshop. This increased color density in the dark backgrounds, while maintaining balanced colors in text and photos. Files were sent to the printer via Onyx Thrive RIP, with 100% white ink backgrounds and 50% white ink in the text and photo spot channels. Prints were slowed between passes, to allow the dense ink to cure on the backlit film. The film itself was the Briteline Backlit Film from Grimco. After drying, the prints were laminated with polycarbonate Lexan.

Custom light panels for the exhibition were fabricated by LED Creations, produced in Korea, and sent via air freight to avoid shipping delays. Light intensity was controlled using in-line dimmers, bringing down light levels so they wouldn’t interfere with the sensitive animals.

In the end, the graphics provided the desired vibrancy and color density. The in-plant operation at the aquarium ultimately produced hundreds of backlit graphics for the show, helping to capture the unique environments these animals are usually found in, and helping to not only educate the public about them, but spark imagination and wonder in every individual, young and old, who visits.

Jonathan Wolf is the senior graphic production specialist at the Monterey Bay Aquarium.

Be Sure to Take a #LookAtRicoh at PRINTING United