Preston Jordan: Growing Up with Print 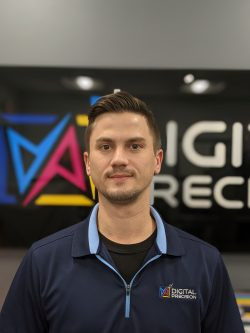 Preston Jordan, 34, will say he fell into printing, but he has been in the graphics industry his entire life. Growing up, his dad was a silk screener, and he even joked that as a kid he’d use lacquer thinner as a hand soap.

Now, Jordan is the owner and president of an award-winning wrap installation business that specializes in architectural graphics, custom signage and décor, and car wraps for commercial vehicles.

Jordan didn’t become the owner of his own business overnight. His career in printing first began about 10 years ago when he found himself working at a print shop. “I sort of fell into it, I was working at this shop where I was working the night shift, and I was the monkey pressing control P all night. I wasn’t really doing anything special,” Jordan says.

From there, Jordan worked his way up and began working at Miller Decals, where he learned the ropes of vehicle wrapping and eventually ventured out on his own doing high-end car wraps for a period of time. While he was doing that, Jordan also spent time as a contract installer for other printing companies throughout Georgia and the southeast. “I got to see a lot of back-end operation, but I got tired of the labor-only side of things, and I wanted to get into my own production,” Jordan says.

So, in 2018, Jordan bought his first printer and Digital Precision has been growing ever since — but not without a few growing pains. Jordan says that the journey of business ownership is not what everyone expects, no matter how well someone thinks they’re prepared for it. Even with a decade of experience in printing and installation, he admits that his biggest struggle with business ownership is trying to prioritize his craft over the business side of things.

“I got too caught up in the perfection of car wrapping, and absorbed just an absurd amount of hours that weren’t necessary, going above and beyond what the client would even recognize because I was too involved with the craft and wasn’t prioritizing the business,” he notes.

Jordan says that since first starting out on his own, getting more involved in the production and not the actual wrapping allowed him to set more time aside for the business itself — and he’s gone from just one printer to now owning four.

The COVID-19 pandemic was also a challenge for Jordan. Just as his production was starting to scale up for corporate entities doing murals, window graphics, privacy films, and directional signage, the pandemic hit and companies were no longer paying for those services. While it seemed things were doomed at first, this ended up being beneficial, because he could hone in on building better business relationships with larger companies.

“Honestly, it’s the best thing that ever happened to my business,” says Jordan. “You know these large companies, they’re not Googling for our services, it’s all networking and long-established relationships that are really hard to penetrate. And so now, with COVID, there’s been so many changes in personnel, we got new people with purchasing power and new relationships to be formed. And we’ve been able to really navigate that and be ready for when they did start spending money again. And now we’re booked into January.”

Looking ahead, Jordan isn’t exactly sure what the next few years will bring, or if he’ll even still be in the printing industry, remarking that he’s not sure if it is quite his endgame, but he does have a “the sky is the limit” mentality. Jordan says he doesn’t have a cap on where he wants the company to go, he just wants to keep moving forward and growing.

“I want to add marketing brand management — we work with a lot of brand management companies and design firms right now, and eventually I want to be able to just cut out the middleman and do everything in-house,” Jordan says.

Looking Toward a Greener Future

As much as he enjoys the industry, there is one thing Jordan wants to change: the lack of sustainability in the printing industry.

“I think we’re still kind of flying under the radar as far as how non-green this industry is, I understand certain companies and manufacturers are starting to take that step but it’s not quite there yet,” he says. “If I could wave a magic wand, it would be that because you know, going back a decade now, all these construction firms and the big corporations of the world, they all have these mandates where they have to meet a certain amount of green sustainability within their operation, and they just haven’t. I think it’s a ticking time bomb.”

How Did COVID-19 Impact Catalogs?
END_OF_DOCUMENT_TOKEN_TO_BE_REPLACED