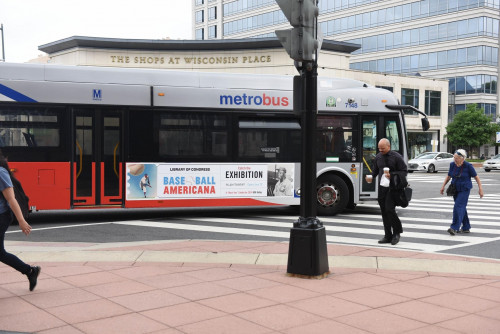 Live in Washington, D.C. between June 25 and July 23, 2018, the transit campaign capitalized on 'baseball fever' around all-star week and beyond. Comprised of 20 bus wraps and five bikeshare stations, the campaign catered to a variety of audiences including All-Star game visitors, baseball fans, kids and families, athletes, tourists and others, with the goal of driving visitors to the exhibition and its related programming throughout the year.

"In opening Baseball Americana during All-Star week, the Library wanted the exhibition to be visible throughout the city, so as many people as possible were aware of this unique opportunity," said Gayle Osterberg, Director of Communications at the Library of Congress. "The mobility of the campaign with OUTFRONT helped us achieve that, with 40,000 visitors attending during its opening two weeks."

Agfa and TFL Join for Inkjet Project for Leather