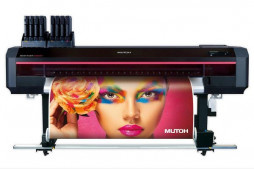 The new dual-staggered AccuFine HD printheads have the power to print up to 89% faster than the current model. Optimized by MUTOH's very own i-screen technology, print with even more confidence knowing that every print job will be smoother than before. The XPJ-1682SR Pro is powered by MUTOH’s Award-Winning VerteLith Genuine RIP Software, bundled with FlexiDESIGNER MUTOH Edition 21, a $2,199 value, for the ultimate balance of speed and quality.

Other key features of the XpertJet 1682SR Pro:

These new enhancements make the XpertJet 1682SR Pro one of the most impressive printers of its class. This Eco-Solvent printer also utilizes a new set of print effects known as i-screen, created from MUTOH’s Intelligent Interweave printing technology. The i-screen print technology optimizes the AccuFine HD, greatly reducing banding for smoother print images. MUTOH has also updated the front dryer system to a flat design improving ink drying times by up to 20%.

“The XpertJet 1682SR Pro builds upon the newly developed technologies featured in the XpertJet 1641SR Pro and cranks things up a notch,” says Tony Simmering, MUTOH product manager. “The introduction of dual-staggered MUTOH AccuFine HD printheads bring revolutionary speeds incomparable to anything else on the market.”