Making Direct-to-Garment Printing Work for You 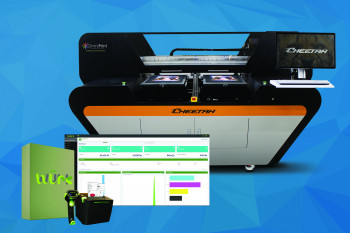 OmniPrint International Inc (Booth 2210) is showcasing its multiple award-winning direct-to-garment (DTG) printers in its booth at PRINTING United 2019. This family-owned and operated private DTG tech company has been taking the industry by storm since 2004 with its cutting-edge printers. The buzz and growth has earned them a spot in the INC5000 Fastest Growing Companies in America 2018 and 2019.

The FreeJet 330TX Plus DTG printer is OmniPrint’s flagship product, which has won SGIA’s “Product of the Year - DTG Printers” title for four years in a row from 2016 to 2019 for its achievements in high quality printing not only on cotton and blends, but also on 100% dark polyester as well; a feat which all other DTG printers continue to struggle with to this day. This printer is powered by GamutPlus inks and pretreatments, which enable the ability to print on a wider variety of garments with incredible vibrancy.

Following the tremendous success of the FreeJet 330TX Series, OmniPrint International noticed the absence of the FreeJet’s print quality and simplicity in the industrial DTG printing industry, so the company premiered the Cheetah Industrial DTG printer, its first industrial unit. “We wanted to bring the same ease of use, award-winning quality, and low production costs into the industrial sector of the printing business for the fulfillment centers of the world; something that was long overdue for us at OmniPrint,” says Victor Pena, OmniPrint’s founder & CEO.

The new Cheetah Industrial DTG printer showcases true one-pass printing technology. Traditionally, a DTG print on dark garments requires two passes (one for a white underbase and one for color/highlights). The Cheetah’s printheads have been engineered to work together in printing both a white underbase and a color/highlight layer simultaneously, contributing to the breakneck printing speeds never before seen in an industrial DTG printer. Average print times on the Cheetah will be 30 seconds for a dark garment print, and under 10 seconds for a white/light garment print — a huge improvement on what used to take three to five minutes.

Both the FreeJet 330TX Series and the Cheetah Industrial DTG printers are optimized for OmniPrint’s Würk software. Würk is the first-ever print business management software that manages print production with a simple barcode that automates the entire order process, winning the award for SGIA’s “Product of the Year - Software, Automation” for 2018 and 2019. This software helps print business owners get a cohesive overview of their operations, while simplifying the order process with a front-end website where customers can choose their own garments, upload their designs, and set up the positioning/size/margins themselves. Once the order is placed, a barcode is generated for the user to scan and automate the printing process, increasing both production and revenue while giving the ideal overview of your printing business in one interface.

“We really want everyone to come to our booth and see these incredible technologies that we’re offering for themselves, including an exclusive demonstration of a complete automation DTG print setup for the Würk software,” says Pena.

Don’t miss out on the exclusive new Würk automation demo in addition to the award-winning FreeJet and Cheetah DTG printers at OmniPrint International’s booth.