Sculpted to resemble the massive and heavy structural steel girders used to construct skyscrapers, the I-beam  mobiles of J F Jones instead are designed to float near weightlessly above the viewer and to produce a smile with 3-D characters casually perched atop the beams.

Reminiscent of old Warner Bros.’ sleep-walking cartoon characters, one of Jones’ modern-day characters is distracted by his cell phone and appears to be perilously close to walking off an I-beam. Other characters – inspired by the famous 1932 “Lunch Atop a Skyscraper” photograph credited to Charles C. Ebbets – enjoy a lunch break seated on a beam.

Key to the heavyweight lifelike look but actual light weight of Jones’s I-beam kinetic art pieces is his choice of SINTRA graphic display board by 3A Composites USA to create the beams.

Experienced in set and prop building for theatrical, television and film productions as well as furniture-making, Jones, who is based in Greensboro, N.C., had used SINTRA for many years to create signage when he worked for the City of Greensboro.

“I wanted to find a material that would create the illusion of an I-beam but would be lightweight,” said Jones. “I had encountered SINTRA for display work. It was flat, clean and perfect for applying vinyl graphics; and, it could be drilled easily. It was very consistent in color and density.” 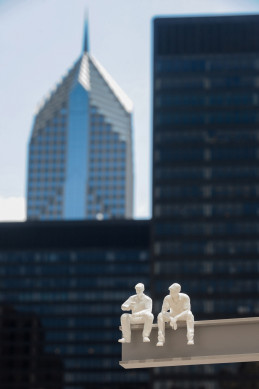 (As the original high-performance moderately expanded PVC board, SINTRA is specialty-engineered to be a premium solution for graphic display projects that require the highest-quality material. SINTRA is unsurpassed for its printability, quality, consistency, durability and performance, offering superior surface characteristics and physical properties when compared to competitive products. SINTRA is available with premium bright-white surfaces that produce excellent digital- and screen-printing results. In addition to the brightest white, SINTRA also is available in a broad range of colors in gauges ranging from 1mm to 12.7mm and in standard sheet sizes ranging from 48-by-96 inches up to 2 meters by 120 inches.)

Jones has been following his inspiration to create mobiles since he first spied the monumental untitled mobile designed by artist Alexander Calder for The National Gallery of Art in Washington, D.C., during a family trip in 2006.

“It was Calder’s ability to use simple material to create work that was so simple in structure but so complex in its language and visual effect,” said Jones. “The massive mobile hung in the rotunda of The National Gallery of Art measures roughly 910 cm by 2,315 cm and weighs 920 pounds. And, yet it seems to be floating. It had a profound effect on me. I've always had an equal mixture of mechanical aptitude and artistic sensibilities. So when I saw Calder's work for the first time at The National Gallery of Art, I understood it. I made a connection instantaneously.”

Jones began creating his self-described “Calder-inspired” mobiles from SINTRA in 2007 for residential display as a part-time pursuit as well as started teaching mobile-making classes.

Creating mobiles grew into a full-time business for both Jones and his wife, Naomi, with the addition of Modern Mobiles– mobile-making kits that allow anyone to build their own repositionable mobile.

“When I taught classes on mobile-making, students would ask if I could make something that they could put together,” said Jones. “So I developed a slider and made pieces to attach from SINTRA. It was a very available material and possessed all of the properties that we needed. … People were inquisitive about mobiles and wanted to build their own. The aesthetic we provide with the kits bumps it up a notch or two. We just needed to find the right material. That was SINTRA.”

The mobile kit includes a series of modern geometric-shaped pieces made from 3mm SINTRA in primary colors. Customers build their own mobiles with these shapes by attaching them to aluminum wires and positioning them with plastic sliders (both included in the kits.) The shapes easily can be repositioned to create a variety of designs. In addition to being available for sale on Etsy.com, the Mobile Kit by Modern Mobiles is available for sale at several museums, including: The Solomon R. Guggenheim Museum in New York, The Museum of Modern in New York, The San Francisco Museum of Modern Art, The National Gallery of Art in Washington, D.C., and The Smithsonian Museum in Washington, D.C.

When Jones began experimenting with creating the I-beam aerial art pieces in 2012, he once again turned to SINTRA. Envisioning hanging sculptures that would span an area from 18 feet to 24 feet wide, Jones needed a lightweight substrate that easily could be cut and heat formed.

“With the mobile kits, we needed to be able to drill a hole in the edge of the material to accept the rod,” said Jones. “We tried other materials and went back to SINTRA. For the sculptures, we heat it up and shape it. SINTRA has been a terrific product for me. Its light weight has been critical for the sculptures because the beams are designed to float almost like they are weightless. I couldn’t make them out of steel.”

Jones builds the I-beams by cutting strips from 4-by-8-foot sheets of 6mm SINTRA in the gray color (although he has painted some beams red). The beams are constructed just like steel I-beams with a top plate and a bottom plate, which are both grooved to accept a vertical piece that is secured with epoxy.

Jones uses a combination of model-making computer software and gaming animation to create the characters, which are 3-D printed out of ABS plastic.

Jones said he was inspired to create the I-beam sculptures because it allowed him to combine two of his favorite things – the illusion of weight and humor.

“An I-beam is the perfect object to mess with someone's perception of weight,” he said. “The sculptures look just like real I-beams, so people assume that the piece weighs a ton when in fact one of the largest mobiles weighs less than 10 pounds. It gives the impression of weightlessness the same way the large Calder piece does. It floats effortlessly. “

As for humor, Jones said:  “I thought that it was funny to see a guy walking off the end of the beam looking at his cell phone. There is an instant connection with the audience. It's also a very contemporary distraction.”

Jones has created eight I-beam sculptures in varying sizes for both public and corporate display. The first was selected in 2016 by the North Carolina Art Council as a public installation at the Piedmont Triad International Airport in Guilford County, N.C. His latest work, entitled “Beams,” is displayed at Artplex Gallery in Los Angeles.

When asked where he plans to next take his exploration of kinetic art, Jones answered succinctly.

“Bigger; always bigger,” he said. “I would like to create a large piece for a theater/dance production to serve as an interactive scenic element. We'll see. It seems like a cool idea.”

The PRINTING United Digital Experience will span three action-packed weeks beginning October 26 and running through November 12. Representing market segments throughout the industry, the Digital Experience will offer over 100 world-class educational sessions and more than 40 product launches for everyone across all job functions to access, at no cost.

Without a Second Stimulus, Expect Recovery to Slow
END_OF_DOCUMENT_TOKEN_TO_BE_REPLACED