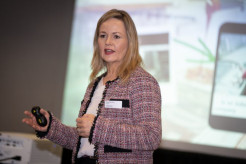 In a press briefing, Felix Mueller, president of Heidelberg Americas, and Sonja Mechling, CMO of Heidelberger Druckmaschinen AG, talked about the kind of company Heidelberg has become since the last time it filled a booth at a U.S. trade show.

One of Heidelberg’s chief ambitions now, said Mechling, is to help printers achieve a greater measure of overall operational effectiveness (OEE), a key indicator of how much actual production they are getting from their equipment. Although, according to Mechling, industrywide OEE is only 25%, Heidelberg believes it can double over the next 10 years with the assistance the company provides.

Automation technologies such as Push-to-Stop and Intellistart 2 are helping printers deliver more jobs per shift while their machines, connected to Heidelberg’s user cloud, generate data that can be used to make production even more efficient. Mechling said Heidelberg is continuing to build an industrial ecosystem within which printers can attain peak OEE.

Mueller said this is being accomplished by printers taking part in Heidelberg’s Subscription Model, a program in which the company provides everything needed for production without requiring the user to invest in capital equipment.

He said that 56 Subscription Model contracts are in place worldwide, including six in North America.

Selling Both Print and Promotional Products

PRINTING United Brings Industry Under One Roof for Monumental Expo

Mimaki Celebrates 20 Years in the Americas

The Outlook for Print in 2021
END_OF_DOCUMENT_TOKEN_TO_BE_REPLACED