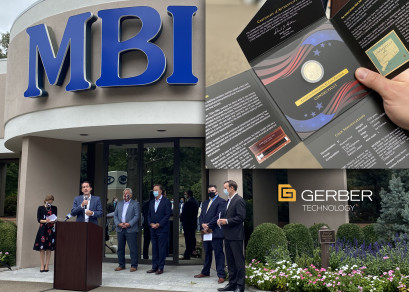 The United States Mint is honoring Gerber Technology’s dedication to innovation by featuring the Gerber Variable Scale on the American Innovation Coin for Connecticut. The American Innovation $1 Coin Program is a multi-year series to honor innovation and inventors from each state and U.S territory. The company’s innovative heritage is thanks to their founder, Joseph Gerber, who invented the Gerber Variable Scale in 1945 while a student at Rensselaer Polytechnic Institute. During his lifetime, Gerber was driven by his passion for innovation, holding over 600 patents and his inventions transformed manufacturing. Today, the company continues to build on the spirit of innovation by partnering with their customers to drive change across the manufacturing sector. As digital transformation becomes critical in the new world, Gerber is committed to being the partner their customers can trust to continue to be successful.

“When you look at Gerber Technology and the many industries we serve, nobody has had a greater and broader impact than Joe Gerber in automation,” said Leonard Marano, Chief Commercial Officer of Gerber Technology. “Gerber’s 72-year history in Connecticut began with the Gerber Variable Scale. It is a great symbol of ingenuity and set the foundation for Joe's innovations in computable plotting, graphic printing and flexible material manufacturing.”

On September 18th, Gerber Technology was honored by government officials during a celebration at MBI Inc, the company who is responsible for marketing and distributing the Connecticut American Innovation Coin. During the event, Connecticut Governor Ned Lamont highlighted Joe Gerber’s dedication to innovation and lauded the company’s recent efforts and commitment to helping people develop personal protective equipment (PPE) by saying, “that’s what innovation is all about.”

Before the graphing calculator, there was the Gerber Variable Scale which allowed scientists and engineers to quickly and easily understand and solve problems of scale. Just a few short years after he and his mother escaped Nazi-controlled Austria, Gerber developed the first version of the variable scale using an elastic band from a pair of pajamas. By the 1950s, the Gerber Variable scale was a major success and a universally accepted tool for engineers and architects worldwide.

“I think it’s really important that we remember and celebrate the folks who make this country happen. You heard loud and clear that Connecticut has been one of the innovation capitals in America for many, many years,” said Lamont. “We have a lot more Joe Gerbers in different spheres and industries, helping Connecticut to be a continued leader of innovation. Our best days are ahead of us and that’s what this coin represents.”

#RyansRemarks 55: Your Brand is the Difference