Genevieve Baldwin: Steering the Industry Toward a More Inclusive Path

When’s the last time a job at a restaurant signaled the start of a career in print? For Genevieve Baldwin, that was exactly what happened. With a newly acquired graphic design degree in hand and a restaurant job in Portland, Oregon — working in the printing industry hadn’t even occurred to her.

But soon enough, that all changed. 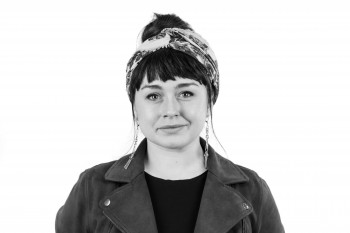 “I didn’t know what my next steps were, and the restaurant owner knew I was looking for a career path, so he hooked me up with the local printer that printed his menus,” Baldwin says. “That’s actually how I got started in printing. Initially, I just worked in a two-woman print shop doing primarily digital print and some large-format fine art printing.”

From Boutique Print to the Commercial World

Baldwin began her career as an apprentice but quickly moved her way up to managing the operations alongside her mentor. Over the three years she worked at the boutique print shop, Baldwin discovered that her favorite part of the job was helping clients accomplish exactly what they wanted — something that translates into her current position today.

“Something I really liked when I was working in a smaller shop was doing fine art printing for local artists in the area,” Baldwin says. “Prints can be expensive, and it can feel like you’re in over your head trying to figure out what you want. So helping guide people to what they want and show them like ‘Oh, this will be the most conducive for what you’re looking for,’ was definitely where I really began to love what I do.”

Eventually, Baldwin decided she wanted to be closer to family, so she moved back to her hometown in Wisconsin and applied to Thysse, where she’s been since July 2021, working mostly with large-format projects.

Now, at 27, she is the project manager for Thysse, a commercial printer located in Oregon, Wisconsin, that specializes in the brand experience and helps bring brands to life.

In her role as project manager, Baldwin’s daily tasks consist of working with clients that come to Thysse to have their spaces branded, and from there, Baldwin steps in to make the process as seamless as it can be for the client. As project manager, Baldwin is constantly finding different ways to streamline processes and is always striving to make her clients comfortable and confident.

“I try to focus a lot on ways to improve internally as far as like standardizing and streamlining our procedures so that everything can be really conducive for the client,” Baldwin says. “But as far as assisting our clients and making sure they’re getting exactly what they need, I feel I do a good job of being on their side and advocating for them. And they trust me to get them what they want, and I will be there to steer the ship for them without them having to stress.”

Bringing Representation and Fresh Perspectives to the Industry

As a young woman in the industry, Baldwin has faced challenges, but nevertheless, she has forged a path for herself in an industry that’s lacking female representation.

“Me being a young woman has definitely reared its head on occasion, and unfortunately, there’s no silver bullet that can help someone move through those spaces and do it gracefully,” Baldwin says. “I have knowledge that you should respect, and once people let me show that, I think that they start trusting me and think, ‘Okay, cool, I can let her do her job, and I can get out of her way because I trust her.’”

As a younger person in the industry, Baldwin sees her age as one of her greatest strengths because printing is an aging field, but someone with new perspectives and ideas can bring a lot to the table.

“I think having someone who is excited and who is actively coming up with ways to improve, who came up in a younger generation and has different perspectives that haven’t been introduced in a wild way because there aren’t that many of us to offer insight ... offering that to Thysse has been really great,” Baldwin says.

Moving Toward a Sustainable and Inclusive Future

Baldwin hopes that through her current position, she will help Thysse and potentially other printing companies recruit more young workers and their ideas, and one day, she hopes to move up to a position where she can help elevate less-represented groups in the industry.

Also in Baldwin’s future is the hope to reduce the print industry’s carbon footprint.

“I want to continue helping people brand their spaces, especially through experiential graphics, but I want to find ways to do it more sustainably and find other eco-friendly alternatives that work well with our equipment,” Baldwin says.

A Guide to Hiring the Right Designer for Your Print Shop

Bridging The Age Gap in The Workforce