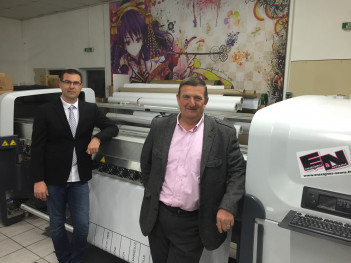 Originally a sign company, Enseignes & Neons was founded by Gaylor Herold and his father, Christian. They made signs — letters, figures and logos painted by hand, later cut from wood or plastic and made out of neon tubes, LED and other materials.

The company now has a much broader scope, also producing digital wide-format signs. Enseignes & Neons specifically opted for latex print technology back in 2008, when they made the decision to incorporate HP (Booths 1147 and 1161) latex technology because it was eco-friendly.

However, printing is only one part of the equation. You have to cut and finish digital projects as well. In 2013 Enseignes & Neons acquired an Esko (Booth 938) XP24 digital finishing machine. The 66-by-126-inch size matched the company’s requirements and was the only machine at that time to have a 3Kw cutter, strong enough to cut even V-notches in re-board plates. According to Gaylor Herold, this machine still runs seamlessly, handling all the finishing work generated by the company’s latex printing systems.

Its workload was becoming critical as a result of growth in the region and many new customers. It was time to review the overall workflow and determine whether automating the processes to check and validate incoming files, and the imposition of files to find the optimum solution for media and waste reduction, would be the best way to optimize operations with the tools the company already employed.

Herold and his team decided to purchase Automation Engine from Esko, to introduce the production improvements in order to save time, reduce waste and cut costs.

Previously the turnaround time of incoming files was too long because they had to pass through the prepress, RIP, printer and finishing stages. Capacity needed to be increased and the production cycle required more standardization.

Herold remarks, “In fact, by ‘instructing’ Automation Engine how to print and cut, we are reducing the time at the prepress department to prepare and check incoming files by approximately 50 percent. We are saving another 50 percent optimizing the files for production and validation by the customer.”

Herold analyzed the differences between the former manual workaround and the automated workaround introduced in the overall production workflow. The number of required steps is already down to 30 percent, perhaps even less, of those required before Automation Engine was installed.

“Previously the entire process between a file entering our system, and leaving as a product, took at least one hour. With Automation Engine it is down to approximately five minutes,” Herold explains. “Moreover, the automated process reduces the number of human errors and the need for human intervention. If the system tells us we require human intervention, we will obviously take action.”

How Did COVID-19 Impact Catalogs?
END_OF_DOCUMENT_TOKEN_TO_BE_REPLACED