Charlotte, NC-based DeLargy’s Print Solutions began its life 42 years ago as an answering and secretarial service. Over the years, the company added office products and printing services. Today the company has offset, digital and wide-format printing and still maintains its office products business.

DeLargy’s Print Solutions entered the signage business with a roll-to-roll eco-solvent printer a few years ago. The company realized it was likely leaving business on the table because of the requirement for post-print mounting, lamination and other manual finishing processes needed for jobs that required rigid surfaces. To meet these requirements, DeLargy’s began investigating wide-format flatbed printers that would enable high-quality printing direct to rigid substrates, a process that promised to be more cost-competitive than its existing process. Key requirements were white ink and the ability to print high-quality fine lines and small text. The company investigated possibilities at the 2017 SGIA Expo and chose the EFI (Booth 301) Pro 24f dedicated flatbed LED printer.

“I was amazed with its ability to print small text,” says Jimmy DeLargy, President. “We looked at a number of other flatbeds that couldn’t do it. And the printer’s white ink opens up many new opportunities to print on clear and dark substrates as well.”

Revenue Growth and a Fast ROI

DeLargy’s installed the printer in mid-January 2018, and began generating revenue immediately. “Our revenues are already up 18 percent because of this new printer,” DeLargy says. “And it will easily be paid for in 18 months or less.”

The printer gives the company capabilities it did not have before for direct-to-substrate printing of rigid signage, eliminating the time and expense of mounting and lamination.

DeLargy has also created an eight-up jig to accommodate its most popular signage sizes. “We tape the jig to the table and use a template to impose the artwork,” he says. “Once printed, we just slide off the print, reload and keep going. It’s remarkable how fast we can get things done. Before, we had to wait 24 hours for prints to dry before we could finish them. Now we can have 100 signs out the door by 11 am!”

The company does a lot of printing for nonprofits as well as B2B work, and fast turnaround is important for these customers. “It’s not all that unusual to get calls on a Friday for 25 signs needed at event on Saturday,” he says. “We couldn’t have touched that before, but now it is a breeze. I never realized how many opportunities were passing us by with our existing customers! I never would have thought that to be the case.”

The new printer has also opened up new creative applications as well. “We had a bride who wanted Plexiglas place cards for the 50 tables at her reception,” DeLargy explains. “We printed a piece of six by nine-inch clear Plexiglas for each table, with the guests’ names in alphabetical order. It was printed on the back with a white background. We bent the Plexiglas bottoms to form a stand. The result was absolutely beautiful, and the bride was delighted.” 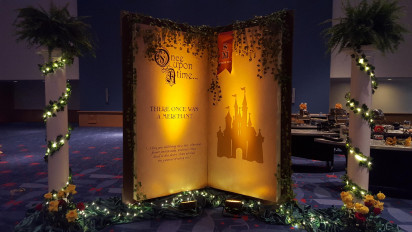 The EFI Pro 24f at DeLargy’s has been useful for direct-to-rigid applications, such as this display for a local high school prom.

He also cites another recent project, a backdrop printed on four by eight-foot corrugated plastic. He reports, “It was the City of Charlotte skyline for a local YouTube channel that publishes a kids’ news program. The customer is thrilled with the outcome, and it looks really great. It was another project we couldn’t really have done before.

“We are absolutely thrilled with this printer,” DeLargy adds. “It’s a lot more fun quoting a job when you can be competitive.”

Another application the Pro 24f has improved is menu boards for food trucks. “The print can be small on these,” DeLargy explains, “EFI was the only vendor we found that could meet that requirement.”

In terms of the support he has received from EFI, DeLargy had this to say: “EFI has been great to work with. If there are any issues — and there haven’t been many — they are right there to take care of it.”

The company’s overall impression is that the printer has given DeLargy’s Print Solutions a path to higher-value digital graphics work that meets growing customer demand.

“I was amazed at how much direct-to-rigid work and printing on clear and dark substrates my existing customers were doing,” DeLargy says. “While we have gained new customers because of the Pro 24f, we have also been extremely busy with existing customers. I’m tickled to death we got involved. It’s opened up a lot of doors for us.”

How Did COVID-19 Impact Catalogs?
END_OF_DOCUMENT_TOKEN_TO_BE_REPLACED