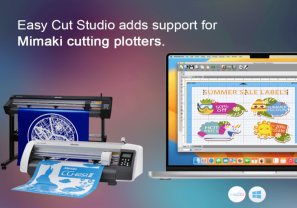 EasyCut Studio announced that its vinyl cutting software has been fully tested and can be used with Mimaki vinyl cutters, including the newly released CG-AR series and the CG-SRIII series. For users, this provides the assurance that the latest version of EasyCut Studio software will seamlessly integrate with their Mimaki cutting plotter.

Mimaki is proud to offer a range of vinyl-cutting plotters that can meet a wide range of application needs. The CG-SRIII Series of roll-based cutters are available in three widths. These models feature continuous crop mark detection for precise contour cutting. The CG-AR Series are the entry model of a roll-to-roll cutting plotter with improved cutting performance, compatibility with a wide range of cutting materials, and enhanced usability.

EasyCut Studio provides the ability to cut any shape and font with your Mimaki cutting plotter and supports file formats, including SVG, PDF, EPS, AI, and so on. The software includes key features such as image vectorization, rhinestone, and contour cutting workflow, which enhance the performance capabilities of the Mimaki cutting plotters. EasyCut Studio is currently available for all Mimaki CG-AR series, including CG-60AR, CG-100AR, and CG-130AR, As well as all-new Mimaki CG-SR series models including CG-60SRIII, CG-100SRIII, and CG-130SRIII.

“Software has to be fast, reliable, and easy to use in today’s printing and cutting environment, EasyCut Studio is an innovative software solution that is constantly evolving to better meet our customer's needs,” said Eric Lee, product manager at EasyCut Studio. “The tools, technology, intuitive interfaces and workflows for everyday use in Easy Cut Studio are designed for the modern user, and continue our vision in providing superior software solutions to print & cut businesses worldwide.”

All EasyCut studio users will benefit from the introduction of new OS support, which now includes macOS Monterey, macOS 13 Ventura, and Windows 11. Additionally, new cutter models and drivers have been added. In addition to an impressive list of existing devices, users can now use V5.020 to drive Silhouette Cameo 4 Plus, MagicTransfer, JiaChen, and Vevor KI series cutters. The new version also comes out with more effects, and some other fixes and improvements as well.

Some of the new features included in EasyCut Studio v5.020:

Get in the Game