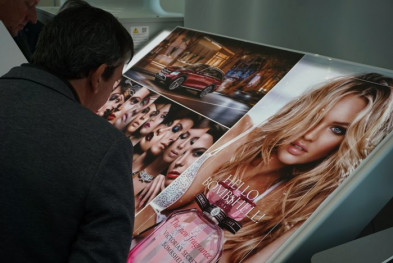 BRIXEN, Italy - May 31, 2018 - Durst unveiled the latest technology developments in large format print, service and software at the successful Durst Tech Days (May 18-19).

Over two days at the Durst headquarters in Brixen, South Tyrol, Italy, and its other manufacturing site in Lienz, East Tyrol, Austria, guests were told that sales of its new award-winning technology, the P5 platform, are building so fast that delivery times are now up to 10 weeks. Hot on the heels of winning the European Digital Press Association (EDP) Award for P5, which was presented to Durst CEO Christoph Gamper during FESPA, Durst reported first results from the successful P5 field-test at Panorama in Spain. Panorama printed around 24,000 sqm in the first month alone and everything is progressing well.

For the Durst Tech Days at Brixen the focus was on roll-to-roll printing systems, software and preventive maintenance concepts; at Lienz there were demonstrations of Durst P5 and Durst Water Technology for flatbed printing on the agenda. Tailored presentations were held over the two days.

Unveiled for the first time were:

In another step forward, first plans have been unveiled whereby print service providers can benefit from Durst’s world-class technology without making a large initial capital outlay. The idea involves Durst investing in print businesses through a rent-first concept for up to four years. Those who qualify for the scheme will be offered a top-maintained pre-owned machine through a “full service contract”.

Christoph Gamper, Durst CEO, says: “The Durst Tech Days were created to give our customers an exclusive preview to our latest technologies and thinking. Designed to address every day production needs and meet ever-changing market demands, the innovations promote efficient, cost effective and optimum operation.”

Barbara Schulz, EVP Global Sales, adds: “New developments, to be effective, need to be put in context. Customers want to understand how they will work in their own production environment to maximize their investment. Durst Tech Days were created to allow them successfully to do just that.”

The Outlook for Print in 2021
END_OF_DOCUMENT_TOKEN_TO_BE_REPLACED