Durst, manufacturer of advanced digital printing and production technologies, will use its booth #7816 at PRINTING United in Dallas, from Oct. 23-25, 2019 as the launchpad for the new Rho 2500 Series as well as showing the award-winning Durst P5 350 printer in North America for the first time.

An evolution of the Rho 1300 Series, the newly-designed Rho 2500 is a modular, versatile industrial production printer available in three different versions with upgrades possible at any time. All are equipped with Durst Workflow Print new production software and the monitoring tool Durst Analytics. The machine will be running alongside the Durst P5 350, which will also be making its debut at the inaugural PRINTING United show. The Durst P5 350 – launched at FESPA – won the European Digital Press Association (EDP) award for Flatbed/Hybrid Printer < 250 sqm/h at the same time in May. 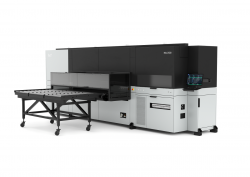 The Rho 2500’s new 8pl printheads with variodrop printing technology enable higher resolution of 1000x800dpi, finer printing quality and excellent sharpness with productivity up to 1,200sqm/h. Other possibilities are for volume production, high speed and a Smart 4 printing mode for the six-color version. Starting with six head rows for the S model, the next level for the Rho 2500 M comprises eight head rows and the Rho 2500 L has 10 head rows. All can have white. Other options include a stacker for ¾ or full automation, a dual track printing mode, a safe ink refill identification system and camera control on the outside of the printer while operating the monitor screen.

Tim Saur, managing director of Durst North America, said: “Order volumes this year have been exceptionally strong, so we are looking forward to continuing the momentum by having live systems running at PRINTING United. The P5 is an outstanding new technology platform while the launch of the Rho 2500 industrial production printer provides a modular system that can be upgraded at any time. All of our machines benefit from the comprehensive Durst software solutions to maximize the potential of process automation and digitization.”

Christian Harder, Durst’s global sales director, Large Format Printing, said: “PRINTING United gives us another perfect platform to showcase our world-class production, software, and service capabilities. North America is an extremely important market for us and has an abundant growth potential. The show’s objective - to focus on the opportunities that convergence presents - resonates with our own business philosophy. We are really looking forward to the exhibition.”

How Did COVID-19 Impact Catalogs?
END_OF_DOCUMENT_TOKEN_TO_BE_REPLACED