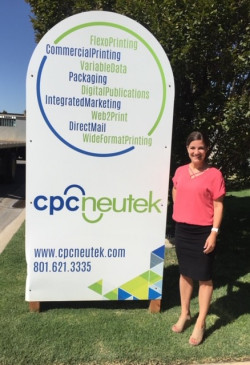 One of the more comprehensive printIQ (Booth 11652) builds undertaken recently was for CPC Colorado, which recently expanded through the acquisition of a new company specializing in wide-format and flexo. CPC had been using its current MIS for more than 25 years. With the acquisition of the new company — along with its two internal systems — CPC wanted to bring everything into its existing MIS system.

To do this the company spent $25,000 up front to have two locations, however they were still required to VPN to the original site. “Once we started working with this amended system, we quickly learned that due to the amount of work-arounds that we needed to do to make it fit our needs, it wasn’t going to suffice,” says Mandy Arellano, operations manager, CPC. CPC began working with its MIS company with the intention of addressing the problems, and helping refine the software to more effectively suit the label market.

After receiving a rather large quote for their MIS to amend the software, CPC decided to investigate other available options. At an industry trade show, Arellano crossed paths with Linda Pollard from printIQ. Pollard has worked for many years in the print MIS field before she made the change to printIQ and its MWS (management workflow system). CPC demoed multiple different sites but found there were less than a handful of companies that dealt with all the areas they specialized in. After running into Pollard and meeting some of the IQ team, CPC staff had the printIQ MWS demoed and were blown away.

Arellano says, “We were pleased to see the system gave us 95% of what we were looking for, and some unexpected additional bonuses. Our group walked away from that conference having printIQ as our number one choice. However, we were certain we wouldn’t be able to afford it.”

CPC had a comprehensive list of requirements they were looking for:

Estimating is Critical for Wide-Format Printing

Streamline Your Business with the Right ERP System

The Outlook for Print in 2021
END_OF_DOCUMENT_TOKEN_TO_BE_REPLACED