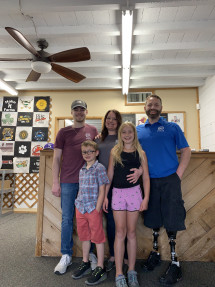 Josh Chamoff (right) with his stepson, Tanner Parrett (left), his wife, Heather Chamoff, and their children, Jonathan and Charlotte.

I am the owner/operator of Shirts By Francis Inc. in Salina, Kan. We are a second generation, family owned and run small business that was purchased by my mother, Katherine Francis, and my stepfather, Sean Francis, in 1986. We screen-print T-shirts and other kinds of garments for commercial, institutional, and individual customers in and around the Salina area. We also do heat transfer vinyl printing, and offer embroidery as well.

I have a total of four employees who do not include my wife, Heather; my stepson, Tanner Parrett; and my daughter, Charlotte. They have been stepping in for my workers, whom I have had staying at home through these never-before-seen times.

Toward the end of March, the COVID-19 pandemic caused the state of Kansas to begin issuing stay-at-home orders. Then I had to close the close the doors, and I came in only to finish up jobs that were already in progress. The last day I had employees still coming to work was March 26.

As soon as I heard about the Paycheck Protection Program (PPP), my plan was to apply for it and keep paying my employees. I contacted the bank that my business account is with on Monday, March 30 to see what kind of documents I needed to round up to apply.

I probably filled out three or four applications, because the application kept changing. I kept getting a different one each day in PDF files telling me to update, or to fix, or to add a few things. That was the hardest part, getting all the information together.

I had everything ready to go on Friday, April 3 to send over to my account rep at the bank. But the bank had so many applicants come in on the first day the loan was offered that I was denied, which I found out on the morning of April 6. (April 3 was the day the PPP began accepting loan applications through participating banks – Ed.)

On the afternoon of the 6th, I reached out to a local Kansas bank that holds my home mortgage. The big problem for the banks was that they did not have instructions on how to close the loans and when the money would be coming to them. So, the second bank gave me half the loan up front and told me they would deposit the other half when all of the confusion with the plan cleared up.

I received the other half about three weeks later. I should now have enough to pay my employees for two, maybe two and a half months – enough for May and June, and maybe a little bit into July.

I thought about applying for a $10,000 Economic Injury Disaster Loan (EIDL) from the Small Business Administration, but I held off doing that when my accountant told me that the money would be deducted from the PPP loan. I’ve also tried applying for grants from U.S. Chamber Of Commerce Foundation Save Small Business Initiative, and from a fund supported by Sam’s Club.

On the grant side, I haven’t been so lucky, but I’ve been trying to stay on top of it. I’ve been filling out these applications on the first day they’re available, although I’m still not getting through to a lot of them.

So, we’ll have to see. The big thing I’m worried about now is what kind of work is going to be coming in. After about a month or so, I’m going to have to look into the profits from last year vs. the profits for this year in the same month, and see the difference.

This is usually one of the busiest times for my business as summer approaches with the ball teams, tournaments, festivals, fun runs, camps, and many other gatherings. All of these jobs are lost for 2020. A lot of my business is done through e-mail, online, or by phone calls, but I still get a lot of walk-ins. So all that has been, of course, gone. And then it’s just with the uncertainty of everything. Right now, some of my customers don’t know what to do about their future orders. 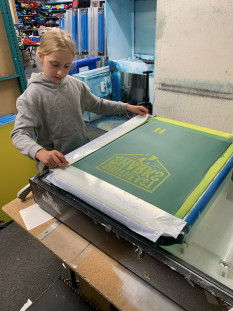 Charlotte Chamoff prepares a screen for printing at Shirts by Francis, Inc.

For example, I do a lot of shirts for a fireworks company here in town. He always gets his stuff by around May so he can start planning for July. I have 6,000 shirts to print for him, so it’s like, “Do you want me to wait?” Or, “Do you want me to just get them done so you’ll have them when you need them?”

So it’s really the uncertainty, because no one knows what’s going to happen, when things are going to start back up, or how it’s going to look. That’s kind of a weird thing right now.

I’ve been shipping a lot of the orders that people were going to pick up, so I took some costs there. If they are within 20 miles of Salina, I’ve been taking the orders to my customers in my own car. I’ll just pack up five orders in one day and drive around Salina and deliver them.

We’re a seasonal business, so its whatever sports season is happening. The school year in Kansas starts in August. Football, volleyball, tennis, cross country, booster clubs, and all of the activities at the beginning of the school year is the biggest boom of the year for orders. From August through the middle of December I’m pretty swamped. It slows down a little around January-February.

By early March, my baseball/softball teams start gearing up for the upcoming season. I had already printed and sent out a couple of my big team orders, which include uniforms, fan gear, hats, decals, etc. These orders have created quite a bit of business for my company, and most are completely lost for this year.

I do printing for proms, state tournaments, summer camps, Bible schools, and sports camps that happen right after school ends. All of those, this summer, are going to be gone. All of the festival business, the 5K runs, those are some of the bigger orders that come in. For some of those fun runs, you can sell 2,500 T-shirts.

I already delivered thousands of T-shirts for the Smoky Hill Festival, a big event here in Salina. They have since cancelled that festival. It means they are probably going to use those shirts for next year’s festival, so I’m not going to get that order next year either. I did have a 1,000-shirt order for a locally owned gym, but he has closed and laid everyone off.

The biggest thing with bringing my workers back is that it’s an unknown – trying to keep them safe once they do come back. Some of the manufacturing plants here in Salina have set up tents that their workers have to go through before the workers can get into the plant. I don’t really have the means to do that.

The town is around 50,000 people, and when somebody here gets COVID-19, people know. In the local paper it’s like, “She went to this Dillons, she went to this Walmart.” We’re pretty much staying informed, but it’s still a scary time.

For now, my family are the ones who are keeping the business going. My stepson, Tanner, who is a sophomore at Kansas State University, has helped me run the orders I still have coming in. My wife, Heather, teaches fourth grade and is doing home teaching right now with her students. She has Zoom meetings in the morning and at 6:00 in the afternoon, and she’s been coming down here between her school obligations to help. We are also deep-cleaning the store to make it safe for the workers when they do come back.

Our daughter, Charlotte, is only nine. She’s very eager, and she’s getting her school work done right when they post it. I’ve brought her here to work a few times, doing things like taping screens and stacking shirts. She keeps asking me when her paycheck is coming.

The biggest question now is how everything will be when business does get back to normal, how will 2020 affect 2021. The uncertainty of the future is the hardest and scariest part about this whole pandemic.

The teams I have completed, I’ve already gotten those uniforms out, and I’ve already gotten some team gear out. All of that is going to be usable next year. What I’m worried about is all the teams that have already stockpiled it, and they have brand new jerseys and uniforms right here. They could say, let’s just use these, we don’t even need to get new ones.

Once everyone gets back to work, I’ll be curious to see if they are spending money on those extra things like fan gear, as much they have before this time. I hope people will be very excited to try to get back to the norms, but understand if the money is not there then it will not be possible.

I’m hoping that it’s not going to change people’s buying preferences or spending. It’s not like the fan gear is an essential “need to have item.” Team support has gotten bigger and bigger for us every year.

Things are just starting to open up again in Salina, and I can begin bringing my employees back to work gradually. The Paycheck Protection Program really helped me to cover them between the time they had to go home and the time they will be able to start earning again.

But, if I were asked to go to Washington, D.C. to state the most effective thing the federal government could be doing right now to help small businesses like mine, it would be to lead. I want a plan to have more clear-cut, precise information. I think it should be done federally, so everyone in this country can be on the same page and get behind the plan with unity.

I know it’s a state to state thing right now, but that just causes so much confusion. I think the confusion is what’s making people scared to go out of their homes. So I would say that even if the plan had to be modified as time goes on, you would have something in place that’s concrete. It’s just the uncertainty of the everyday changing of things that’s extremely difficult to handle, and it causes a lot of stress and anxiety.

If there was just a plan people could wrap their heads around and get behind, that would make me feel more at ease. The stress, anxiety, and post-traumatic stress of all that’s happening, and for consumers to even go back out like it was before – I think that’s going to take a while.

(On April 30, Kansas Governor Laura Kelly announced “Ad Astra,” a plan to reopen the state in phases beginning on May 4 – Ed.)

Josh Chamoff is the owner/operator of Shirts By Francis Inc. in Salina, Kan.

2021 State of the Industry Report: The Economic, L

The Outlook for Print in 2021
END_OF_DOCUMENT_TOKEN_TO_BE_REPLACED