Colorado and Arizona Come to Delaware

Ever since University Printing at the University of Delaware in Newark installed two Canon wide-format printers, Manager Michael Czerepak says he can’t imagine living without them.

Back in May, the 10-person in-plant added a roll-fed Canon Colorado 1630 and a Canon Arizona 1360 GT flatbed printer able to print on 4x8' substrates up to 2" thick. The shop’s dual-head Mutoh printer was on its way out, Czerepak says, and an upgrade was overdue.

“During the pandemic, everyone needed floor signage, and we were trying to keep up, and the problems with the device became glaringly apparent,” Czerepak says. “Then it started to break … and it was taking us almost an hour to print a 36x80' banner.”

Now, while one of the new Canon printers cranks out 80 banners, the other can be utilized for printing stickers and canvases. Czerepak even jokes that sometimes when he gets an order, a wave of panic washes over him, but then he’s instantly relieved when he remembers he has the new equipment.

Thanks to the Colorado and Arizona printers, the university’s commencement order — which is usually a yearly ordeal for the in-plant — was completed well under the deadline. More than 100 full-bleed 18x24" Coroplast signs were printed in just a day.

“They were all worried because they only gave me a couple of days, and they were like, ‘are you going to be able to get it done?’ And … in the back of my mind I was freaking out as well, but to them I was playing it cool … and then I basically did the whole job in a day and made sure they knew that,” Czerepak says. 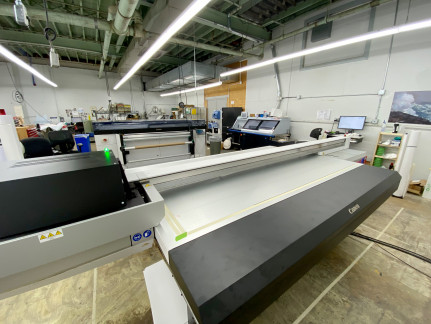 The new wide-format equipment at the University of Delaware.

With the help of the new machines, Czerepak says the in-plant has begun dipping its feet into vehicle graphics.

“A member of the police force came in, and we talked about what we’re able to do, and he asked if we could print on reflective vinyl, which in the past we weren’t able to do, and now we can,” Czerepak says.

And since the Arizona can lay down raised high-gloss spot varnish, Czerepak hopes that dimensional varnish for applications like braille signage and textured paintings will be in the in-plant’s future.

For now, though, Czerepak is telling everyone he can about his in-plant’s new equipment and capabilities.

“I tell anyone who will listen to me, and I think people get kind of sick of me because I’m like ‘hey how’s it going? By the way, we have an Arizona and Colorado,’” he says. “But the word is getting out.”