Collaboration to Benefit the Entire Industry 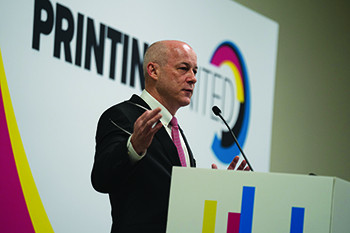 Ford Bowers, president and CEO of SGIA,
addresses a crowd on Wednesday morning.

In a press conference Wednesday, Oct. 23, Ford Bowers, president and CEO of SGIA, and Dave Leskusky, president of NAPCO Media, offered their insights into what PRINTING United will mean to the industry and how the two organizations behind the show have grown even closer over the past few years.

As SGIA and NAPCO Media collaborated on the show’s development, Bowers explained that it became increasingly apparent that the silos and segments that had kept printers within their own worlds were dissipating, as printers began to explore adjacent segments of the industry. Through research endeavors and industry observations, SGIA and NAPCO Media gathered data that outlined how print service providers were adopting new technologies and exploring new printed products they could offer to their customers.

In launching PRINTING United, Bowers explained more than 680 exhibitors — an increase of approximately 80 compared to 2018 — have made the trip to Dallas, many of which are supplementing the wide-format and garment printing equipment that SGIA Expo attendees are accustomed to seeing, with product offerings for commercial, in-plant, and packaging segments.

As PRINTING United continued to generate buzz throughout the entirety of the print industry, Bowers said that it became clear that expanding the relationship between SGIA and NAPCO Media could provide additional benefits to the industry. This desire to grow the relationship between the two organizations led to SGIA formally acquiring NAPCO Media — a deal that became official on August 1.

“The relationship with NAPCO over the last couple years worked so well, and we were so in synch with what we thought the industry needed, we came up with lots of ideas we want to do after PRINTING United,” Bowers said.

Though NAPCO Media has become a wholly-owned LLC under the SGIA umbrella, Bowers explained that it will continue to operate as an independent organization, maintaining its headquarters and staff in Philadelphia. But by combining resources, such as audience development and data collection capabilities, new opportunities for the industry can emerge.

Leskusky explained that one of these new offerings, PRINTING UX, will launch at PRINTING United 2020 in Atlanta, providing exhibitors with the opportunity to host meetings in conjunction with the event. Leskusky said he was particularly excited that NAPCO Media has brought Frank Tueckmantel, who was instrumental in running the EFI Connect users’ conference, on board to oversee the development of the platform.

Another benefit of the acquisition of NAPCO Media by SGIA, Leskusky said, will be NAPCO’s ability to introduce the association to audiences that may be outside the print industry, but are common users of the medium.

“Walking the floor I felt like it was 1997 all over again,” Leskusky said. “Seeing the equipment and excitement out there takes you back 20 years.”

Cory Francer is the editor-in-chief of Packaging Impressions.