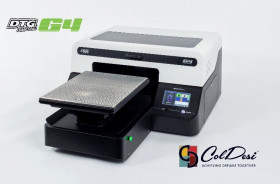 ColDesi today is excited to announce the adoption of Kodacolor Inks by Kodak for their newly released G4 DTG Printer.

“Our new G4 DTG Printer from Impressions Technology and DTG Digital will be powered by Kodak DTG Inks,” said Scott Colman, President of ColDesi, Inc. in Tampa, Florida. “Our tests prove out just how beautifully they print, and what a tremendous impact they have on reducing maintenance.”

“We have rigorously tested these new inks and are thrilled with the performance,” said Grant French, business development manager for Digital Ink Sciences.

ColDesi’s customers, who are assisting with testing, report that they are impressed with the softness, feel and vibrance of colors as well as the durability after washing.

“Since we couple the Kodacolor inks with our G4 printer, the increased densities of ink and higher saturation of colors allows the G4 to print faster and use less ink,” said Jerid Hill, DTG Product Manager.

With increase production speed being a top priority for the G4, ColDesi reports that with the new inks powered by Kodacolor, cure time is now 45 seconds at 340 degrees for both white and color inks.

“The vacuum platen can easily save 15-20 seconds, or even more, of loading and unloading garments,” Hill said. “High productivity isn’t only about how fast the printer prints, it’s also material handling, the G4 vacuum platen absolutely increases productivity, even on printers with similar speeds.”

The Kodacolor Ink will help ColDesi elevate the G4 to new heights in the direct-to-garment industry.

“Working with Kodak in developing these inks has been an easy experience. The chemist are very good at what they do. They listened to the needs of the industry and developed Kodacolor inks to solve issues the industry has been facing,” Hill said.

Understanding How Media and Ink Work is Key

How to Formulate Ink Adhesion

Inkjet Industry Resilient During the Pandemic

The Outlook for Print in 2021
END_OF_DOCUMENT_TOKEN_TO_BE_REPLACED