An Explosion of Possibilities at FESPA 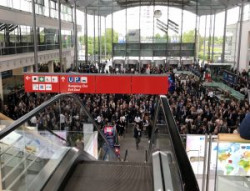 FESPA 2019 returned to Munich from May 14 – 17, and certainly seemed to live up to its "explosion of possibilities" strapline, with a plethora of applications on display demonstrating ongoing diversification within print. Established businesses branched out beyond their core segments as industry evolution and convergence, in digital print technology especially, continues.

Walking the halls of the Messe, this expansion was palpable, with a number of market segments more firmly in the spotlight at FESPA than ever before. The most notable example was textiles, which was heavily woven into the fabric of this year’s event; not only was it clear from a number of the major manufacturers that textile was an area of increasing focus, bu it was more crucial to FESPA’s roadmap than ever as well.

Décor applications showcase Printeriors displayed both interior and exterior décor for the first time, building on its visitor experience approach with colorfully-patterned bean bag chairs, metal garden furniture, deck chairs, parasols, and signage in a communal outdoor area between halls. Despite intermittent drizzle, many visitors spent sunny interludes enjoying the vibrant outside space with a coffee or, later in the day, a nice cold German beer. The ‘fast fashion’ area, Print Make Wear, took over close to double the space dedicated in Berlin last year, following strong interest in seeing the entire production cycle of a garment and the technologies involved, from design to the finished product. 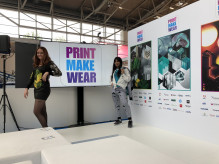 FESPA used the 2019 event to reveal its new event, Sportswear Pro 2020, running alongside next year’s Madrid show. Michael Ryan, group exhibitions manager at FESPA and event manager for Sportswear Pro, said: “Our core FESPA community is heavily engaged in the production of sports apparel, with 80% of textile printers active in this dynamic segment, according to our 2018 FESPA Print Census.”

The enthusiasm for sportswear didn’t stop with FESPA; HP’s booth had athletic apparel and imagery in abundance. It may have taken a while for HP to firmly plant its flag in the textile market, but there is no doubt now about its plans to disrupt the burgeoning sector as it launched its flagship model in the new Stitch family of dye-sublimation machines, the superwide 126-inch S1000. The new model prints direct-to-textile and transfer, and can reach speeds of up to 220sqm/hr.

The Stitch S range was seen for the first time in the European market at this year’s FESPA, and also includes the S500 and the entry level S300, debuted earlier this year at ISA in Las Vegas. HP claims to be ‘reinventing dye-sub’, and it’s clear that they see areas reliant on synthetic fibers such as sports apparel as crucial, with HP’s global business director, textile printing Ester Sala Albornà describing polyester as the ‘dominant fabric’, for which they have the highest expectations for growth. According to HP, polyester accounts for 60% of material by square meter in the $3.6bn digital market.

Canon added to its UVgel range with the launch of the new Océ Colorado 1650 64-inch roll-to-roll production printer. As with other manufacturers showcasing new technology and updates, Canon is meeting customer needs when it comes to diversification of offering. The new model has the potential to allow users to explore new revenue streams. The Océ FLXfinish incorporated within the machine means users can choose between a matte or gloss finish without the need to change inks or substrates. 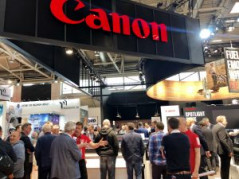 Michael Tuscano, vice president, large format graphics, Canon EMEA, said: “The fact that we can now also offer the additional choice of matte and gloss prints at the push of a button is a very exciting development for graphics producers, enabling them to unlock new business opportunities in premium interior POS and décor, with a single printer and without switching media or inks.”

Meeting customer needs around productivity, efficiency, and consistency featured heavily at the event, more so than any earth-shattering technology launches. Exhibitors were enthusiastic about demonstrating that investing with them isn’t just buying a new machine, but in investing in their product and service ecosystems as a way to elevate your business and differentiate from competitors. With the launch of new additions to its P5 portfolio, Durst was keen to highlight how the combination of its machines and its modular software solutions boosts workflow efficiencies, championing the tagline ‘From Pixel to Output’.

The Italian manufacturer launched the P5 350 and the P5 210 hybrid printers, alongside Durst Workflow, Durst Analytics, and Durst Smart Shop software. Head of product management Andrea Riccardi said at the event: “We don’t focus only on the pure print speed of the machines, we consider the efficiency of the whole printing process. With these new machines, we have introduced new and interesting features which lead to increased and improved productivity and efficiency.” 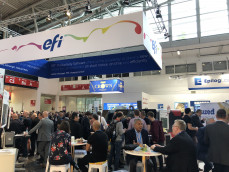 EFI chose to launch the ‘next generation’ of its wide-format flatbeds, the Pro 30f LED UV machine, marking the first new piece of kit to be unveiled since CEO Bill Muir took the reins in October 2018. The company describes the new piece of equipment as being ‘designed for more application possibilities at a competitive price’. Vice president of marketing for inkjet, Ken Hanulec, said: “We saw an opportunity for industrial class applications, and expanding our entire application range. The new maximum media thickness is 10cm, opening up all sorts of new applications in terms of wood, metal, glass, stone — the list goes on.”

Diversification was also on the menu at the Mimaki booth, where the manufacturer focused on four key areas; sign graphics, industrial products, textiles, and 3D. The booth was a ‘celebration of application diversity’ and promised to demonstrate how customers could use Mimaki technology to explore new markets. Marketing manager, Mimaki EMEA, Danna Drion, said: Unlike some of our competitors, we’re able to adapt quickly to market changes and customer opportunities to deliver constant system improvements or brand-new innovations.

“We head to FESPA 2019 with a product portfolio that epitomizes this capability. In addition, we will use the show to educate the market — showing a wide range of successful and profitable applications enabled by our printing solutions, driving increased customer revenue.” European audiences also had their first opportunity to view the manufacturer’s newest entry level flatbed UV inkjet printer, the JFX200-2513 EX, capable of double the speed of its predecessor, the JFX200-2513.

Lines are continuing to blur, in regard to target audiences for the show, the markets towards which new technology is aimed, and the segments in which print service providers are operating. This means that next year is set to be particularly interesting as FESPA takes a brief jaunt to Madrid (before a swift return to Munch in 2021), earlier than usual in March, due to the fact, of course, that it is a drupa year.

However next year’s adjacency to drupa impacts the event, results from 2019 shouldn’t dampen any spirits in the FESPA team. While final visitor figures are yet to be made available by the show’s organizers, they state that more than 13,000 unique visitors flocked to Messe Munich over the course of the first two days, making it entirely likely the event can match a figure around the 20,000 mark, as it did in Berlin and in Hamburg prior to that.

Karis Copp is an NCTJ-trained journalist and writer based in Bristol, currently carrying out freelance work in Bristol and London. She has experience writing for B2B retail publications, SEO content writing and editing for commercial websites, as well as fashion and lifestyle blogging and broadcast journalism/presenting.