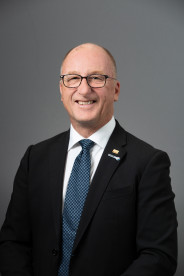 For companies coming to wide-format from analog printing, that first digital machine may feel like a toe in the water. Should they wade slowly into new waters, or simply jump right in? For many companies, digital conversion is a slow, gradual process. For others, it is a transition made with intention, and performed through bold moves.

To gain a better view of how one company boldly and gracefully undertook its own digital conversion, I spoke with Scott Crosby of Transcontinental Holland & Crosby, of Mississauga, Ontario, Canada. The company started its digital conversion in 2004, and in six short years, had transformed itself to 100% digital through careful capital investments and an “all in” approach to new technology.

What was the timeline behind your company’s expansion into wide-format digital, and what are some of the strategies used and benefits seen?

In June 2004, we purchased the digital assets of a small shop to bring digital print production in-house. We had been farming it out for several years and felt it was time to bring it inside to complement our screen printing operation, specifically for short runs up to 25 prints.

By the end of 2004, we had decided to upgrade to the Inca Columbia Turbo Flatbed (12 – 15 beds per hour) and the Vutek 3360 roll-to-roll press, to increase our capabilities and reduce our dependence on screen printing. In February 2008, we installed North America’s first Inca Onset flatbed. In January 2009 we added the Inca S20 which gave us the ability to print white as well as four-color process. In October of that year, we switched out the Vutek for a Durst 320, which was faster, had better print quality, and could do reliable double-sided printing. By February 2010, we’d sold off our last screen printing line and all of its related periphery, and were 100% digital. In 2016, we swapped out the S70 Onset and the S20 Onset for the North America’s first Inca X3 Onset (180 beds per hour) and the X1 Onset (4cp +white & special orange).

At one point in our screen printing days, we had 17 employees working in the print department. After the conversion to digital, we had three. So, the fourteen bodies we saved in the printing department alone accounted for a savings of over $1.2 million over 3 years, let alone the speed and quality of output and reduced set up times. Our approach was similar to buying a computer: we would buy the very biggest and best units we could afford, because they would be obsolete within months. We always planned to have the units pay for themselves in 3 years, and be off our books in four years, to be sure we were in position to take advantage of the next leap in technology. Each of these equipment decisions were based on replacement technologies and their inherent ROIs.

What did your company do to simplify prepress and finishing steps to increase efficiency and print reliability from press to press? What was the hardest part of doing this?

Finishing was the first area to address. There is no sense printing faster if you can’t keep up with finishing. One challenge was dealing with a 5x10’ sheet of material versus the smaller and variable sheet sizes we dealt with in screen printing. We added two Zund digital cutters to handle a 10’ sheet width-wise, and added an automatic feeder to one of them. Also, we replaced our two 61” guillotine cutters with one at 127”. This enabled us to keep most of our finishing needs in-house, instead of sending work out for cutting.

In prepress, we added workflow software from Esko and T-flow to help automate the preflight process. The other thing we did was enroll our prepress and press operators in the Color Management Program offered by SGIA. That was a big success in getting our team to manage color across three devices.

The other big challenge was to get everyone in the building to understand “pit crew” mentality. If the presses aren’t running (because they’re waiting for files or stock), then we’re not making money. Everyone needed to be focused on reducing downtime.

Can you describe your current technology mix, and the strategy behind it?

We are operating two flatbeds and one roll-to-roll press, so we have total flexibility. Hybrid units are good if you don’t have enough volume to justify two machines. If you do, you’re much better off with machines that are dedicated to a single platform. For us, the biggest part of being efficient is reducing downtime. So by having flatbed and roll-to-roll instead of a hybrid machine, we save set up time in switching from one platform to another.

How Did COVID-19 Impact Catalogs?
END_OF_DOCUMENT_TOKEN_TO_BE_REPLACED