A year full of uncertainty is capping itself off in a similar fashion as questions continue to swirl around the results of the 2020 elections. As things currently stand, Former Vice President Joe Biden has secured enough electoral votes to become the 46th President of the United States.  Although President Trump has yet to concede the election, it may be time to start considering how the new administration’s policy changes can affect both business and the industry as a whole.

Part of Joe Biden’s tax plan includes raising the corporate tax to 28%.  This is a seven point increase from where it stood the at beginning of 2018 with the passing of the Tax Cuts and Jobs Act.  While a seven point hike may seem drastic, it is still not near the 35% rate that was implemented by the Clinton Administration in 1993 and lasted until 2018.  In fact, rates have not been lower than 30% since 1940.  These new tax increases will likely only affect larger businesses, those who file corporate tax returns, while smaller firms that operate as s-corporations or partnerships should avoid most of the extra burden. When the initial tax cut was passed in 2018, many firms reclassified in order to take full advantage of the tax benefits.  Moving forward, some of these entrepreneurs may want to reconsider this decision and reclassify their organization to best fit their needs and situation.

The graph below shows how the corporate tax rate has changed over time: 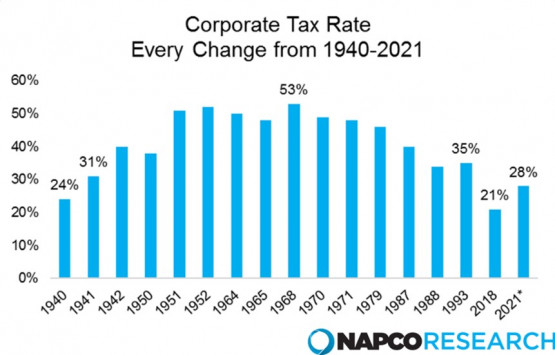 When Biden takes office, he also has a few preliminary tax plans in place that he hopes will help keep American business on American soil. The first part of this plan will introduce a “Made in America” tax credit.  This would give a 10% tax credit to companies “that restore production, revitalize existing closed or closing facilities, retool facilities to advance manufacturing employment, or expand manufacturing payroll.”

In addition to this, an additional surtax of 10% would be applied to the sales of products or services from foreign subsidiaries of U.S. companies to U.S. customers.  The goal of this, of course, is to keep American production on American soil.

Although the exact details haven’t been hashed out quite yet, Biden will also seek to punish firms who move their headquarters to a foreign jurisdiction to take advantage of lower tax rates.

When Joe Biden takes over, one of the changes that he can make without congressional support is the elimination of the Trump imposed tariffs.  Although this is the case, Biden has not made it clear as to whether or not this is something that he will scale back either fully or partially.  In his platform he emphasizes that he will make trade policy work for U.S. farmers, but has not released much info on how he plans on handling  goods like steel, aluminum and other metals which could affect both printing press and plate production.

If Biden wants to strengthen domestic production, then it is likely that these tariffs will not be pulled back completely, especially with China. While the relationship between the U.S. and China has certainly soured over the past few years, it will be interesting to see how Biden approaches the situation.  He has spoken out against the way China operates and called for pressure to be put on them in the past, and if he thinks that the tariffs are the proper way of applying this pressure, then the framework that is in place may remain.

Part of Biden’s “Build Back Better” plan involves heavy investment in manufacturing.  Aside from all of his other policies that can help aid sector growth, he also plans on budgeting government dollars for the cause.  While the specific number seems to be omitted from his campaign website, while on the election trail, he has mentioned that his investments would create around 5 million manufacturing jobs.  This would come as he has said investments will be made in infrastructure, clean energy and research and development.  He would also push to fully domesticate critical supply chains which can add production jobs to the U.S. economy.  While domesticating the supply chain is mainly a COVID-related concern, having the labor and capital in place could evolve into other opportunities as we move past the virus.

Specific investments that he has mentioned include committing $400 billion federal dollars over a 4 year period to purchasing American made products.  This includes “green vehicles”, construction materials, and critical medical supplies to restore the stockpiles that have been depleted throughout the pandemic.  An additional $300 billion would go towards investment in advanced technologies like electric vehicle and 5G development.

Over the past four years, the future of the United States Postal Service seemed uncertain.  There were questions as to whether or not it could survive unless it was privatized although it was never intended to be a profit center for the government.  While on the campaign trail, Biden has cleared the air and said that he would never push to privatize the service.  Although it is unclear how much, he has also promised an infusion of cash as the post office is projecting a loss of about $9.7 billion by the end of the fiscal year. The USPS is required to use billions per year to pre-fund the health plans of future retirees and the new administration has discussed relaxing some of those requirements.  Some worry that this can potentially cause funding issues down the line but it may be necessary in order to keep the post office up and running in the near future.

We should also expect additional investments into the USPS to fund things like electric vehicles in the future.  If done correctly, this can be a major cost saver for the organization and will help ensure a long life for the service.

Small business can potentially be burdened by an increase in the federal minimum wage to $15 per hour.  This will obviously create additional costs for business owners moving forward  and some may need to reevaluate the size of their workforce.

The Biden administration will also try to increase the Social Security payroll tax as the future of the program may be in jeopardy.  This increase would not affect many Americans however as it will only cost those who earn $400,000 or more annually.  If this hike is put into effect, the increased cost would likely be split between the employee and the employer.

Aside from the previously mentioned investment in cleaner transportation, the Democratic party has their eyes set on addressing major environmental issues.  There will be investment in R&D for greener technologies across the board and they will also attempt to put the U.S. on a path to become a net-zero carbon producer by 2050.  As of now, there are plans to invest in upgrading homes and other buildings to make them more energy efficient but there is also the possibly of carbon tax.  Other enhancements in this area include tax credits for those who invest in and produce renewable energy sources.  There may also end up being more talk about investing in new energy storage technology and other alternative sources like biofuels.

What to Know About the Vaccine Mandate & OSHA ETS

How Did COVID-19 Impact Catalogs?
END_OF_DOCUMENT_TOKEN_TO_BE_REPLACED