The first half of 2020 has been burdened by one of the most brutal economic environments printing operations have likely ever experienced.  While some economic indicators in the last month have been boosted by pent-up demand, optimism and other factors, a summer surge in virus cases will likely temper previous economic gains moving forward.  States facing surges in cases have already begun to roll back or halt portions of their reopening process and will surely institute additional guidelines to prevent further spread.

Although a rise in cases will certainly set our economy back, it does not discount the clear steps toward recovery that the country has seen over the past few months:

Without these positive strides, the second wave of cases could have forced the economy to a new bottom, greater than the deepest parts of contraction earlier this year.  In fact, many economists and analysts still believe that the worst is over and although full economic recovery may be delayed, things will continue to head in a positive direction aside from a few speed bumps.

Many printers echo this sentiment.  In the second COVID-19 Print Business Indicators Report, participants indicated that activity as well as optimism was rising across all segments compared to the deepest days of the crisis.  Throughout March and April, only around 5% of printers indicated that their sales, production, work on hand, and quote activity were trending upward.  Since then, things have meaningfully improved for these companies.  The figure below shows that more than 25% of firms surveyed report that sales, production, and quote activity rose, while just under 24% of respondents report work on hand trended upward. While this is a long way from where the industry wants to be as more than 70% are still seeing these metrics decline or stay the same, it is a vast improvement from the deepest part of the downturn. (Figure 1) 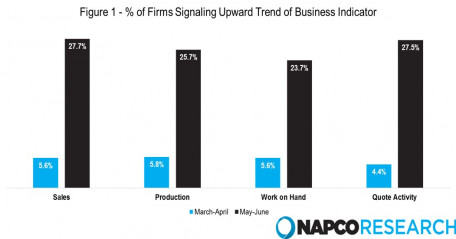 Moving forward, one key factor that will have a major effect on the economy and printing industry is the type of coronavirus aid package that the U.S. government passes.  While a $400 weekly supplemental unemployment payment and a halt on payroll taxes for those earning less than $100,000 was passed through an executive action by President Trump, Congress is still struggling to agree on a new coronavirus aid package.  It is assumed that there will be another $1200 stimulus check sent out as soon as the end of August which will help boost consumer spending, but many other details are still unclear.

Business owners will be focusing on a different portion of the bill. Many are keeping an eye out to see if there will be either an extension of the Paycheck Protection Program or new small business aid in another form. It is almost certain that there will be some sort of aid, but the exact plans are still being debated.  According to data collected from the second COVID-19 Print Business Indicators survey, the PPP had a major effect on keeping industry employment stable. According to the survey results, those respondents who applied for the loan had higher expectations with regard to maintaining staff levels than those that did not apply for the program. Responses to open-ended survey questions reflect that companies believe PPP played a big part in stopping large-scale employee layoffs and/or shuttering operations.

Potential Challenges for the Second Half of 2020

While overall employment has improved consistently since the initial drop that came from the first large-scale closures, the pace of jobs added per month has tempered a bit. While the country is on a pace that would erase the deficit by March, a worrisome issue at the moment is the number of people considered “long-term” unemployed. The number of people unemployed for more than 15 weeks has passed the number unemployed for 5-14 weeks and less than 5 weeks.  It will be hard for these people to reenter a loose labor market and they may soon exhaust their own unemployment benefits.

As fall approaches, many are concerned about the status of school openings.  This affects print directly as many who print decorations, promotional products for school events, uniforms, etc. will be severely hurt if students don’t return to the classroom.  It could also affect many employees regardless of their industry.  According to a report by Northeastern University, about 13% of parents have either lost jobs or reduced their work hours because they could not find childcare throughout the pandemic. If schools don’t open in the fall, this problem could be exacerbated, and companies and employees will have to develop a solution for the issues that will surely result.

As mentioned previously, consumer spending is the anchor of our economy as a whole.  A metric that gauges consumer confidence is produced by the University of Michigan and is released on a monthly basis. The index of consumer sentiment has a base value of 100 (1966) meaning that every point increase or decrease represents a percentage change in confidence in relation to the base year. In the last 50 years this metric has been as high as 112 and as low as 51.

For a more recent comparison, the metric was at 99.8 in February before shutdowns began. While the June reading hit its highest point since the pandemic began (78.1), the July number slumped a bit (73.2). This indicates that the rise in virus cases coupled with the slight rise in initial unemployment claims near the end of the month may have undermined confidence slightly. As more of the economy re-closes, it is expected that this number will continue to drop which could mean that retail, along with other industries could see a drop in sales.  A second stimulus payment could encourage people to go out and spend which may prevent this drop.

Epson and the LPGA Elevate the "Road to the LGPA"

Why Printers Should Care About Repeats
Comments
COVID-19 Resource Channel

How Did COVID-19 Impact Catalogs?
END_OF_DOCUMENT_TOKEN_TO_BE_REPLACED