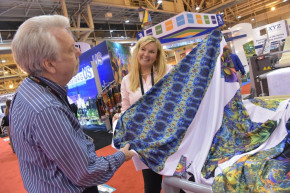 It’s a little hard to explain how, despite the many years I’ve spent covering print industry events, I never got around to attending an SGIA Expo until I took part in the one that ran in New Orleans from Oct. 10-12. To state the obvious, I had no idea of what I was missing. Now I see that I’ve missed a lot - but in light of a major announcement made just before the show, I expect that gap in my knowledge to close very rapidly.

What a dazzling showcase the 2017 SGIA Expo was. The association that owns it, the Specialty Graphic Imaging Association, bills SGIA Expo as the biggest event of its kind in the industry, and a glance around the vast hall it occupied in the Big Easy’s Ernest N. Morial Convention Center witnessed the truth of that claim. But the event’s size, impressive as it is, isn’t all there is to its unsurpassed stature as a trade show.

What really distinguishes the SGIA Expo is its diversity. Never before have I seen the visual impact of graphic communications exhibited as stunningly, or in nearly as many different formats. Even drupa with its endless halls and its mountains of machinery doesn't celebrate what graphic reproduction technologies are capable of as exuberantly as the SGIA Expo does. 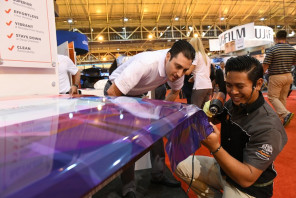 Because the show spans such a broad range of these technologies, it’s a difficult event to characterize in a few words. Recalling the meters-wide inkjet printers and comparably sized finishing devices that were everywhere to be seen on the floor, I’m tempted to call it a wide-format show. But that description fails, because it leaves out the screen presses, the multi-station embroidery machines, the dye-sub garment presses, the heat transfer printers, the laser engravers, and all of the other specialty hardware that contributed to the show floor’s peerless range of capabilities.

What knitted it all together? What was the unifying theme? That’s something else calculated to make a glib answer look foolish, but I think that one exhibitor I spoke with came close to nailing it when he said his products were about “building visual value.” The message behind the show’s technical panorama was that visual value can be built upon, or added to, almost anything: whatever kinds of physical surfaces that inks, dyes, and other decorative materials can be made to adhere to.

For those grounded in commercial and publication printing, direct mail and packaging, this means remembering that printing on things we wear, inhabit and handle as 3D objects is as much a part of graphic communications as the mainstream applications. “Mainstream,” though, is beginning to sound like a distinction without a difference. What the SGIA Expo made clear is that all of these processes are converging not only as graphic technologies, but as business opportunities for print service providers who want to modernize the definition of what they do and broaden the scope of the revenues they earn. 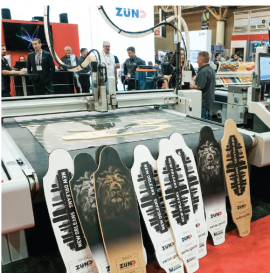 As I walked the aisles, it occurred to me that the majority of the stories I’ve filed in recent years have been about precisely this - printing companies making money by doing things they hadn’t previously done with the help of systems and equipment that hadn’t been considered relevant to the niche of the industry they belonged to.

Wide-format output is a good example. Commercial plants typically didn’t offer it until owners began to realize that customers buying signature-based work from them probably also were buying signs, banners and store graphics, but from someone else. Installing a wide-format inkjet device and finishing equipment brought both strands of opportunity together, locking in customer loyalty and opening up a new path to profitability.

When it happens this way, convergence can be a best practice for printers. As traditional markets contract, many commercial plants are finding it hard to grow their core businesses. Adding new, complementary capabilities not only creates fresh revenue streams but enhances the value of the company in the eyes of potential acquirers (even if being acquired isn’t part of the near-term strategy). 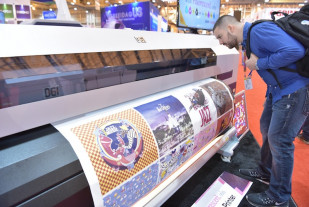 Because the SGIA Expo had so much to offer, it was a laboratory for the possibilities of industry convergence. This isn’t to suggest that printers can embrace everything it contained: some of the technologies on exhibit were highly specialized, and a few seemed downright exotic. But, a closer look at others was intriguing.

This definitely was the case when I stopped by the stand of a maker of flatbed devices for computerized plotting and cutting. Commercial printers don’t do a great deal of that, but this manufacturer offers an extra that might induce them to start thinking about it: a library of 2,300 packaging templates that can be cut to order, minus the high cost of diemaking, for prototyping and small runs. Invest in the machine, and leverage the built-in applications - an opportunity perhaps too good for some to pass up.

This was typical of the kinds of inspiration to be found at the 2017 SGIA Expo, and it demonstrated that convergence isn’t a passing buzz but the resonant hum of an industry in the midst of an important transition. Now the challenge is to do justice to the full scope of that transition - which brings us to the significance of the big news that broke the day before the exhibits opened. 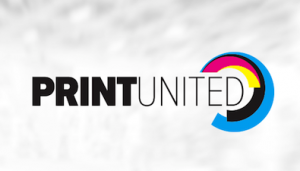 This was the announcement of the creation of PRINTING United as a joint venture between SGIA and NAPCO Media. PRINTING United, an entirely new trade show platform, will thrive on convergence as it makes the riches of the SGIA Expo accessible to the commercial, in-plant and package printing segments in a format that the industry hasn’t seen before. The vendors have been asking for - truth be told, clamoring for - a consolidated venue of this kind for as long as I’ve been going to shows. The answer was elusive, but now, at last, all of the necessary pieces are there to be fitted into place.

With the solid base of the SGIA Expo to build upon, PRINTING United will have strong momentum straight out of the gate. The commitment of the vendors participating in the New Orleans show was obvious, and that implied endorsement will help SGIA win support for the emerging platform from new and returning exhibitors alike. NAPCO Media, with multiple channels in the commercial printing, packaging, in-plant, marketing and promotional products spaces, furnishes the tools the joint venture will need to drive interest in PRINTING United and position it as an event that addresses the entire print value chain - brand owners, marketers and buyers included. 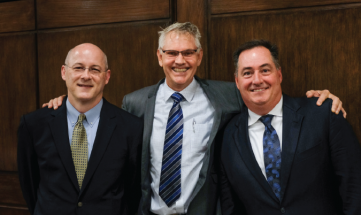 From the left, Ford Bowers, CEO and President, SGIA; Rich Thompson of Ad Graphics, Chairman of the SGIA Board of Directors; and Mark Subers, President/CRO – Printing & Packaging, Publishing, NAPCO Media.

In this way, PRINTING United will become the one-stop destination for equipping to deliver the kinds of integrated solutions that today’s print service providers have to be able to provide if they want to remain competitive. There’ll be something in the event for virtually every member of the industry, but the biggest beneficiaries will be print company owners looking to take their businesses to the next level. Next levels, after all, are what trade fairs exist to show off - and PRINTING United will be chock-full of them for printers to see.

Preparations for PRINTING United will be in full swing by the time the SGIA Expo hosts its farewell edition in Las Vegas from Oct. 18-20 next year. My intention is to be there, and with any luck, I’ll also be on hand for PRINTING United’s premiere in Dallas from Oct. 23-25, 2019. In the meantime, count on hearing more news from SGIA and NAPCO Media as plans for the new event take shape. It’s a terrific story, and sharing the details is something this writer is sincerely looking forward to doing.

PRINTING United Brings Industry Under One Roof for Monumental Expo

Mimaki Celebrates 20 Years in the Americas