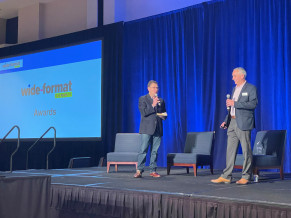 The final day of the inaugural Wide-Format Summit ended on a high note last week, with sponsors and attendees alike extoling the benefits of the small, hosted-buyer format, which offers the chance to make meaningful connections while gaining valuable insights and information. Already, many were starting to think about next year’s event, which will be held in Palm Beach Gardens, Fla., July 25-27, 2022. To learn more about the event, or to apply to attend next year, visit wideformatsummit.com/attend.

One of the highlights of the final day was the awards, given out for a variety of categories to both attendees and sponsors. This year, the winners of the best case studies were HP for its textile presentation; swissQprint for its presentation in the roll-to-roll category; and Agfa, for its flatbed presentation. In addition, Tilia Labs also won the award for “Company to Watch” — an award the company also won at the Inkjet Summit, the sister event held just prior to the Wide-Format Summit. The award goes to the company with the most interesting solutions, going in the most interesting direction, and which attendees are looking forward to learning more about in the future.

On the attendee side, an award was given to the person who contributed the most, and it was noted that for this first year, it was a tough decision, since everyone there participated fully in the experience. In the end, Elaine Scrima, VP of operations, GSP Companies, was given the award as the person who went above and beyond in their contributions to the event and engagement throughout the entire process.

Planning for Every Eventuality 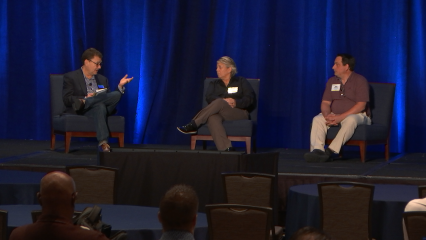 The final day of the event kicked off with a session titled “The Art of Contingency Planning,” which was moderated by Steve Duccilli, co-conference chair, NAPCO Media. Panelists included Scrima, and Ben Ritacco, VP - specialty print and fulfillment, CCG Marketing Solutions, who both talked about their experiences with contingency planning, and the challenges to watch out for.

Both shops, noted Duccilli, have “done some pretty progressive things planning for the ‘what ifs,’” and they were both very willing to share their experiences. For Scrima, the realization that she needed a solid contingency plan started in 2018, after Hurricane Irma. “We were not as prepared as we thought we were,” she said. It led her to ask a lot of questions, such as what are the essential elements of the business that needed to remain operational so work could keep flowing, and what needed to be done to facilitate that.

Hurricanes were also the catalyst for Ritacco, who cited Sandy and Irene in 2012 and 2013 as the events that made him realize he needed a formal plan. “We weren’t directly hit, but the business was cut off by the floodwaters,” he said. “I quickly realized we had to have some kind of contingency plan.”

One thing they both stressed is that a good contingency plan doesn’t spring forth fully formed; rather, it is a work in progress, and, as Scrima noted, “every year we find something to improve upon.”

To get started, Ritacco suggested talking to customers first. “Reach out to your customers and find out their needs and expectations, and then build your plans around them. That will dictate what they expect in a worst-case scenario.”

From there, talking to vendors and understanding their own contingency plans can be a great base to build from, as it is important to know what they can and can’t do if the worst happens, such as supply chain disruptions. Planning your shop’s contingencies around supplies that may or may not be available will lead to procedures that are less than effective. Knowing up front what is reasonable to expect is critical to a good plan.

IT infrastructure is also an important component, both Scrima and Ritacco noted, citing the ability to stay in communication with vendors, customers, and employees can lead to the success or failure of an emergency plan. Things such as having off-site servers or partnerships in place before a disaster strikes can mean the difference between continuing to run the business and being forced to shut down for a period of time.

To get started, both panelists noted that sitting down and identifying the most critical parts of the business, as well as the most likely pain points, is a great place to start. Don’t plan to go in and make sweeping decisions for how every possible event or situation should be handled. Rather, start small, and every year build upon it.

“I would highly suggest you start small, with the low-hanging fruit you can do inexpensively, and then work your way up,” Scrima said. “Put a line item in the budget every year — it does cost money, but once you hit a certain level, then it’s just maintenance.” She notes that starting with looking at the absolute minimum that would be needed to keep the business operational is a great place to start, and then each year look at what worked and what didn’t, or what could be improved on, and then expand it. “Say, ‘we failed here, so how do we fix it?’ And then the next year, say ’that’s stable now, but what about this?’ It’s like building blocks — continue to build on it.”

Ritacco noted that shops shouldn’t make the mistake of creating a plan and then forgetting about it, thinking it’s done. “When you think it’s over, it’s not over,” he stressed.

At the end of the day, they both agree that having a contingency plan in place that covers everything from extreme weather, to fires and floods, and yes, even pandemics, should be a critical part of every business’ long-term planning. It is too important to ignore, they explained. 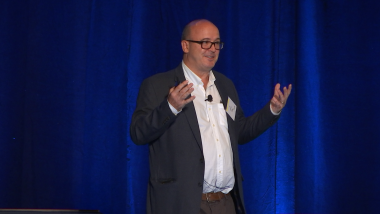 The final main educational session of the 2021 Wide-Format Summit was given by Tim Greene, research director for IDC, titled “Designing Your Move Into Digital Textiles.” Textiles, he noted, are projected to be worth as much as $2.78 billion by 2024, but right now only about 5-6% of textiles are printed digitally, representing a truly massive opportunity for wide-format printers with digital textile printers. In addition, right now more than 50% of all textiles are produced in Asia, which comes with issues around not only supply chain, but also sustainability concerns when it comes to shipping heavy bolts of fabric long distances. Digital printing, he noted, is well positioned to be an answer to this market.

He noted that wide-format print shops don’t necessarily need to immediately run out and invest in a lot of equipment to get into this space. In fact, he stated, almost 75% of shops selling digital textile printing are outsourcing the work right now. The pros to that model, he said, is the ability to enter the market without any capital investment, growing a new business segment without a lot of risk. The cons, however, is a lack of control — “you will have to trust that who you outsource to will have the same service and quality requirements you do, and that can be an issue,” he noted.

For shops that are interested in bringing it in house, he noted that it doesn’t have to be an all-or-nothing proposition, with many direct-to-garment (DTG) printers now available for under $5,000 at the low end, making them a great way to begin to explore digital textile printing in-house. That scales up to machines that can cost upwards of $500,000, which bring not only capacity increases, but additional capabilities that allow shops to expand with more colors, more finishing options, and even more automation. It provides a great path forward as the business grows and expands and allows shops to get started for a low investment, but upgrade as demands increase. “There is a scale to enter these markets,” Greene said.

He then broke down three of the barriers to entry that many perceive as preventing them from adding digital textile printing to their service mix.

Greene ended the session with a note that 75% of printers are already thinking about what they can do next, and digital textile printing is at the very top of that list, for everything from T-shirts to interior décor. “Demand for digital textiles is growing. You can produce it yourself or outsource it, but get ready,” said Greene. “Start thinking about how to market it.”

Showdown Displays to Have Virtual Showroom in 2022

Why Should You Attend COLOR22?

How Did COVID-19 Impact Catalogs?
END_OF_DOCUMENT_TOKEN_TO_BE_REPLACED